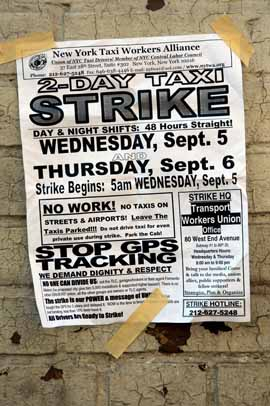 It was a good day to ride your bike in the Big Apple. New York City cabbies launched a two-day strike on September 5, leaving the city’s streets quiet and would-be passengers scrambling. Taxi workers were protesting a plan to install new technology into the city’s yellow cabs, a move they said would hurt both passengers and drivers.

The strike was called by the 10,000-member New York Taxi Workers Alliance (NYTWA), an organization representing cab drivers across the city.

City officials were quick to downplay the impact of the strike, calling it a minor inconvenience. Mayor Bloomberg claimed only 20 percent of the city’s cabs were idled by the strike. But organizers report that 90 percent of drivers stayed away from work during the strikes first day, based on early morning traffic out of the major taxi garages located in Queens.

By the afternoon of the strike’s first day a trickle of yellow cabs appeared in Manhattan hot spots like Times Square, but passengers were greeted by long lines, and an impromptu system of shared rides and flat fares. The New York Times reported that passengers arriving at the city’s airports waited up to half an hour for a taxi, up from a typical wait of five minutes.

Cabs parked at a large Queens garage on the first day of the strike. Photo Mizue Aizeki.

"Just look in the streets," said striker David Salazar, who has been a cab driver for 12 years. "There’s almost nobody out in Manhattan and the lots are empty at LaGuardia and JFK [New York’s two major airports]."

On the strike’s second day supporters reported growing participation among drivers. NYTWA Executive Director Bhairavi Desai said: "The strike is in full effect. It’s empty at the airport taxi lots, empty on the streets, and at the garages…Drivers have held strong."

The controversy escalated in May when the Taxi and Limousine Commission (TLC), the municipal agency that oversees New York’s cab operations, approved a plan to install global positioning system (GPS) systems, touch screen monitors, and credit card readers in the city’s entire fleet of yellow cabs.

Installations are scheduled to begin October 1, with all cabs expected to be equipped with the new technology by February 2008. Many drivers, however, have taken a dim view of the plan—particularly since they’ve been required to foot the bill for the new systems.

New York's Taxi and Limousine Commission plans to have video monitors installed in every yellow cab in the city by February 2008. Photo by s j b on Flickr

"This is not a navigation system," Salazar said of the GPS technology. "It won’t help passengers or drivers get where they are going. It’s all about advertising." Backseat video monitors are currently designed to play commercials and movie trailers on a continuous loop.

Salazar continued: "Why is the city forcing us to put credit card readers into our cabs? They aren’t forcing any other businesses in the city to accept credit cards. It should be optional."

Muhammad Hossain, a 17-year taxi veteran, concurred. "This is about making money. The people who will benefit are the companies selling the systems. They cost $4,000 to install, and up to $175 a month in maintenance fees. That is all money out of our pocket."
Hossain also said that the credit card machines are unreliable. He explained: "They are like cell phones. Sometimes they get a signal, sometimes they don’t. We’ll lose at least one or two trips every shift with these machines, not to mention the 5 percent transaction fee they will take off the top of every fare."

On the eve of the strike, tensions escalated, sometimes turning violent. Dipak Ghosh, a taxi driver with five years on the job, was assaulted by a TLC inspector September 4 after dropping a passenger off at the Port Authority bus terminal. "[The inspector] said I didn’t record going off-duty in my trip sheet," said Ghosh. "Then he dragged me out of the car and threw me on the ground like he was going to arrest me."

Ghosh walked the picket line wearing a ripped t-shirt, evidence of his run-in the day before. He said, "It was clear he was harassing me because of the strike plans. I wasn’t involved [with plans for the strike] before, but now I realized we have to be united to survive. If they can do this to me, they can do this to anybody."

Since the job action both the TLC and the Mayor’s office have refused to meet with the taxi workers, a move Desai calls "beyond insult." City officials contend that plans for GPS implementation are moving ahead.

The NYTWA has responded with a class-action lawsuit, alleging that the GPS system is an unconstitutional invasion of privacy, with hearings scheduled for September 26.

The organization is also considering another job action prior to the October 1 deadline. At a September 18 membership meeting 350 nighttime drivers authorized a second strike if they city does not suspend its GPS program.

Referring to the possibility of second strike, Bill Lindauer a 30-year industry veteran, remarked, "It’s a great sacrifice, but we have to do what we have to do."

Related
Inside the Alabama Amazon Union Drive: An Interview with the Lead Organizer »
Draw the Line in Permanent Marker: Three Organizing Principles »
Don't Guess What's on Your Co-Workers' Minds: Allow Yourself to Be Surprised »
In a Six-Day Strike, Bronx Produce Workers Doubled Their Raise and Inspired New York »
Bay Area Transit Unions Join Forces to Win Safety Protections and Beat Back Layoffs »