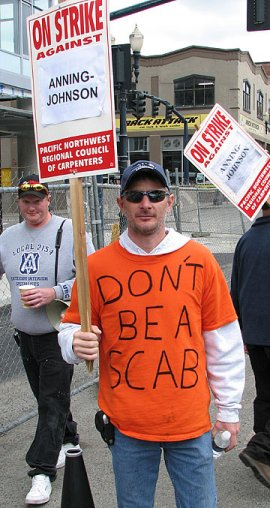 Editor’s Note: As Labor Notes went to press, the Carpenters announced that a two-year tentative agreement had been reached and the strike was over. Although full details have not been released, preliminary reports show that the agreement would raise wages by $1.85 an hour in the first year of the contract and $2.40 in the second. The agreement also contains a general amnesty for all union members who honored the picket lines.

These days, it’s impossible to make your way through Portland, Oregon without noticing the commercial construction boom. That steady boom was brought to a standstill June 1, however, by raucous picket lines manned by members of the Carpenters (UBC) at 28 construction sites in Oregon and southwest Washington.

About 1,300 UBC members who install drywall and acoustic ceilings are on strike in the region. They are demanding the same wage increases paid to their counterparts under the Western Washington master contract that covers Seattle and the surrounding area.

For these workers, the fight did not begin the day of the strike. With a new union leadership at the district council level and, for the first time, a bargaining team with rank-and-file members on it, workers have been organizing for months. This is the first strike for drywall and ceiling carpenters in 18 years.

The union began by recruiting rank-and-file “campaign captains” at each job site. Their task has been to coordinate actions and keep co-workers informed about negotiations.

They also got their fellow carpenters to two rallies this spring, one in Portland and one in Seattle, where over 5,000 UBC members from across the region came together to build solidarity for multiple regional UBC contract.

Many members who did not previously support the union have become deeply involved. Almost 96 percent of members voted to authorize a strike if demands were not met for wage increases of six, six, and 5.5 percent respectively for each year of the contract.

The week before the strike workers wore red armbands to show their solidarity, and many workers at the job sites from other unions wore them as well.

The employers’ final offer before the strike included raises amounting to 70 percent of those in the Western Washington contract. Beyond their own wages, the strikers are concerned that signing another substandard agreement could undermine upcoming negotiations for other UBC contracts as well.

The UBC represents wood carpenters, concrete form carpenters, millwrights, and other trades, with different regional master agreements with multiple contractors. Carpenters and other building trades workers saw their wage increases slide in recent years as the commercial construction industry slowed in 2001. But commercial construction has rebounded, and the union has gone on the offensive at the regional level to shore up existing contracts.

The strikers’ agreement is the second largest master labor agreement for the UBC in Oregon and southwest Washington. They negotiate with the Association for Wall and Ceiling Contractors, an employer group run by a handful of the largest drywall contractors.

Though this contract is with drywall subcontractors, the strike has had a wider impact. After two weeks of walls not going up, most other construction work, such as painting and plumbing, cannot be completed.

Because of high demand, most condominiums are pre-sold through a lottery, with move-in dates guaranteed with the sale. If the deadlines are not met, contractors pay a penalty to building owners. “The general contractors are going nuts over the strike,” said Sheckler. “Every day construction is delayed, it eats right into their profit margins.”

Many members of other unions who work at the same job sites have honored the picket lines, despite employer intimidation and conflicts among building trades union officials.

In particular, several members of the Operating Engineers who operate cranes on the high-rises have refused to cross. The strikers, said a member, could tell supporters who wanted to walk the line to “look up and find a crane that’s not moving and go there.”

Four of these crane operators were fired last week for refusing to cross. One Carpenter said, “By not crossing, it was very powerful what these crane operators did, because when no cranes are working, it effectively shuts the whole site down.” Several members of the Teamsters who refused to cross with truck deliveries were also fired.

Many UBC members who are concrete form or wood carpenters (and work under a different UBC contract than drywallers) have lost their jobs for honoring picket lines.

Members of the IBEW, Laborers, Glazers, and even non-union wood frame carpenters have refused to cross picket lines, despite orders from employers and union leaders. Said one woman wearing an IBEW t-shirt at a UBC rally on June 5, “I just don’t understand how a member of any union can hold their head high and cross that line.”

Related
As Omicron Rages, Teachers and Students Fight for Safety Measures in Chicago and Elsewhere »
Steward's Corner: Using Pressure to Settle Grievances »
UPS Drivers Stage a Walk-in to Defend a Fired Co-Worker »
Christmas On Strike: Warrior Met Miners Stick It Out »
Whatever Happened to 'Eight Hours for What You Will'? »