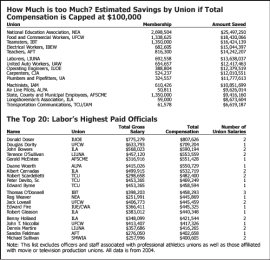 Correction: In our February 2007 issue we mistakenly listed Dennis Martire from the Laborers (LIUNA) as one of the 20 highest paid union officials in 2004. We erroneously combined the salaries of Dennis Martire Sr. and Dennis Martire Jr. and presented the total as that of a single individual.

In today’s labor movement, it’s hard to find a leader who doesn’t stress the need to organize new members. Judging by the size of their paychecks, however, some of labor’s top brass aren’t ready to put their money where their mouth is.

Meanwhile, private sector union density has fallen below eight percent, its lowest point in over 100 years.

In the run-up to the 2005 split in the AFL-CIO, discussion of excessive pay was noticeably absent, despite the focus of the Change to Win federation’s founders on channeling unprecedented resources into organizing.

Looking at total compensation, which includes things like meal and housing allowances as well as reimbursements for other union-related expenses, the numbers are even larger. In 2004 there were 9,036 officers and staff who collected more than $100,000 in union funds, for a combined total of more than $1.2 billion. Setting the bar at $150,000, we find 1,662 individuals who took home a total of $335 million.

How much money could the labor movement save by imposing a salary cap and eliminating multiple salaries?

Several individual unions could also benefit from lower official salaries.
Table 1 lists the 15 unions that stand to gain the most by limiting total compensation, with savings totaling as much as $200 million.

When asked what the Teamsters could do with an additional $16.4 million, Frank Halstead, a Southern California warehouse worker and member of Teamsters Local 572, remarked: “Trucking is growing, while our strength in the industry in shrinking. With that kind of money to spend organizing non-union truck drivers we could restore our power in the industry.”

Tony Perlstein, a member of International Longshormen’s Association Local 1588, was also clear about what an additional $8.6 million could mean for his union. Said Perlstein, “If we kept ILA officers’ salaries in line with the members’ salaries, our union would have the money we need to research and organize the logistics industry.

“There would be resources to coordinate international solidarity between dockworkers. We could take on non-union logistics companies at the port. And there would be money available for a serious contract campaign—with research, education, and mobilization—when our current contract expires in 2010.”

Beyond the missed opportunities for strategic campaigns or new organizing, excessive salaries can do lasting damage to union solidarity. Labor’s top earners fall into the upper reaches of U.S. income distribution, far removed from most rank-and-file members.

For example, any official or staffer earning over $157,000 in 2004 found themselves among the richest five percent of American households. Meanwhile the average union member earned $43,000 that same year, placing them just above the median individual income of $36,500.

Table 2 gives a sense of just how wide this gap can get, presenting a list of the 20 highest paid officials in the labor movement in 2004.

Donald Doser from the International Union of Operating Engineers (IUOE) was at the top of the heap that year. Doser pulled down $775,279 from two union salaries and, factoring in allowances and reimbursed business expenses, raked in a total of $807,626.

With union members everywhere getting squeezed by employers, fat salaries for top officials only widen the gap between elected leaders and the rank and file. According to Halstead, “These bloated salaries are a glaring example of what’s wrong with today’s labor movement. Some of these officials make as much money as the CEOs.

“With salaries like this they’re out of touch with regular members. They are more worried about how their stocks are doing and where they’re going to park their boat than how to win stronger contracts or organize new members.”