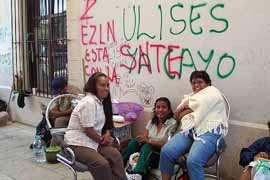 Despite an attack by riot police, teachers in the Mexican state of Oaxaca occupied Oaxaca City’s central square for weeks to press their demand for a wage increase. Photo: Clifton Ross.

More than 60,000 teachers in the Mexican state of Oaxaca, members of the teachers union (SNTE) Local 22, ended their 44-day strike on July 5 without having won their demands for higher wages and the resignation of Governor Ulises Ruiz Ortiz.

The teachers found themselves caught between two anti-union forces: President Vicente Fox of the National Action Party, who controlled the federal Secretary of Education, and Governor Ruiz Ortiz of the PRI, who controlled the state Secretary of Education. Each attempted to foist responsibility on the other, with neither making significant concessions to the teachers.

Teachers in Oaxaca have been among Mexico’s most militant workers for 30 years and they once again adopted their traditional tactic: strike and sit-in. They struck schools affecting 1.2 million students and then they organized a massive sit-in (plantón) in the state capital, Oaxaca City.

Tens of thousands of teachers took over the Zócalo (the city’s central plaza) and many of the surrounding streets and held them for weeks, continuing to insist on their wage increase.

To push for higher wages, Oaxaca teachers adopted the demand that the government should reclassify them as living in a high cost-of-living state. (The term for this in Mexico is rezonificación—that is, putting the teachers in a new pay zone.)

After 28 days with tens of thousands of teachers in his front yard, the notoriously repressive Governor Ruiz Ortiz sent in the riot police to remove them. At 4:30 in the morning on June 14 police from several different state riot police corps marched into the central plaza of Oaxaca and attacked teachers, many of them with their children, sleeping in makeshift tents and shelters of the plantón.

While some police moved in swinging their clubs, others threw tear gas canisters down on the crowd from a hotel window. A police helicopter also flew over the plaza dropping tear gas canisters on the teachers. Some police reportedly fired pistols at the demonstrators, though the governor claimed they were unarmed.

Police then moved to attack the headquarters of Local 22. There they destroyed the broadcasting equipment of the union’s radio station, Radio Plantón, and arrested several teacher leaders and activists.

Within a couple of hours the teachers had regrouped, armed themselves with clubs and pipes, and commandeered a number of buses. They then moved to retake the plaza.

The following day, June 15, the Oaxaca state government and Local 22 negotiated with the mediation of the Federal Secretary of the Interior (Gobernación). Ulises Ruiz now called for a “lessening of tensions” and the two sides negotiated an exchange of prisoners.

The state government released 10 teachers and suspended (but did not drop) criminal charges against 25.

In exchange, Local 22 released several police and intelligence officers. The state government agreed to pay for damages caused by the police, including the destruction of Radio Plantón, and to find more funds for teachers in Oaxaca. The Oaxaca authorities also called upon the federal government to “re-classify” the teachers, so that they would receive higher base salaries.

At this point the teachers began to demand the resignation or removal of Ruiz Ortiz and threatened to disrupt the national presidential elections scheduled for July 2. Neverthless, Ruiz Ortiz (a member of the Institutional Revolutionary Party, or PRI) remained in office and the teachers decided against disrupting Mexico’s national elections.

They did so both because disrupting elections would have angered many people and because many of the teachers wanted to vote, most likely for Andrés Manuel López Obrador of the Party of the Democratic Revolution (PRD).

Meanwhile the Oaxaca teachers received solidarity from many sources. First the teachers had the support of grassroots groups in Oaxaca, such as the People’s Assembly of Oaxaca (APP), the Committee for the Defense of the Rights of the People (CODDEP), and the radical Ricardo Flores Magón Indian and Peoples Council (CIPO-RFM).

Mexican teachers from throughout the country sent messages, emissaries, and material or moral support, as did some teachers’ organizations from other countries. The Education International, made up of teachers’ unions from around the world, called upon President Fox to find peaceful ways to deal with the teachers’ demands.

The City University of New York Professional Staff Congress (CUNY’s teaching staff union), CUNY students, and representatives of many left and community groups turned out July 7 for a protest at the Mexican Consulate in New York against the attacks on the Oaxaca strikers.

After 44 days on strike, Local 22’s state teachers’ assembly voted to end the strike in order to recuperate their finances and their spirits, though they promised to continue the struggle. As the teachers went back their co-workers, some 10,000 administrative workers, teaching assistants, and others, walked out on strike in Oaxaca. As Labor Notes goes to press the strike has ended, but the struggle continues.

Dan La Botz is the author of several books on Mexican labor unions and editor of Mexican Labor News and Analysis, an English-language report on Mexican unions and workers.

Related
Deep South Baristas Strike Starbucks »
Learning from the Covid Disruption: How Unions Can Emerge from the Pandemic More Effective »
‘You Have to Be Very Persistent’: Lessons from the Starbucks Union in Chile »
Workplace Bullying in Higher Education is Rampant. We’re Fighting Back »
Farm and Construction Equipment Workers Strike in Iowa and Wisconsin »