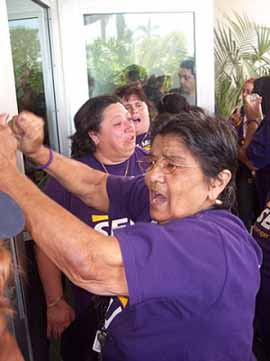 Workers show support for University of Miami students during their occupation of the school’s administration building. Photo: Diego Mendez.

After a 13-hour occupation at the University of Miami (UM) on March 28, 16 students and a campus chaplain emerged from the administrative building at 1:40 a.m. with a promise from UM President Donna Shalala to meet with the janitors attempting to unionize on the campus.

The March 28 occupation kicked off the fifth week of an unfair labor practice strike against UNICCO, a Boston-based contracting company hired by the University of Miami to provide landscaping and janitorial services.

Said Zoila Mursuli, who was fired and suspended for supporting the union, “They tried to make an example of me because I’m one of the active leaders.”

UM students, organized in Students Towards a New Democracy (STAND), and faculty have lobbied the UM Administration to pay janitors a living wage since an embarrassing report four years ago in the Chronicle of Higher Education listed the university as paying among the lowest wages in the country.

But their efforts, now joined by clergy of the South Florida Interfaith Committee for Worker Justice (SFICWJ) chapter, escalated tremendously last fall when UM janitors sought to join Service Employees (SEIU) Local 11. The UM campaign is part of a much broader effort by SEIU to organize janitors at Miami Beach condos and local universities.

When the strike began, the 400 UM workers were making less than $7 an hour and lacked health benefits. The university, on the other hand, recently announced that its endowment exceeded $1 billion.

Strike solidarity rapidly grew. Students flyered the campus and organized a march of 400. Many faculty refused to cross picket lines, teaching over 400 classes at alternative sites, including churches and synagogues.

Local clergy lobbied Shalala to allow the workers the right to organize, and Episcopal Campus Chaplain Father Frank Corbishley opened his church at the main entrance to campus to the striking workers as a “Strike Sanctuary” for workers’ daily meetings and meals.

In response to the pressure, Shalala announced in late March that she would provide funds to the contractor to raise workers’ wages 25 percent and provide health insurance.

Shalala, who was the Secretary of Health, Education, and Welfare and cabinet member in the Clinton administration, has consistently declared that she will “stay neutral.” But she opposes the workers’ demand that their union be recognized through card check, a method unions are increasingly turning to in response to employer harassment, intimidation, and firing of union supporters during NLRB elections.

The Miami media covered Shalala’s announcement of the wage increase as it meant the strike was over, so the March 28th occupation was intended in part as a wake-up call to the Miami community. Hours before the occupation, the UNNICO workers, flanked by faculty, students, clergy, and community supporters, blocked a major six-lane highway outside the gates of UM, shutting down traffic for miles.

After the arrests were made, STAND student Alana Lopez grabbed a bullhorn to tell the crowd that students had just successfully taken over the Admissions Office in UM’s Ashe building. Hundreds rushed to the Ashe building and before police could secure it, another 50 workers, faculty, students, and members of the media made it into the lobby, separated from the occupiers only by a glass wall.

The occupiers announced they would not leave the building until Shalala called for a meeting of SEIU, UNICCO, and UM and announced that UM would not tolerate intimidation or coercion of workers attempting to form a union. However, two subsequent meetings, which Shalala did not attend, have not produced card check recognition of the union.

As a result of the university’s continuing refusal to agree to card check, ten workers began a hunger strike on April 5. After a week, six students joined the hunger strikers.

They live in a shanty town called “Freedom Village” outside of UM’s main gate and under Miami’s loud Metro Rail. A nurse is present around the clock as they rest on their cots and sleep in tents at night.

Feliciano Hernandez, a UNNICO who was suspended for refusing to carry heavy machinery up a flight of stairs, began the hunger strike because “they are treating us like dogs. We can’t allow that to continue.” Hernandez has since been rushed to the hospital and had to end his hunger strike, as have four other workers and one student. During the week of April 17, community and religious supporters joined the hunger strike, some living at Freedom Village for the duration.