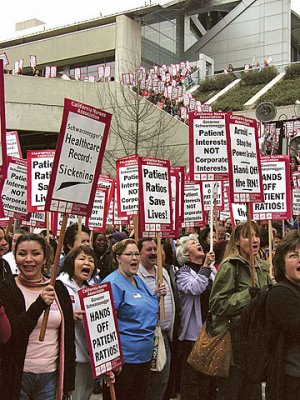 When George Bush was re-elected in November 2004 Arnold Schwarzenegger celebrated Hollywood style, with an extreme political makeover. With his poll numbers in the clouds and state Democrats in no mood to fight, Arnold veered to the right, implementing a pro-corporate agenda and taking aim at the state's unions, who he blamed for everything from political gridlock in Sacramento to the state's budget deficit.

But after 12 months of going toe to toe with the state's nurses, teachers, and firefighters, Schwarzenegger's approval rating was cut in half and his ballot initiatives were roundly rejected by voters. Indeed, after declaring 2005 the "year of reform," the former Mr. Universe limped into 2006 with his superhero image battered, if not completely wrecked.

Schwarzenegger's first step was to reward corporate backers in the health care industry by suspending a hard-won law that lowered patient-to-nurse ratios in the state's hospitals and emergency rooms.

This move ignited the California Nurses Association (CNA), who defied conventional wisdom in both labor and Democratic Party political circles and aggressively fought back against the governor. Within weeks thousands of nurses staged a large demonstration in Sacramento to defend the safe staffing ratios, and rank-and-file CNA activists began hounding Schwarzenegger at public appearances.

The standoff escalated in December 2004 when Schwarzenegger ridiculed a group of protesting nurses during a women's conference. He told the 10,000 audience members to ignore the chanting RN's, claiming they were "special interests" who were upset because "I am always kicking their butt."

The remarks set off a media firestorm, pitting Schwarzenegger against the mostly female nurses. And the nurses never flinched.

As Tam Nguyen, a nurse at the UC-Irvine Medical Center, observed, "We were the first group willing to speak out against the governor. We went out in the street and showed leadership. As a result, we got a response from the public, as well as other unions like the teachers and the firefighters."

Schwarzenegger only helped the nurses' cause, antagonizing the state's firefighters and other public employees with a one-two punch. In January 2005 he proposed to privatize the state's pension system, a move that would have also eliminated survivor benefits for police and firefighters killed on the job.

A month later Schwarzenegger galvanized teachers by walking away from his oft-repeated promise to restore more than $2 billion to the education budget.

PRESSURE IN THE STREETS

In March several of the state's largest unions banded together to form the Alliance for a Better California. Nurses now had company in the streets as cops, teachers, and firefighters joined their near daily protests. At one Schwarzenegger fundraiser in San Francisco, protesters surrounded the Four Seasons hotel, blocking traffic for half an hour.

"It was fantastic," said Linda Ray, a public health nurse in SEIU Local 790. "When they saw our ring around the hotel, these guests in their high heels and mink coats just turned and went the other way. Schwarzenegger himself had to sneak into the hotel three hours early just to get in."

The unions also organized massive protests in Los Angeles and Sacramento-drawing tens of thousands of activists into the streets.

This full-court press in the streets and in the media forced Schwarzenegger to abandon his attacks on the pension system. Meanwhile, a superior court sided with the CNA and restored the safe staffing ratios.

But rather than retreat, the governor upped the ante, calling for a special election in November and personally working to put four propositions on the ballot, including two that were explicitly anti-union.

The first measure extended the probationary period for teachers from two years to five, which would make it easier to fire teachers for any reason (or no reason at all). The second required public employee unions to get annual written permission before using any member's dues for political purposes.

California's unions responded by pooling an unprecedented amount of money, spending over $100 million to defeat the four propositions. The California Teachers Association provided the lion's share, more than $53 million, while SEIU put in more than $20 million between its umbrella California State Council of Service Employees and the large state workers Local 1000.

As the election approached, the Alliance worked with local labor councils and the state fed to coordinate precinct walking and phonebanking, with more than 10,000 people working on voter turnout statewide.

But it was the nurses' performance that really stole the show. Wherever Arnold went, from Washington to Wall Street, the nurses weren't far behind. The CNA even followed Schwarzenegger to a $100,000-per-ticket fundraiser at the Rolling Stones concert in Boston's Fenway Park.

"People recognized us right away, and they even know about the ratio issue," said Nguyen, who followed Arnold to Boston to protest outside of the concert. "They knew exactly why we were shadowing our governor."

The nurses never let up, staging more than 100 protests in 12 months. These efforts struck a chord both with union members and with the public. At the November 8 election, all four of Schwarzenegger's were defeated.

"The best thing Arnold ever did was to bring us all together," said San Jose Teachers Association President Marlene Mattoon on election night. Indeed, the specter of the special election was so serious that it overcame some of the tensions from last summer's AFL-CIO split.

Through the Alliance for a Better California, the state AFL-CIO partnered with its erstwhile opponents in SEIU.

"On the ground and especially in the local labor councils, we were united to beat Schwarzenegger," said Craig Merrilees, director of AFSCME Local 3299. "We didn't let what was happening at the top of the labor movement jeopardize that."

This unity may be challenged, as Schwarzenegger (who's up for reelection) appears to be courting union support with proposals for minimum-wage hikes and increased state spending.

This election year largesse may be enough to dissuade some unions from waging another head-on confrontation with the Governator.

Others, particularly the nurses, are already preparing for battle. Their sights are set on more ambitious reforms such as public financing of elections and universal single-payer health care.