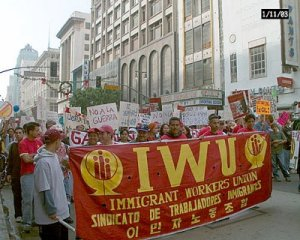 The Immigrant Workers Union began nearly two years ago when 10 workers from Assi Super, Koreatown’s largest Korean supermarket, staged a walkout to protest a cut in their work hours and came to KIWA for help.

Over its eleven-year history, Korean Immigrant Workers Advocates has grown from a service and advocacy organization to being a key component of a union organizing campaign at a major Los Angeles market. KIWA’s story illustrates the difficulties and potential for cross-cultural immigrant organizing in the U.S. workplace.

KIWA was founded in 1992 by two Korean American activists who wanted to help low-wage workers in the Koreatown area of Los Angeles gain a voice. Until then, the predominant voices coming out of Koreatown were those of small business owners and professionals.

KIWA has engaged in many campaigns to bring the struggles of the working people of Koreatown to light and to build community support. However, KIWA could not be called a “workers center” until we began the Restaurant Workers Justice Campaign in 1996 and KIWA shifted from being a service and advocacy organization to one that did direct-action worker and community organizing.

Koreatown has over 300 restaurants, employing over 2,000 workers, half of whom are Korean and half of whom are Latino. In 1996, when we started the campaign, 97% of the restaurants were non-compliant with California labor standards on wages, overtime, and health and safety.

KIWA identified key restaurants around which we could build individual boycott campaigns. We used those boycotts to educate both workers and the community about the problems.

KIWA faced strong opposition from the Korean Restaurant Owners Association, which attempted to counter-organize the community against KIWA and the workers. But in 1998 KIWA helped form the Restaurant Workers Association of Koreatown, a membership organization that has over 300 members and continues to grow.

One of KIWA’s biggest challenges has been building solidarity between Korean and Latino workers. Korean employers commonly try to split the workers along racial lines and appeal to a Korean worker’s sense of ethnic solidarity.

One of KIWA’s biggest challenges has been building solidarity between Korean and Latino workers. Korean employers commonly try to split the workers along racial lines and appeal to a Korean worker’s sense of ethnic solidarity.

KIWA has provided a space for workers to come together and the tools to overcome the language barrier so that the workers can share their experiences. They then can discover that Korean and Latino workers have much more in common with each other than the Korean workers have in common with their Korean employers.

With the most recent Market Workers Justice Campaign, KIWA saw the opportunity to do more than a minimum-wage campaign. Korean supermarkets are not mom-and-pop stores with a handful of workers, but large companies with nearly the same revenues as mainstream supermarkets.

Given the close to 1,000 Korean and Latino workers that these supermarkets employ, KIWA felt that the most effective route to industry-wide change was union contracts.

Due to the lack of a strong union presence in Koreatown, KIWA began laying the groundwork for an independent union, the Immigrant Workers Union.

KIWA launched the Market Campaign in November 2001 when ten workers from Assi Super, Koreatown’s largest Korean supermarket, staged a walk-out to protest their work hours being cut. They came to the KIWA office for help and became the beginnings of the union.

Assi management responded by trying to convince Korean workers that they had an obligation to side with their Korean employer and that the union would only benefit the Latino workers.

Many of the Korean workers are reluctant to support the union publicly. Despite KIWA’s efforts in the community, many workers are attacked and criticized when they speak out, for “bringing shame” to the community. Management made a point of harassing those Korean workers who did come out publicly, assigning them harder tasks and isolating them in their work so that they could not receive peer support.

One such Korean worker became very depressed, until one day, while he was re-stocking shelves, a Latino worker came by and patted him on the shoulder saying, “Him ne-yo,” which is Korean for “Stay strong.” This Korean worker was moved to tears, and he continues to speak out and encourage other Korean workers to join him publicly.

In August 2002, Assi market suspended more than 50 workers. The company said it had received “no match” letters from the Social Security Administration alleging that these workers’ names and social security numbers did not match. The majority were Latino and pro-union.

In response to the suspensions, the Immigrant Workers Union and the community launched a boycott of Assi market on that same day. Since then, the workers continue to picket the market, first daily and now weekly, demanding reinstatement of all the workers. They are also demanding redress for years of break-time and overtime violations and discrimination.

The boycott of Assi market is not just about justice for the displaced immigrant workers. It is also about holding our own immigrant community accountable. Assi itself is a company founded and run by immigrants.

Other store owners and workers have closely followed the developments at Assi. Working conditions at other markets-poverty wages, no job protection, poor benefits-add to the continued necessity for other market workers to organize.

Cindy Cho is an organizer with Korean Immigrant Workers Advocates.