How Can States Raise Revenue? Hint: Not from Us. 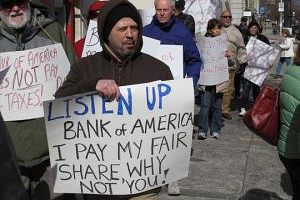 The traditional union approach to budget politics is to accept the limits of what’s possible—typically defined by politicians and lobbyists—and push for the best deal we can within those fiscal constraints.

Labor leans heavily on its inside game, and builds outside pressure in the form of anti-cuts coalitions that highlight the vital services public employees provide, and the harm that cuts will cause to the poor and vulnerable.

Raising taxes is painted as the political kiss of death, so politicians—and most unions—aim low. They avoid engaging with the deeper question of what a fair economy would look like and what role budgets play in getting us there.

That approach is a disaster these days. With no hope that the federal government will plug the states’ $112 billion budget hole this year, the “politically realistic” options are all bad.

Some unions are looking beyond “stop the cuts.” They’re proposing how governments can go where the cash is to raise money for services.

In the best cases, they’re planning more than one step ahead. They’re looking years down the line, to a point where winning budget fights isn’t about what we can live with but what we deserve.

“What’s a piddly two-tenths of a percent increase for the people at the top?” asked Carol Lambiase, a United Electrical Workers representative. “They just got a huge windfall from the Bush tax cut extension.”

Through Better Choices Connecticut, a coalition of dozens of community groups, advocacy organizations, and unions, heavily backed by the Service Employees, the teachers, and the state employee bargaining coalition, activists are pressing to close corporate loopholes and business tax exemptions; lower the estate tax threshold to $2 million; and hike taxes by 2 percent on residents making more than $500,000.

Their proposal would reduce or leave taxes unchanged for 85 percent of the state’s residents, and bump taxes significantly only for the very wealthy.

Unions and community allies are taking their message to town hall meetings and targeting tax dodgers like Bank of America, which paid no federal taxes last year. (The company is hardly the only tax scofflaw, of course).

SEIU, which represents many state employees, staged actions against Bank of America in five towns March 12, part of a national effort (the "Fight for a Fair Economy") that one local officer likened to a “Tea Party of the left.”

TURN UP THE HEAT

In Chicago, reformers elected last year to head the Chicago Teachers Union are pressing to reshape the city’s spending priorities. Their target is Chicago’s "tax increment financing" (TIF) program, which the union says drains $250 million yearly from schools and doles out cash to politically connected developers and big banks.

The money was supposed to encourage development in blighted areas but instead subsidized luxury housing and big-box retail stores.

“There are over 100 schools that don’t have stand-alone libraries because Chicago’s elected officials are spending millions on political patronage and calling it economic development,” said Jesse Sharkey, CTU vice president.

On March 19 the union kicked off its campaign to steer TIF money into schools, with a rambunctious group of teachers, parents, and community members taking over the showroom floor of one of the largest TIF recipients, a Chrysler dealership in Chicago's tony Gold Coast.

A CTU staffer and a community activist were arrested in the action, which began at a Bank of America branch, highlighting the TIF program’s Wall Street connections.

Community activists in New York are also putting politicians on the hot seat. Seventeen activists from Community Voices Heard, a grassroots community organization of low-income residents, were arrested March 2 in a sit-down inside the state Capitol, after pressing pols to raise revenue by taxing Wall Street and the wealthy instead of pushing through more cuts.

CVH leader Agnes Rivera noted that because of the state's heavy reliance on sales tax, poor people in New York pay 11 percent of their income in taxes, while the rich only pay 4 percent.

“Does the governor think we’re so dumb that we don’t realize they’re not paying an equal part?” Rivera asked. “They need to tax the rich!”

Bank of America paid no taxes because they still have a boatload of losses they can carry forward to offset their income you blithering idiot. It's the same carry forward provision than any company, large or small can use. There is no tax dodging unless you consider using the very tax code to your advantage. Do you not take every deduction and credit available to you? I bet you've even taken some that you weren't entitled to. Don't be a hypocritical puritan. B of A paid billions in tax in 2007. The ONLY reason they are paying zero taxes now is due to financial crisis related losses which they are rightly entitled to deduct against income.

Get your facts straight.

So how did B of A got those "boatload of losses" to offset their income? By making a boatload of money through irresponsible "ninja" loans and then selling off these risky mortgages to other financial institutions who bundles these low grade loans and magically turns them into A rated investments to sell to the working people pension funds. All of the financial institution got into this scam which collapsed the market and is a major contributor to the present "depression".

We the people did not get a multi-billion dollars bailout when we made bad investments and go bankrupt. We just simply get toss out of our home.
And another thing genius, don't compare a billion dollars corporation to a poor working person. It just reinforces the stupidity of your argument.

I bet your one of those teabaggers that watches Fox "News" and blames teachers and state workers for the poor economy.

Get your head straight.

So these companies are just carrying forward their losses? You apparently have forgotten the Arthur Andersen “creative accounting” scandal of several years back, though this is hardly the only example of sophisticated tax evasion.
The NY Times reports today that for 2010, General Electric, the nation’s largest corporation, reported worldwide profits of $14.2 billion, including $5.1 billion from its US operations. However, not only did GE not pay any US taxes, the company claimed a $3.2 billion tax credit!
According to the article: GE's “fierce lobbying for tax breaks and innovative accounting” ...enabled it to concentrate its profits offshore.” Sounds like “money talks” rather than “a boatload of losses” to me.