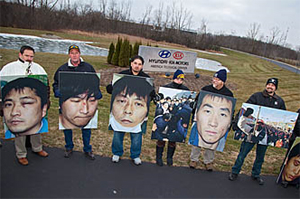 A version of this article appeared in Labor Notes #383, February 2011. Don't miss an issue, subscribe today.
Related
'We'll Never Be in This Position Again': Striking Deere Workers Hold Out for Better Deal »
Academic Workers Join Push for One Member, One Vote in the UAW »
Steward's Corner: How to Think Like an Organizer »
'Let's Put a Wrench in Things Now': Deere Workers Strike as Company Rakes in Record Profits »
Countdown to a Strike Tonight at John Deere »