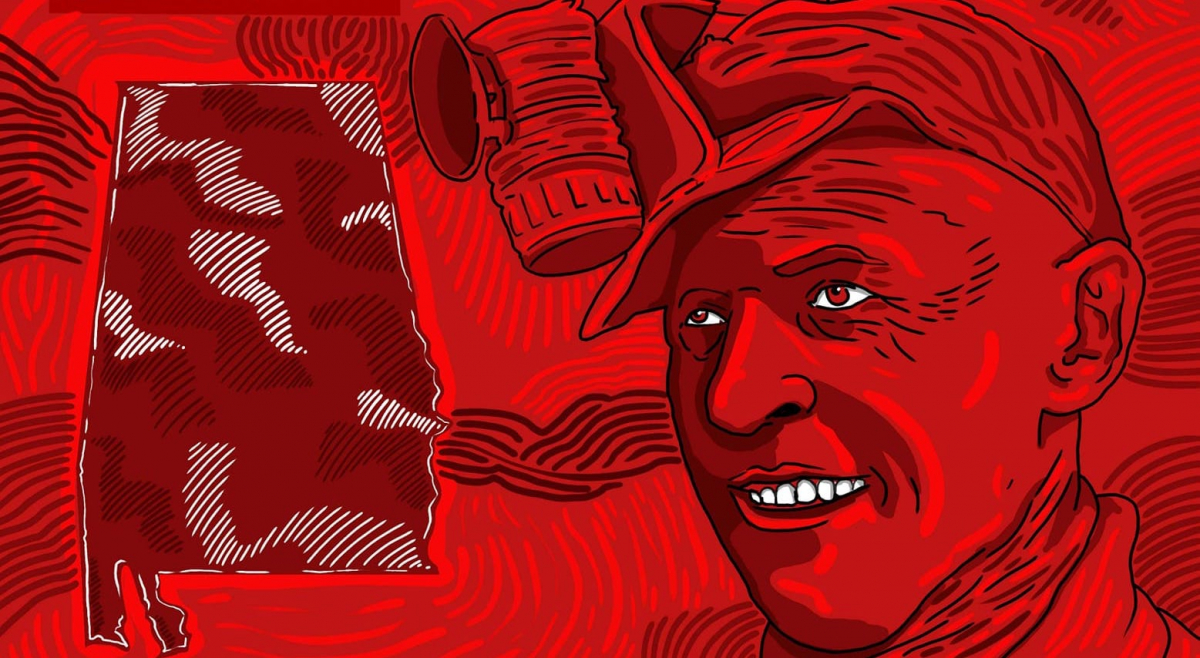 Eleven hundred miners have been on strike at Alabama's Warrior Met Coal since April 1, fighting to get back some of what they gave up following a bankruptcy in 2015. But conservative pundits—always eager to portray themselves as mineworkers' advocates—have been silent. Graphic: Charles Hastings. Follow him @solomonk256 on Twitter and @churchofself on Instagram.

A supposed defense of coal miners, their families, their way of life, and their culture has been front and center of the Republican agenda ever since the push for decarbonization began. It was a key part of the Right’s pushback against Obama and his “war on coal.” Hillary Clinton faced tremendous pushback for her awful statement on the 2016 campaign trail that she was going to “put a lot of coal miners out of business.” In contrast, Trump said, “we’re going to put these coal miners back to work,” even bizarrely donning a hard hat in coal country at one point.

Many in the labor movement have long argued that this faux-populist rhetoric was empty. Of course this advocacy ostensibly on behalf of coal miners was really only ever meant to help coal bosses.

The last seven weeks confirms it: Republicans’ rhetoric is all a ruse. Why? Because since April 1, 1,100 coal miners at Warrior Met coal mine have been on strike, fighting to push the company to come to the table and negotiate a fair contract.

These miners have sacrificed for the company to bring it into solvency following a bankruptcy in 2015, when they accepted a contract with major concessions including a $6 an hour pay cut, frequent seven-day workweeks, a loss of their guaranteed paid lunch break, and overtime compensation. They did their part, and now the company is solvent.

In fact, two of the last five years saw record-breaking coal production, and the company’s CEO now has a record-breaking annual compensation of $4 million. But Warrior Met Coal did not hold up their end of the bargain.

First, they negotiated in such bad faith without any concrete proposals that workers were forced to go on an unfair labor practices strike. This forced the company to the table, but with an offer that workers found insulting, offering only a $1.50 an hour raise over five years.

An overwhelming majority of the miners voted against this offer, opting to continue the strike.

To add insult to injury, the company filed a complaint against the workers in an attempt to suppress their speech by limiting their ability to picket. The courts, as they have so often throughout American labor history, gladly cooperated, first limiting picket lines to six people per entrance, and then allowing the union a whole 10 people per entrance. All the while, the miners have faced intimidation from the cops, who falsely tell them they are not allowed to walk on their picket lines. Meanwhile, the company buses in scabs to undercut them.

As all this has unfolded, I was waiting for someone on the Right to speak out in support of these workers. This, at least in appearance, has all the trappings of a story that conservatives can rally around. You’ve got coal miners, in Alabama, many of whom are conservatives (I saw more than one MAGA hat while walking the picket lines with them), fighting for themselves, their families, and their communities. They’re demanding fair compensation against elites (Republicans hate elites now, right?), and the government is coming in and suppressing their freedom of speech, freedom of assembly, and freedom to protest. What’s missing for a good conservative culture war story?

Well, it isn’t what’s not there. It’s what is there. This coal miners’ strike has something that stories about the Great Cancellation of Dr. Seuss don’t: working-class solidarity wielded against bosses.

If the same right-wing talking heads who spent hours wailing about Mr. Potato Head a few weeks ago decided to rally around the strikers, many in the conservative rank and file would join them. But those conservative talking heads never will, because it threatens their class interests and the bosses they carry water for. Because if coal miners who are conservative and liberal, Black and white, in a deep-red state like Alabama can walk off the job to demand better pay and working conditions, then maybe the average Fox News watcher could, too. And we can’t have them thinking like that.

Jacob Morrison is secretary-treasurer of the North Alabama Area Labor Council and cohost of The Valley Labor Report, which is hosting a benefit concert for the striking mine workers this weekend. You can donate or buy a link to watch it here.

A version of this article was originally published at Jacobin.