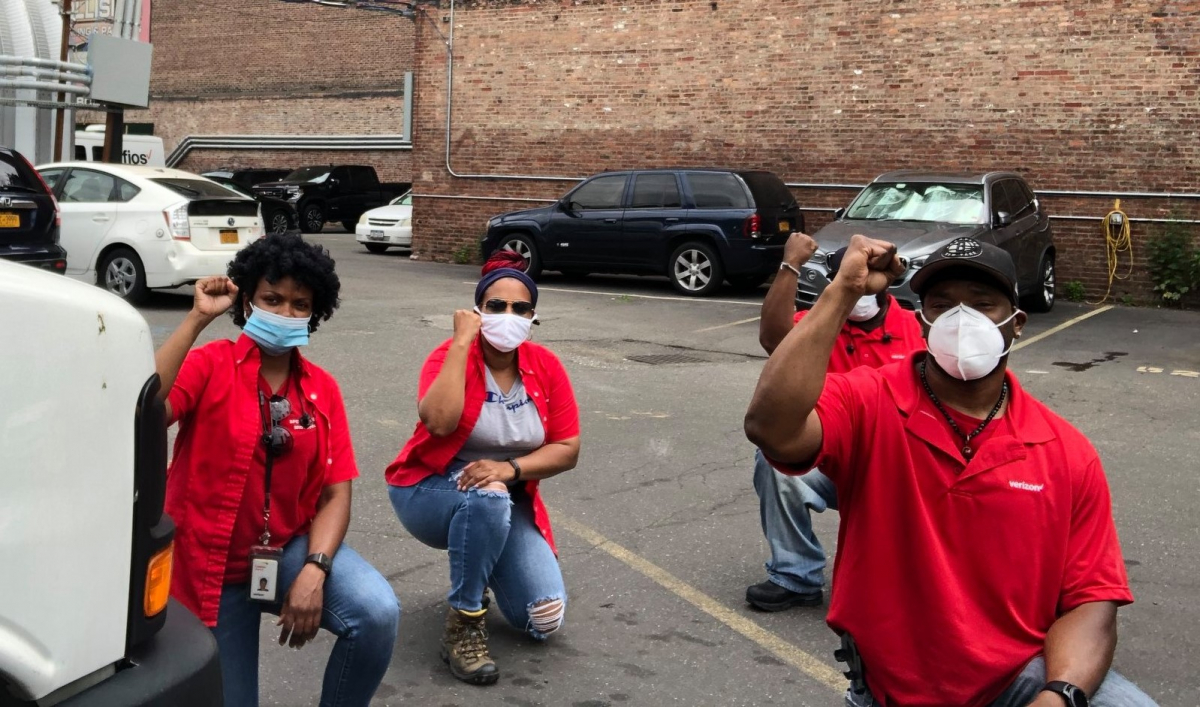 Both the Longshore Workers and the Communications Workers called 8-minute-46-second actions to mark the amount of time George Floyd was held under Derek Chauvin’s knee. CWA suggested members gather and hold signs, pull their trucks over, stand up, take a knee, use their lunch breaks to picket, or participate through social media. Photo: CWA District 1

The Black Lives Matter uprising has prompted strong statements about racism and police accountability from top union officials, but the participation of the labor movement has been limited. Several internationals have, to their credit, encouraged their members.

More of the initiative to take action has come from below, with local unions and rank and filers organizing or participating in local demonstrations, pushing local governments and schools to shift resources from policing to community needs, and confronting racism in their own workplaces and industries.

Here is a round-up of some of labor’s responses to the growing Black Lives Matter movement.

In Detroit, 40 members of the Electrical Workers (IBEW) joined a daily march on June 3, the only visible union contingent in the city to that point. The group was sparked by a text from an apprentice, Kayla Pauli, and joined by local officers. Marchers from the majority-white local made signs that quoted the IBEW constitution on “human justice, human rights” and “we refuse to condone or tolerate dictatorship or oppression of any kind.”

The IBEW International president chimed in on the group’s live Facebook feed and thanked members for being there. Next step is to create a group for all Detroit building trades.

Similarly, rank-and-file Detroit teachers called their own rally after English teacher Torie Anderson made a simple post on a Facebook page. “I thought it would be powerful to have 10 teachers there,” Anderson said. Two days later 250 educators and supporters from public and charter schools and surrounding suburbs showed up at police headquarters, wearing red.

Not to be outdone, the Detroit school district—i.e., management—announced it would hold its own march, which happened four days later.

In Minneapolis, Centro de Trabajadores Unidos en la Lucha (CTUL, Center for Workers United in Struggle), a worker center just a block from the murder site, has been providing masks and water to protesters and at the height of the uprising evacuated residents from fire-stricken homes.

Bus drivers in Minneapolis, New York, and Washington, D.C. refused to transport arrested protesters or police on city buses. Amalgamated Transit Union President John Costa backed them up, citing “the right to refuse dangerous duty” and “a misuse of public transit.” (Read more from the president of the Black caucus in the Minneapolis transit union here.)

Teacher unions have called for police to be removed from schools, winning tangible victories. In Minneapolis the union successfully pushed a proposal at the school board to eliminate a $1.1 million contract with the police.

The Movement of Rank-and-file Educators (MORE) caucus in the New York City teachers union organized a 1,000-person march of teachers, parents, and students for police-free schools. MORE says the 5,500 “school safety agents” employed by the police department to work in schools (more than counselors and social workers combined) should be brought back into the Department of Education as they were earlier.

Both the Longshore Workers (read more here) and the Communications Workers called 8-minute-46-second actions to mark the amount of time George Floyd was held under Derek Chauvin’s knee.

CWA suggested members gather and hold signs, pull their trucks over, stand up, take a knee, use their lunch breaks to picket, or participate through social media.

The backstory of our Union is long. There are parts of our Brotherhood’s history that aren’t mentioned much because they were—quite frankly—racist.

There were times where our Union officers and members disallowed black railroad employees membership. There were fights with railroads to not hire black men, so that we could avoid the issue altogether.

When those were unsuccessful, there were policies that did not afford black members the ability to be foreman or earn higher rates of pay than white counterparts. This hatefulness went on for decades. Several decades. Damn near a century, to be honest.

There were men among our ranks that shouted against this ugliness at the time. But not enough. It takes courage to speak truth within an institution; to stand up and call out wrongfulness when many of your colleagues condone it. So, without honest criticism, the problem festers.

The officers in Minneapolis were part of that rot. So were the ones in Georgia who refused to arrest the killers of Ahmaud Arbery because one was retired law enforcement himself.

Another part of rail labor history that intertwines here are the railroad strikes of 1877. In response to the Baltimore and Ohio Railroad cutting wages to the bone, railroaders in Baltimore, New York, Pittsburgh, Philadelphia, Chicago, St. Louis, and other smaller U.S. cities rioted. They struck the railroad—burning depots, tracks, trains and other buildings to the ground.

In some cases, the National Guard troops summoned by President Rutherford B. Hayes turned on him, siding with the striking rail workers and aiding in the destruction.

Those actions—controversial and deadly—paved the way for labor protections that we take for granted today.

Now, labor strife—as well as the fight for civil rights—can be a precarious line to walk, and it remains most people’s desire to avoid mass destruction and rioting. But the events of this weekend are not without provocation. You can only ask people to wait for justice and fairness and equity but for so long.

Three hundred workers at the New York Times staged a sickout after the newspaper ran an op-ed calling for an “overwhelming show of force” against protesters. Editorial workers raised a storm on Twitter despite company policy against taking sides on issues publicly. To tie the protest to workplace rights, many tweeters said the op-ed “puts Black @NYTimes staff in danger.” The publisher apologized to staff at a virtual town hall; the editorial page editor was forced to resign.

Forty-three journalists of color at the Philadelphia Inquirer staged a sickout after the paper ran the headline “Buildings Matter Too”; the executive editor resigned. At both papers, discussion morphed from the original insult to ongoing internal discrimination.

The NewsGuild organized to defend a Black Pittsburgh Post-Gazette journalist after management banned her from covering the protests due to an alleged conflict of interest. The NewsGuild has also joined a class action lawsuit brought by the ACLU on behalf of journalists assaulted by Minneapolis police during protests.

The Minnesota AFL-CIO called for the Minneapolis police union president to resign (for more from Minneapolis, see this story). Unions debated whether police unions belong inside the house of labor. Rank-and-file Service Employees members petitioned their union to drop police officers as members. The Seattle-area King County Labor Council demanded that its member police union address racism within its ranks or be expelled; on Wednesday, delegates followed through and kicked the cops out of the labor federation (see this story).

In Oakland, California, a coalition of unions representing over 100,000 workers throughout the state rallied outside the office of the Police Officers’ Association to demand that the Oakland Police Department budget be cut in half, with the money redirected toward community needs. “I have firsthand experience of what over-policing means for the Black community,” said Oakland security officer Ben May. “We need to move the police budget into things that my community actually needs.”

Read more: It's Time to Make Black Lives Matter in Our Unions

Saurav Sarkar is an Assistant Editor of Labor Notes.saurav@labornotes.org
Related
Chicago Passes Union-Backed Bill for Civilian Oversight of Violent Cops »
Review: White Workers Who Buy into Racism Are Shooting Themselves (and Everyone Else) in the Foot »
Defying Police Violence, Strikers across Colombia Are Demanding Transformational Change »
'We Took Care of Each Other': A Maritime Union's Hidden History of Gay-Straight and Interracial Solidarity »
Duke University Press Workers Organize with NewsGuild »