Before It All Melts Away 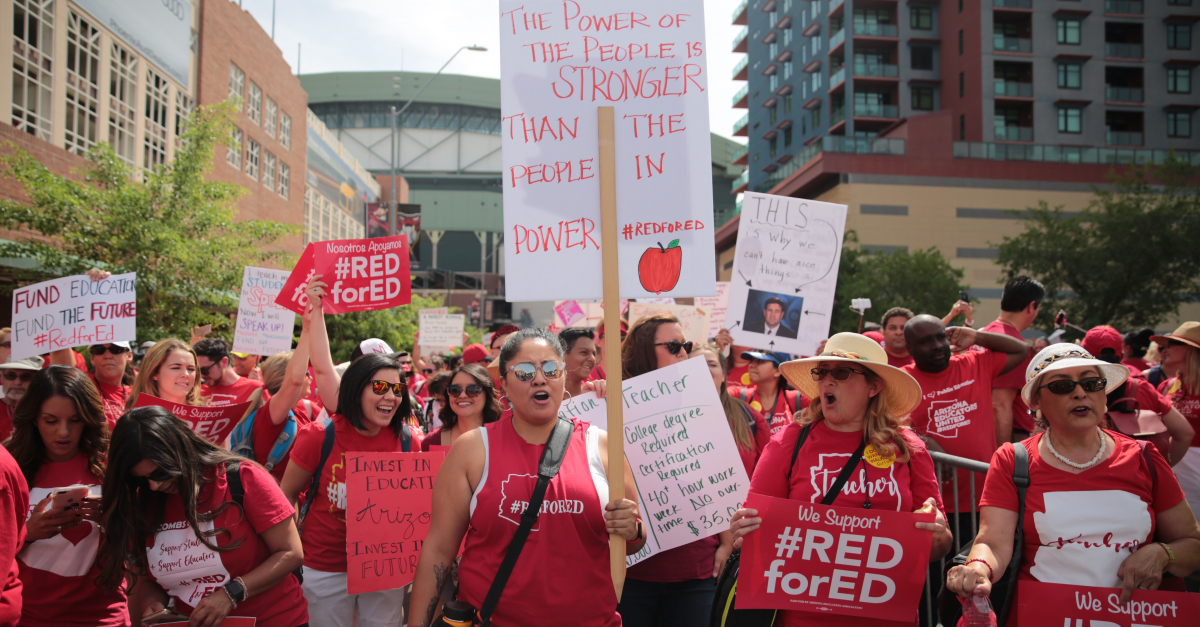 Will this spring’s wave of teacher strikes lead to stronger unions? Not if they return to business-as-usual unionism. Photo: Gage Skidmore for Arizona Education Association, CC BY 2.0.

Will this spring’s wave of teacher strikes lead to stronger unions? Not if their unions return to business as usual.

The motor force behind the strikes in West Virginia, Oklahoma, Kentucky, Arizona, Colorado, and North Carolina is teachers’ deep frustration. Educators are feeling the pinch from decades of funding cuts that their unions have been unable to stop.

Many state associations are run by their staffs. Rarely do they engage in meaningful fights at the school or district level. Annual lobby days mobilize a tiny fraction of members. Teachers and school support staff feel only loosely connected to the union.

So it’s no wonder that much of the strike organizing has taken place outside official union structures, often through informal groups on Facebook.

The strikes temporarily gave the unions lobbying leverage. But it wasn’t enough.

That’s why teachers in West Virginia are still mobilizing to fix the state’s public health insurance system, rather than just leaving it up to union officials, and Arizona teachers are hitting the streets to collect 150,000 signatures for a ballot initiative to fund education by taxing the rich.

Winning these righteous fights will require lobbying and electing sympathetic politicians. But those tactics won’t be enough to shift the balance of power between teachers and the corporations that own their state governments.

Look what happened in Wisconsin after the 2011 uprising. When institutionally weak unions face off against well-funded Republican candidates, the results aren’t pretty.

Mass mobilization is what gave teachers a dose of power this spring. But once everyone goes home, that power melts away. To gain ground they will have to show they can do it again, and again. Unions will need to establish a more consistent presence in the schools and community.

To build a muscle, you have to use it. To organize better, organize more. Unions would be smart to put some energy into a different kind of fight: pushing local school districts to engage in collective bargaining.

Can they do that? You bet. You’d hardly know it, but collective bargaining is legally permitted for teachers in many of these states.

Those issues are teachers’ bread and butter. Yet not one school district in West Virginia has a union contract. In Oklahoma and Kentucky, only a handful do.

Louisville is one of the outliers. “We bargain planning time, prep, and all kinds of conditions that make teaching in the classroom manageable,” says Tammy Berlin, vice president of the Jefferson County Education Association. And in a right-to-work state, her local maintains an impressive 93 percent membership rate.

A contract campaign is a great union workout. You get to identify, recruit, and develop rank-and-file leaders. You get to test your strength by mobilizing growing numbers in collective action. You get to deepen alliances with parents and students.

If 100 teacher locals did that this year, imagine how much further they’d be prepared to go in their next statewide uprising.

Chris Brooks is a staff writer and organizer with Labor Notes.chris@labornotes.org
Related
Teachers Strike against a ‘Heartless’ School Board in Biden’s Hometown »
How We Turned Bargaining Around at Law360 »
Virginia Public Sector Workers Are Organizing to Make Their New Bargaining Rights a Reality »
Steward's Corner: Drafting Good Contract Language »
Cleveland Heights Teachers Strike in the Snow, Beating Austerity with Solidarity »

The points Brooks makes about the need to build organization and have “a more consistent presence” go to the heart of the matter.
Brooks’ advice that “unions would be smart” to push school districts to engage in collective bargaining is excellent. But, as Brooks himself points out, “many teacher unions operate in a legalistic fashion, selling services . . . ” Union staff and electeds are unlikely change their m.o. just because it would be smart to. The rank and file will have to step up in order for this to happen. Joe Burns wrote recently, “Entering the 1960s, most public sector unions were conservative, weak, ineffectual . . . Rank and file workers rebelled against this framework . . . They replaced hidebound leaders, or formed new unions.” In most cases, this will be how it must happen again.
Brooks urges that there be contract campaigns, pointing out that collective bargaining is “legally permitted for teachers in many of these states.” However, “permitting” collective bargaining is not much support for it. Collective bargaining was “permitted” in the United States before the National Labor Relations Act in 1935, but it was still extremely difficult to get an employer to negotiate. The NLRA, itself a response to general strikes that shut down entire large cities, made it mandatory for employers to bargain with a recognized union (and it still took the giant sit downs to force de facto recognition). In the public sector, states like New York also compel bargaining.
As in the 1930s for private sector workers and in the 1960s for public sector workers, the time to demand and win greater legal and de facto union rights is at the full tide of mass action. By “union rights” is meant things like the employer must bargain, mechanism to enforce that requirement, a wide scope of subjects that must be bargained, the right to strike, etc. This has not happened so far during this strike wave.
We have to acknowledge that while rank and file teachers fought with so much courage and solidarity for a living wage for themselves and other school workers, for decent benefits, for school funding and progressive revenue sources for all these, they did not ask for greater union rights. This movement put the quality of education front and center. Demands for union rights might have attracted less support from the public and perhaps even from teachers themselves. Interestingly, the New York Times on June 1 reported polls showing overwhelming support in these red states for raising teacher pay and school funding. Respondents were split, however, on whether or not unions were “part of the problem,” with 34% agreeing and the same proportion disagreeing.
Some in labor circles have urged teachers and other public employees to “bargain for the common good,” and some teacher unions have adopted this as a watchword. This discussion has usually been about, and by, urban unions in “blue” states. This spring’s strikers seem to have done this as a natural course, to huge success. However, an unplanned consequence is that an opportunity to win greater union rights - which could have helped unions “establish a more consistent presence in the schools and the community -” may have been missed. It will be up to the most militant, union-conscious sections of the rank and file whether they want to, and will fight to, put that on the agenda for future action.