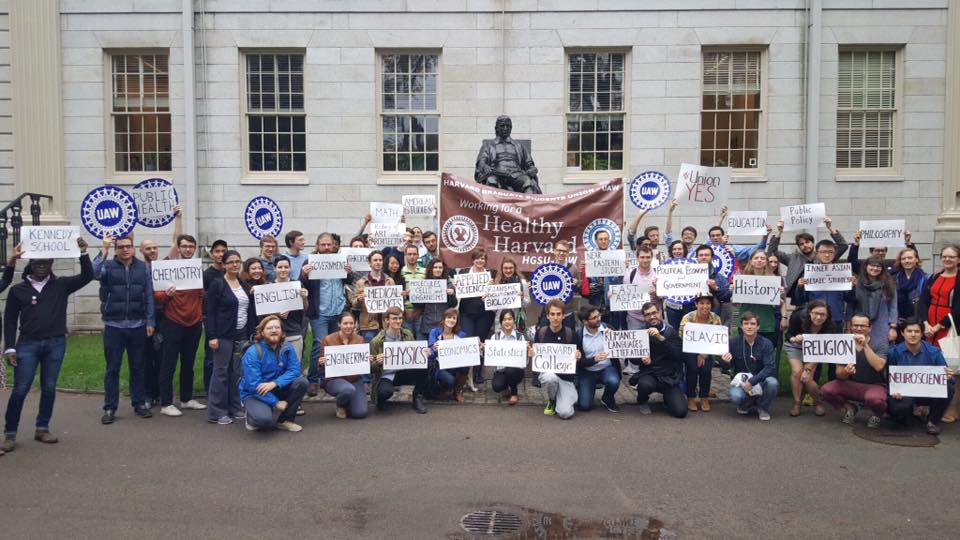 Harvard is asking the NLRB to change how union elections are run, as part of its ongoing fight against graduate student unionization. Photo: Harvard Graduate Students Union-UAW

The richest university in the world, with an endowment of $36 billion, is asking the National Labor Relations Board to change how union elections are run. Harvard University sees itself in the vanguard of resistance to the Trump administration. So why is the university now courting the support of Trump's appointees by challenging an obscure—but far-reaching—labor relations rule? In order to prevent a fair vote by its graduate student workforce on whether to unionize.

Last fall Harvard graduate research and teaching assistants voted in an election to decide whether to pursue collective bargaining via a union local affiliated with the United Auto Workers, which represents 65,000 academic workers on campuses including New York University, the vast University of California system, and the University of Connecticut.

But the Harvard Graduate Students Union-UAW argued that the election was tarnished because the Harvard administration had failed to supply a complete and accurate list of workers eligible to vote, as it is bound to do by law.

This summer, the NLRB regional director agreed with the union and ordered a new vote.

Harvard is appealing to the full Board not by arguing against this fact; rather, as the regional director starkly explains, “In essence, the Employer seeks to change established Board law.”

Such a rule change would spell disaster for workplace democracy. In its landmark Excelsior decision in 1966, the NLRB held that “the access of all employees to such communications [concerning union representation] can be insured only if all parties have the names and addresses of all the voters.” In short, the Excelsior rule is fundamental to the integrity of the democratic process in union elections.

Like other private universities, Harvard appears to be banking on Trump appointees to the Labor Board to help fight off graduate student unionization. But Harvard’s going the extra mile in seeking to undermine all unions’ right to an accurate list of employees during a union election campaign.

In its appeal, Harvard wants it both ways. The university argues that its efforts to compile a complete list of eligible workers were hampered by the technological challenges of using its payroll software. It also argues that the proliferation of communication technology has made it easier for parties to contact their electorate without a list of eligible workers from the employer.

In other words, Harvard wants the NLRB to accept as a precedent for future elections the claim that technology is simultaneously too difficult for the purposes of knowing who works for them but so easy that sharing this knowledge is not necessary.

The failure of Harvard administrators to produce a complete and accurate list of its student employees might speak to reasons why graduate students want a union in the first place: to have a formal check on administrative oversights and errors that lead to missing or late pay, poor communication on changes to health benefits, and neglect of office complaints. If graduate students cannot count on the university's administration to know who works for it, how can they count on the administration to address workplace concerns?

We recall from our experience as students back in the 1970s and 1980s that graduate students faced considerable stress from a payroll system prone to delivering paychecks so late that local landlords threatened them with penalties and evictions. Decades later, we hear of graduate students encountering the same problem. Only now Boston rents are stratospheric, and landlords are often even less merciful.

Realizing that the benevolent Harvard administration could not correct the tardy payroll problem after several decades, a new generation of graduate employees has decided enough is enough.

If Harvard wins its appeal, requirements for employers to compile lists fairly would be gravely weakened, hurting any union drive by any type of worker joining any union.
Harvard administrators appear delighted that a Donald Trump-appointed National Labor Relations Board might be willing to dismantle democratic protections for workplaces across the whole country.

The warm embrace of Trump on labor policies flies in the face of university leaders’ howling disavowal of the president elsewhere. Within the first fortnight of Trump taking office, Harvard president Drew Gilpin Faust and 46 other university presidents issued a statement condemning his executive order banning people from seven Muslim countries as a threat to “both American higher education and the defining principles of our country.” They worried that Trump “is dimming the lamp of liberty and staining the country’s reputation.”

As graduates of Harvard and on occasion employees, we have long witnessed the university’s odd combination of liberal rhetoric on burning social issues and then ice-cold repudiation when it comes to the rights of labor on campus. Stout opposition to Trumpism gives way to cozy collaboration on labor policies.

Harvard should not be allowed to have it both ways. It is time for the administration to stop trying to undermine workers’ rights and to let graduate students decide for themselves whether they indeed want collective bargaining.

John Trumpbour is Research Director at Harvard’s Labor and Worklife Program. Chris Tilly teaches urban planning at UCLA and is the former director of the UCLA Institute for Research on Labor and Employment.

Related
Viewpoints: How Academic Workers’ Leverage Can Grow in a Long-Haul Strike »
Challengers Win Big in UAW Elections; Presidency Headed to Run-Off »
Ballots Are Out in UAW Election, with Contrasting Visions of Unionism Up for Leadership »
The Hows, Whys, and Whats of ULP Strikes »
Teamsters United Takes the Wheel »