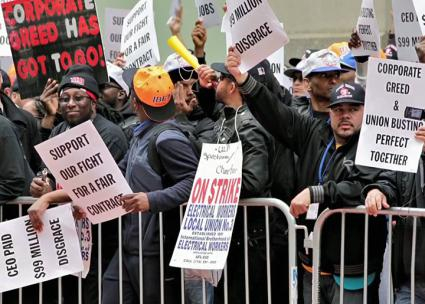 Some 1,800 members of IBEW Local 3 have been on strike at Spectrum/Time Warner Cable in New York and New Jersey since March 28. Photo: Onwy Uzoigwe.

Some 1,800 members of Electrical Workers (IBEW) Local 3 have been on strike at Spectrum/Time Warner Cable in New York and New Jersey since March 28, more than four months ago. Since then, only a fraction of the workforce has crossed picket lines, but the company is working hard to keep up normal operations by using scabs and subcontractors to break the strike.

Spectrum is part of Charter Communications, the second largest cable provider in the U.S. and a telecommunications giant, providing services to roughly 25 million customers in 41 states, two and a half million of which reside in New York. The CEO, Tom Rutledge, has met with Donald Trump in the White House earlier this year, and the company is touted by Trump as a job creator investing in its U.S. workforce.

A group of strikers and their family members talked to Joe Richard about their organizing to win the strike. Suhan Lee is a member of Local 3 and was hired just a few months before the strike began. Beata Moon is a member of the United Federation of Teachers, a parent activist, and the spouse of an IBEW striker; Amanda Felix and Lisa Spychalski are also married to Local 3 strikers, and have become active through a new group of strikers and family members. Local 3 members have now been on strike for over four months.

Can you give us some background on the strike? What were the company's demands, and what's been the relationship of the union to the company in the past?

Suhan: We've been without a contract since 2013. The company resisted bargaining a contract with Local 3 while the negotiations between Charter Spectrum and Time Warner Cable played out. Before that, the union didn't have such a hostile relationship with Time Warner Cable. The new ownership changed that.

Lisa: When Tom Rutledge, the current CEO, was ready to leave Cablevision, he was only making $16 million a year, and that wasn't good enough for him. So he left, and he brought all of his boys with him to Spectrum. All the managers that came in started telling everyone they were going to run the company differently.

So the company put forward a whole list of concessions they were demanding from the union?

Suhan: Yes. They wanted to take away payments to our union-controlled health care fund. They also wanted to take away our pensions, stop making contributions to our Education and Cultural Fund, and take over training technicians away from the union and have company control over training, in order to deny people promotions based on increased skills.

Lisa: They're stopping everybody from being able to achieve the higher rates through company control over certifications, and the workers have to use faulty equipment when they go up for certifications.

WHAT YOU CAN DO

Supporters can contribute to the Spectrum Striking Families Hardship Fund.

How did the union handle preparations for the strike?

Beata: Every striker and their family received strike pay from the union of about $150 per week for the first eight weeks of the strike, until unemployment insurance kicked in.

Amanda: It was called very quickly, and the union even moved up the timeline from April 1 to March 28. April 1 is the beginning of the new accounting year for Spectrum and was when the contract expired. But then word came down to launch the strike on the 28th. Some guys showed up to work, and they didn't even know. Their co-workers told them, "Hey, we're on strike now."

There was also a strike vote in the last round of negotiations back in 2013. They were ready to go on strike but the union didn't call a strike.

Were there concessions in the last contract with Time Warner Cable?

Suhan: Yes. The union gave up specific riders to the contract that made the company pay FICA contributions after a certain date. So all new hires had to pay contributions. It's 7.65 percent of your paycheck.

So there were two tiers of workers at the company before the strike?

Can you tell us about what strike activity looked like at the beginning of the strike?

Amanda: It was strong at the beginning. The first rally downtown was really big.

Beata: There was a big rally downtown, with elected officials and hundreds of strikers and supporters. And the union chartered buses to take people to Stamford, Conn., to protest at the company headquarters. So there were a lot of people out picketing. Strikers also had to participate in picketing or else they wouldn't receive strike pay.

Amanda: At the Astoria garage in Queens, it was really strong at the beginning.

Suhan: I was at the Paidge Avenue garage in Brooklyn, and our lines were really strong for the first few weeks of the strike. We started picketing the payment centers after the first few weeks of the strike, which was pretty effective because we weren't out in some isolated area in front of a garage. People can pick up and drop off equipment like routers at the payment centers, as well as upgrade or downgrade service and pay their bills.

Amanda: In Astoria, everyone knew what was going on with the strike, because of the noise we were making on the picket lines.

Suhan: You should've seen how it went on the Upper East Side. Those people were so quick to call the police.

Lisa: Those rich people didn't like it, huh? We went to John Quigley's house [another Spectrum executive] out in New Jersey last weekend to picket, and that was the best thing in the world. The cop who was there told us, "As soon as it's 10:30 a.m., you can make as much noise as you want."

A neighbor came out, and she was yelling and screaming because she wanted us away from their house. The cop explained things to her and told her the law. So then she called the cops on the cop, and demanded his supervisor come out and discipline him for not enforcing the law. But there was nothing they could do.

What were some of the other tactics that strikers used?

Beata: We got a resolution together and asked Local 3 to get introductions to other unions to start raising money for our strike fund. We went ahead and started contacting the heads of unions and asking them to start making donations to our Emergency Hardship fund.

We're also reaching out to people who support us to help. Other members also started a Twitter campaign and started spreading our story on social media, which has been great.

At what point did you all realize you had to start organizing on your own to win the strike?

Amanda: When people stopped coming to the picket lines. And there was a week when we saw 10-20 people turn scab and cross the lines. That's when we knew we had to start doing something to keep people from crossing.

Beata: There was also a push for a City Council subcommittee to investigate its franchise agreement with Spectrum, but I found out that subcommittee didn't have much teeth to do anything.

Amanda: We had so much hope after the New York City Council meeting earlier in the summer. We really thought, "Oh, these people are with us! They're going to make something happen!" And then a week went by. And another week. And it seemed like it was just really for show, so we realized, "Okay, we've really got to start doing something."

So what are you currently working on?

Beata: We've set up our own Emergency Hardship fund that we're using to help people in dire need. As we raise more money, we're using it to keep people from getting evicted from their apartments or losing their homes or keeping their utilities on. We've already helped one family avoid eviction, and we're going to keep actively working.

We're also going to rally at Spectrum headquarters on August 9, and we're continuing to reinforce picket lines across New York and New Jersey.

Amanda: The mass pickets are also really starting to build momentum. So that's helping a lot, too. When other strikers are seeing our pictures we share of hundreds of members out at a picket line, it's helping us recruit people to get more active.

Is there anything else you would want people to know about the strike?

Lisa: Yes. We will fight to the end.

Beata: I think that we all want to rely on someone else to solve our problems, but if we want something done, we have to find a way to contribute, and not just wait around for someone else.

Lisa: We're also fighting for the future. It's not just about us. It's about the future of our union.

Amanda: With a strike, you'll see a lot of disappointment. People will always think about "me, me, me," but people need to understand there's a bigger picture here. People need to learn what a union really is and how beneficial they are for us. We can't allow our unions to get busted.

Suhan: This strike is about the bigger fight between corporations and workers. I believe this is part of a war being waged against organized labor, and the corporations' efforts are only increasing. The only way to combat the type and scale of their attack is through awareness, education, and organizing.

Related
'We'll Never Be in This Position Again': Striking Deere Workers Hold Out for Better Deal »
‘It Feels Like We Started a Movement’: Despite Mixed Results in Frito-Lay Strike, Workers Proud They Stood Up »
Nabisco Workers Hope Strike Inspires Others: 'There's More of Us than There Are of Them' »
'Let's Put a Wrench in Things Now': Deere Workers Strike as Company Rakes in Record Profits »
John Deere Workers Overwhelmingly Reject Contract, Could Strike Wednesday Night »