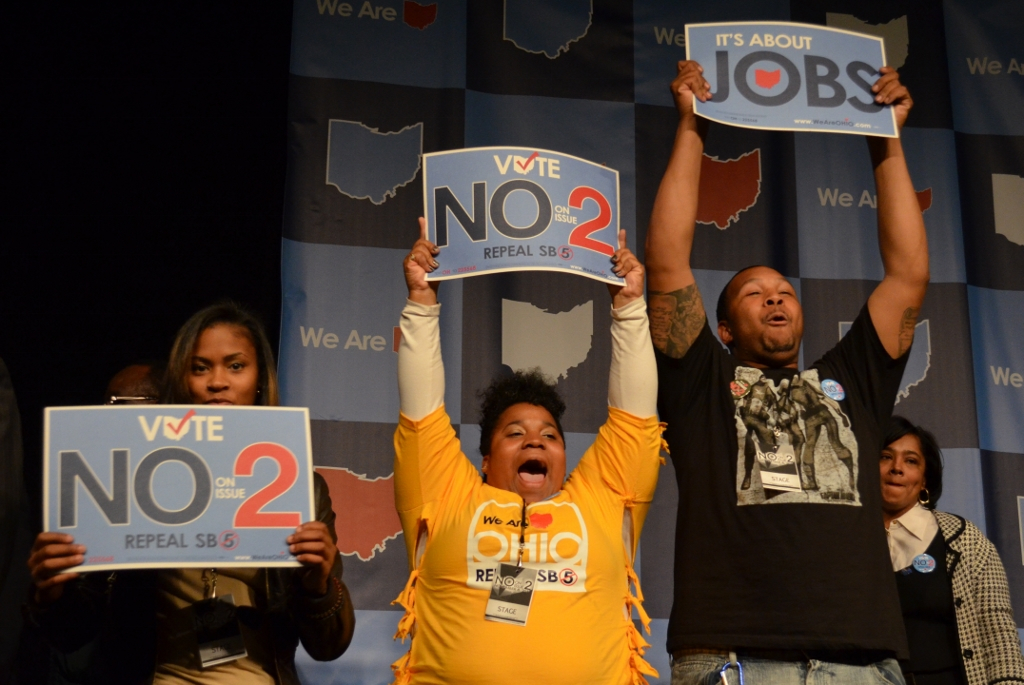 Unlike in Wisconsin, Ohioans were able to put their state's anti-union law to a vote, called "Question 2." They repealed the law, 62 to 38 percent, when the labor movement united around the effort. Photo: NEA.

This November marks the third anniversary of a major labor movement victory: the defeat of Ohio’s union-busting Senate Bill 5, 62 to 38 percent, in a public referendum.

The people’s veto of SB 5 was a triumph of organization, and of labor’s ability to tell its story to ordinary people. I draw out its lessons for organizers in my book, Collective Bargaining and the Battle of Ohio: The Defeat of Senate Bill 5 and the Struggle to Defend the Middle Class.

Worse than simply “right to work,” the 500-page SB 5 was designed to destroy public unions’ ability to operate—or even, in some cases, to exist. It was championed by Governor John Kasich and the Republican majorities in both houses of the legislature, but its roots were in several model bills generated by the right-wing American Legislative Exchange Council.

Collective Bargaining and the Battle of Ohio: The Defeat of Senate Bill 5 and the Struggle to Defend the Middle Class, by John McNay, New York: Palgrave Macmillan, 2013.

All public sector strikes would become illegal. Binding arbitration would be eliminated. Health insurance and staffing would be off-limits for negotiation. Pay increases could only be in the form of merit pay. “Fair share” fees for employees who chose not to join the union would be prohibited. Faculty members would be ineligible for union membership if they did any of the service work that is a central part of the job, such as work on curriculum committees, hiring committees, promotion committees, and student advising.

Wisconsin and Michigan faced similar fights, but we had a key advantage. Ohioans have the right to put up for public referendum bills that are passed by the state legislature. That gave us an additional way to fight back.

When it became clear that, despite appeals and protests, the legislature was going to pass SB 5, labor leaders in the state began to plan the repeal campaign. They formed We Are Ohio, a coalition of unions, faith groups, and progressive organizations.

The 2011 uprising in Wisconsin, especially its huge crowds, was a constant inspiration to us. Even the coalition’s name came about because of the We Are Wisconsin organization. And when union-busting legislation was forced on them despite their efforts, we redoubled our drive, seeing the reality that the extremists could crush us, too.

We Are Ohio’s coalition was very broad: professors, Steelworkers, secretaries, ministers, Teamsters, police, nurses, students, firefighters, auto workers, and janitors. Unions were obviously prominent, but we had organizations behind us as diverse as the Amos project (a Catholic social justice group), Black ministers groups, the Blue-Green Alliance of the Sierra Club, and the Farmers’ Union. Even the Catholic bishops came out against SB 5.

To get an idea of the scale of the campaign, during the petition drive to get SB 5 on the ballot for repeal, we had 10,000 volunteers. They spread out across the state, gathering a record 1.3 million signatures (though only 242,000 were needed).

When the parade arrived at the secretary of state's office with a semi-truck to deliver all those petition booklets, a structural engineer had to be called in to see if the building's floor could take the weight.

How did we motivate people? The Republicans helped, because of their heavy-handed and arrogant behavior during the bill’s passage. They offended even some of their own supporters.

But mainly, local union leaders all over the state sat down with their members and explained just what they were about to lose. Many, many rank-and-filers took a stand. It was inspiring to rally and march with private-sector union members from the United Auto Workers, Steelworkers, and Food and Commercial Workers—who knew that if the public sector labor movement could be eliminated, they would be next.

It also appears we spent a little more money than the other side, which is really unusual—though it is hard to track the dark money. This happened, in part, because early polls had shown that the public did not like the un-democratic way in which the bill was passed so some of the right-wing money that would have been forthcoming was not. But it was also because people and organizations not usually seen as big spenders, spent. The AAUP, certainly not a big union contributed over $700,000. The UFCW, which would have been largely unaffected by SB 5, spent over $1 million.

The lessons for activists are clear:

1. A really broad coalition is essential. Divisions have to be put aside. We Are Ohio was also successful because it involved more than just unions.

2. Decision-making has to be genuinely shared. At the top of We Are Ohio’s organization were the big unions in its executive committee: AFL-CIO, Ohio Education Association, Service Employees, Ohio Federation of Teachers, Food and Commercial Workers (UFCW), Communications Workers, AFSCME. Then there was a steering committee that included all of the executive committee plus the Ohio Nurses Association, Firefighters, Steelworkers, Fraternal Order of Police, UAW, and the Ohio Conference of the AAUP.

When Kasich made a bid to split up the coalition by making separate deals with some unions, we stuck together.

3. Communication was genuinely open. On top of the committee meetings, We Are Ohio routinely had conference calls with the member unions and other coalition groups.

4. Remain non-partisan. We Are Ohio kept its focus on collective bargaining rights. When the College Democrats on the University of Cincinnati (UC) campus were collecting signatures, a couple of students stopped to say, “We are Republicans and we’re opposed to SB 5, too. You’d get more signatures if you’d put your signs away.” The students did just that.

I think we convinced many Ohioans, including some Republicans, that this was an attack on democracy. People agreed that the option to have a union should be left up to workers, not something legislative extremists can simply take away.

5. We used just about every technique in the tool box. We phone-banked, both widely and internally. We went on labor walks with our allies. We had rallies. We also stalked places where there would be crowds: church picnics, Reds baseball games, farmers markets.

At UC, we successfully got the Faculty Senate, the Student Senate, and the Graduate Students Organization to all come out against SB 5.

We also used a “friends and family” strategy for people who were uncomfortable talking with strangers. By each individual taking 10-20 names of people from their social circle to contact, this also took names off the canvassing database lists so that canvassers could be more effective in reaching Ohioans who had not yet been contacted. Among the goals was to reduce the numbers of friends and family members of union people who either don’t vote or don’t vote union.

6. In the long term, we created linkages. Some are as simple as inviting representatives of other unions to come address each other’s meetings and conferences. Another example: the AAUP, OFT, OEA, and the Ohio Students Association formed a new coalition to fight for better funding for higher education.

We Are Ohio remains intact and meets regularly, staying vigilant against another attack, and continuing to build relationships within the labor movement and among like-minded progressive organizations.

John McNay is former president of the University of Cincinnati chapter of the American Association of University Professors, and author of Collective Bargaining and the Battle of Ohio: The Defeat of Senate Bill 5 and the Struggle to Defend the Middle Class.