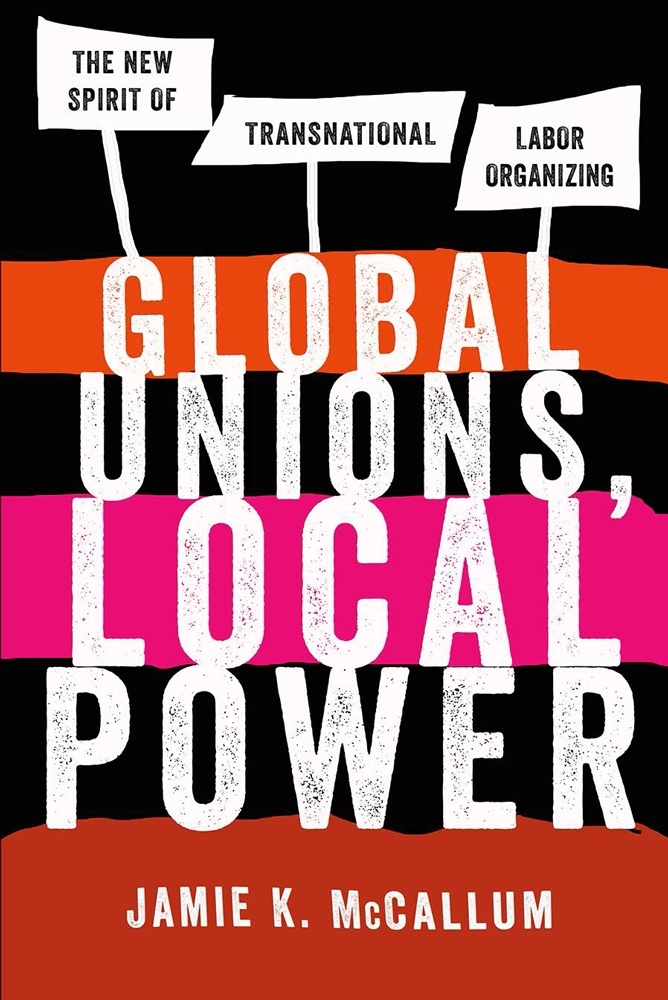 The belief that labor must “go global” to combat transnational employers has gained currency in U.S. unions.

But despite growing acceptance of the need for cross-border cooperation, few studies of successful campaigns are available to guide would-be global activists.

McCallum says no other campaign by a global union federation has matched this one in scope, resources employed, and implementation at the local level.

One Size Doesn’t Fit All

Yet, like a neutrality agreement, its strength lies in how well the union can enforce it. The abilities of national and local unions to enforce the global agreement with G4S varied widely from country to country.

McCallum’s research took him around the globe, as he followed the campaign from the U.S. to Europe to South Africa to India. His book looks closely at how the G4S campaign played out in each location.

His central argument is that successful transnational campaigns require constant give and take between unions operating globally and locally. There is no one-size-fits-all model. Different political and economic conditions, and different union histories, mean global campaigns will be implemented in different ways—with varying levels of success.

These local differences may then affect the global contours of the campaign. Campaign success requires a great deal of flexibility from participants to negotiate their differences.

The G4S campaign was initially driven by the Property Services Division at SEIU. Staffers analyzed the private security industry and concluded that organizing workers at G4S would facilitate industry-wide organizing in the U.S.

SEIU partnered with UNI and initially turned to European unions to assist. SEIU already had several years of experience in training European unions how to use the comprehensive campaign model it had developed with other North American unions. The model includes sophisticated industry research, methodical record-keeping on the workforce, carefully coordinated outreach to workers, and choreographed campaign strategies to map out where and when to best focus campaign resources.

But its collaboration with GMB—the union representing G4S workers in the U.K.—did not go well.

On the one hand, GMB had a long-standing collective bargaining agreement with G4S and a generally amicable relationship. Its leaders felt this would be threatened by SEIU’s more confrontational tactics. On the other hand, GMB staff raised criticisms of SEIU—that the union operated in a top-down and undemocratic fashion.

Because of these difficulties, UNI and SEIU decided to reorient the campaign toward the global South.

In South Africa, the campaign partnered with the transport union SATAWU, which was searching for ways to revitalize in the mid-2000s. SATAWU had been oriented toward social movement unionism during the apartheid period but had since lapsed into simply servicing its existing members. UNI trained SATAWU staff to use the comprehensive campaign organizing model—and the union’s private security membership grew 40 percent.

McCallum argues that the shift away from the servicing model and toward the organizing model also led to internal transformations in SATAWU: “more member activity, more internal democracy, more shop-floor organization, and more capacity to organize workers.”

In India, the results were far less positive. Unlike South African unions, which had extensive experience in international solidarity because of their anti-apartheid struggle, Indian unions had little experience of this kind.

INTUC faced strong resistance from the company and so far has not been successful in unionizing GS4. In the north, CITU ultimately became disillusioned with UNI and parted ways without adding members.

Given the stronger employer resistance the unions faced in India, INTUC and UNI decided to shift their strategy, from targeting the employer to lobbying for national legislation to raise labor standards in the industry. But comprehensive legislation has yet to pass.

While the book focuses primarily on South Africa, India and the United States, McCallum notes that the global framework agreement had been at least partially implemented in 11 countries at the time the book was written, with varying degrees of success.

Notable successes include the campaign in Poland, where wages and standards have improved throughout the private security industry. The campaign also produced new unions for guards in Nepal, Congo, Ghana, and several countries in Latin America.

And a UNI report on standards in the industry was used to help win a holiday bonus in Morocco, a first contract in Uganda, and a 16 percent wage increase in Malawi.

In the U.S., the global framework agreement eventually enabled SEIU to organize 1,000 G4S security guards. Many in SEIU were disappointed that such a large outlay of resources for the global campaign resulted in so few new members in the U.S.

But McCallum argues such a perspective is short-sighted. Organizing an industry leader also made it easier to organize guards working for other employers. This is because, in the SEIU security guards campaign, bargaining is triggered when a certain threshold of organization in reached in a particular city. Winning a framework agreement with G4S made it easier to reach the threshold.

But despite the successes of the campaign, SEIU subsequently moved away from in-depth engagement with global unionism.

The G4S campaign is notable for its clear-cut successes: private security guards in many countries won gains through the global framework agreement.

But the campaign was driven primarily by a union and a global union federation based in the North, on behalf of unions in the South. That’s a problem, considering the long and shameful history of U.S. (and British) unions’ basing their international relations on their own needs, not those of workers in other countries. Though local implementation of the campaign was shaped to a significant degree by unions in the South, it would certainly have been more democratic for all unions with a stake in the outcome to have had an equal say in the global campaign strategy.

Aside from the leading role played by unions in the global North, the G4S campaign was also a heavily top-down enterprise. McCallum notes that this is in line with the dominant strand of global unionism today.

The comprehensive campaign model, though it enabled significant gains for security guards in many countries, arguably forced a heavy reliance on paid, professional staff. That’s potentially antithetical to the kind of rank-and-file internationalism many union activists prefer.

This contradiction at the international level, of course, mirrors contradictions inside the U.S. Unions like SEIU have increased their numbers but been criticized for operating in a top-down manner.

McCallum does not prescribe a solution for this contradiction. He does argue that a campaign of this magnitude may require a unified narrative and goal.

Is a top-down approach really necessary for success in transnational unionism? It remains an open question. But for activists interested in building a robust and democratic global union movement from below, McCallum’s analysis of the strengths and weaknesses of the G4S campaign is essential reading.

Katy Fox-Hodess is a graduate student in sociology and former Head Steward and Chair of UAW 2865, the UC Student-Workers Union at the University of California, Berkeley. Her PhD dissertation examines international solidarity among dockworkers’ unions.