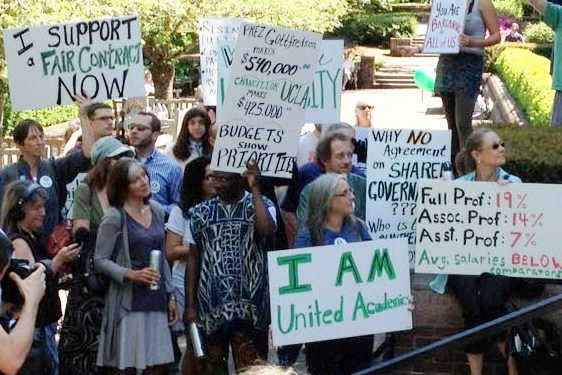 Teachers at the University of Oregon approved by 99 percent a first contract yesterday, the fruits of solidarity between tenure-track and contingent faculty that began in 2007.

United Academics (UA), which is affiliated with both the American Federation of Teachers (AFT) and the American Association of University Professors (AAUP), won a representation election in April 2012. A strong contract campaign helped win the agreement.

Unity across the Tracks

Moving up the job ladder from assistant professor to associate to full, university professors have been accustomed to following a path to tenure, the lifetime right to keep their position unless terminated for just cause. But today universities rely more and more on much cheaper “adjunct” or “contingent” faculty members, hired year to year or term to term, who lack job security, are paid less, are often part-time, and usually have no benefits.

Non-tenure-track positions now account for 68 percent of all faculty appointments in U.S. higher education, according to the AAUP. More than half of U of O faculty members are not on the track.

At Oregon, faculty decided to organize themselves into one bargaining unit covering both tenure-track and contingent positions. At most other places adjunct faculty have been organizing separately, either university by university or citywide.

The union insisted that negotiations be conducted in public and its Contract Action Team packed the room with members wanting to observe. As many as 130 members turned out for an August meeting. (Caucuses, when bargaining team members met among themselves, remained private, as did the few “sidebar” off-the-record meetings between spokespersons of both sides.)

So many faculty members turned out that the meeting had to be moved to a larger room. An economics professor blogged live accounts from his laptop. “We couldn’t make comments, but we could roll our eyes,” said Nancy Bray, who observed most of the sessions.

The administration’s negotiators apparently got the message. They withdrew proposals to enforce “civility” (used on other campuses to punish unpopular views) and to monitor faculty emails.

Faculty will get raises averaging 12 percent between now and June 2015. Salaries at U of O rank near the bottom when compared to those at other research universities. “We’re not trying to compare with Stanford and Yale,” Cramer said. “We’re behind the universities of Washington, Iowa, and Indiana.”

Raises have been “hit or miss,” according to Cramer, who has gone five years without an increase even though she was promoted. In the meantime she has had to pay much more for health insurance, she pointed out, so she is “earning less in real terms.”

Besides across-the-board raises, faculty will receive 8 percent increases when promoted, and the contract sets aside pools of money to be used for equity and merit increases.

Putting all faculty members on a tenure track was not a goal. Instead, the goal for non-tenure-track teachers was to stabilize employment conditions and make them predictable, for better job security.

On that, significant progress was made. The contract defines classifications and ranks within each classification. Two kinds of non-tenure-track positions are allowed. “Adjunct” positions will have to be truly “intermittent or of limited duration.” “Career” non-tenure-track positions such as instructor, lecturer, research assistant, and librarian are also defined. After two one-year appointments, an adjunct may petition to be reclassified as career.

“The career concept has been around in policy since 2008,” Bramhall said—but with no enforcement mechanism, it was ignored in many departments. With the union contract, it will be “transparent and enforceable.”

The new contract says teachers hired into career, non-tenure-track positions can be offered one-year appointments for only their first three years. Starting with their fourth year, their appointments will have to be for a minimum of two years (or three years if the teacher is promoted).

Management will have to notify career employees whether their appointments will be renewed by May 1, or keep paying them. If a career appointment is not renewed, specific reasons will have to be provided in writing. These latter two provisions have little teeth, but Bramhall called them “planted language” that can be used to gather information to build on in future negotiations.

Current employees with more than three years of service will have their positions reviewed for reclassification as career. Some 400 non-tenure-track faculty (some of whom have been working on a year-to-year basis for 15 or 20 years) will be able to gain career status and multi-year appointments as a result.

Unfair compensation for the non-tenure-track was addressed as well. Some full-timers have been paid as little as $20,000 per year. Now their floor salary will be about $36,000.

Keeping positions below half-time to avoid paying benefits will be prohibited. Faculty committees in each department will define full-time equivalents; non-tenure-track employees will participate in these committees. The university will continue to pay 95 percent of family health insurance premiums for all who work at least half-time.

Stefan Ostrach is a retired AFSCME and Teamsters rep who writes on labor and economic issues.