Viewpoint: How to Make Verizon Hear Us Next Time 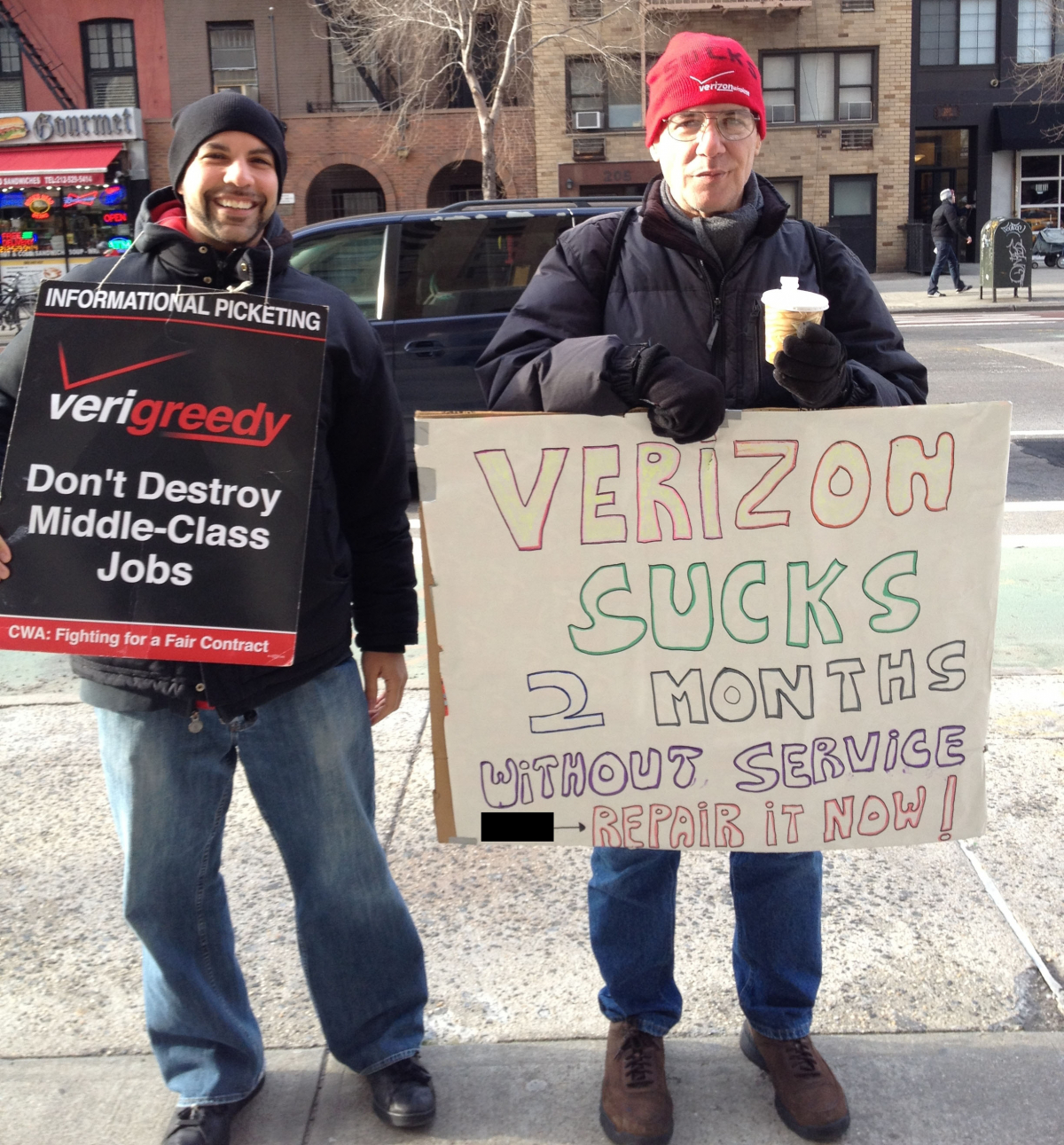 Chief steward Dominic Renda and a customer protested Verizon's poor service. The company is abandoning its copper infrastructure in favor of wireless, leaving many in the lurch.

For the past decade, the Communications Workers’ contracts with Verizon have included givebacks.

During our 2003 contract, we lost the language negotiated in 2000 that was supposed to enable us to organize. Because of management resistance, this language never led to card-check recognition for Verizon Wireless employees. Wireless workers remain today almost entirely non-union.

We also lost ground on job security. Anyone hired after the signing of the 2003 contract is not covered under the job security language. This establishment of two tiers made the union weaker by dividing new hires from older members.

The 2012 agreement has even more givebacks. New hires will not receive a pension when they retire; they are only eligible for a 401k plan. Wages will not keep up with inflation, and will not even come close to matching the rising costs of college tuition. The idea of sending our children to college becomes less of a reality.

We need a winning strategy that will give CWA staying power and get the contracts our members deserve. Now—during this relative lull in activity between Verizon and our union, with the contract expiring in 2015—is a good time to develop this strategy.

Ally with Public for Telecom Regulation

The first step is a strong alliance between the union and the public.

Consider the Chicago Teachers Union, who struck last year and won a good contract. Before the strike, the CTU built such an alliance by mobilizing to stop school closings. They were unsuccessful in stopping all of the closings, but successful in getting public support during the strike. We can win the public’s support too.

To analyze how, we need to first look at the main services that Verizon sells: home phones, which run on copper wirelines, and wireless, which gets its reception through cell towers. The company also offers FiOS, the fiber optic system that handles fast Internet, high-definition TV, and phone service.

Although home phone service is regulated for the benefit of the consumer, cell phones and FiOS are not. We can foster an alliance with the public by pushing hard and publicly for regulations on FiOS and wireless similar to the current regulations on wireline, such as discounted service for poor customers, known as Lifeline.

FiOS and wireless customers also deserve the ability to declare what is known as a medical emergency. Presently, copper line customers can provide a note from their doctor saying that if Verizon cuts off their phone service for nonpayment, a serious risk to their health would result because they would be unable to contact their doctor. Once the note is provided, Verizon is prevented from interrupting local phone service for either 30 or 60 days, depending on the severity of illness, giving the customer additional time to pay the bill.

Verizon management is neglecting its copper lines, focusing instead on FiOS and focusing even more heavily on wireless. In recent years, copper line customers have gone as long as months without phone service while they waited for Verizon to repair a malfunctioning line. Sometimes, if a phone line goes down, Verizon will replace the copper line with FiOS cables. We need to do everything in our power to ensure copper is not neglected or sold off to half-broke, bottom-feeding outfits, like FairPoint and Frontier since copper is essential during a power outage or cell phone outage.

After Superstorm Sandy, large segments of the public were without power for longer than eight hours, which is the longest FiOS can be relied upon when there’s no electricity.

After the recent terrorist attack in Boston, cell phone service was spotty at best because the larger than usual volume of calls overloaded the cellular networks. In an emergency, if cell phone service is inaccessible and no one has copper lines anymore, no one will be able to call 911 or reach their loved ones.

Put Money Where It Counts

The next step toward making CWA more effective is to increase the weekly strike fund payout. The higher the increase, the more confident and financially secure our members will be while on strike.

To facilitate such an increase, we would have to cut costs.

If we fund the Democratic Party at all, we’re doing worse than flushing our money down the toilet. The Democrats have done as much harm to organized labor as the Republicans. Obama’s government has deported more immigrants than the miserable Bush administration, making unionization efforts more difficult as a result. He and the Democrats were also responsible for the failure of the Employee Free Choice Act, which would have allowed unionization by card-check. And Obama’s health care reform is similar to Republican Mitt Romney’s reform while he was governor of Massachusetts!

Unionization rates have been falling regardless of which party is in power. Unless we plan to spend our money on building a third-party alternative, we’d be better off using it for our strike fund.

Aside from political spending, we can cut union leaders’ salaries—from the president on down to shop stewards like myself. None of us like to make do with less, but we should all see the importance of sacrifice for the long-term goal of the continued existence of our labor organization.

I personally would do the job as effectively if I wasn’t paid at all by the union. I could manage on the pay Verizon gives me, like the rest of my co-workers. Fighting for my co-workers and ensuring management abides by our contract is enough of a reward for me.

We should direct our spending towards organizing Verizon Wireless into our union, and continuing to unionize other telecommunications companies such as Cablevision.

Help Others Raise the Bar

Finally, we need to increase our solidarity efforts with other unions.

Part of Verizon’s justification for making us pay into our health benefits was that everyone else already pays into theirs. If we support other unions (whether they are on strike, locked out, or working without a contract), then we’re raising the bar for what every worker in America expects in a contract.

As a means to achieving these changes for our union, we can also look to the Chicago Teachers Union. A rank and file organization known as CORE, or the Caucus Of Rank-and-file Educators, transformed their union into one that successfully challenged Chicago Mayor Rahm Emmanuel’s plan to give the teachers an offensively concessionary contract.

We at CWA need to organize our rank-and-file members to become activists so that we can stop what is sure to be Verizon’s next round of concessionary demands. We can also attend the next Labor Notes Conference in spring 2014, so we can meet activists from other unions, and learn from them as well.