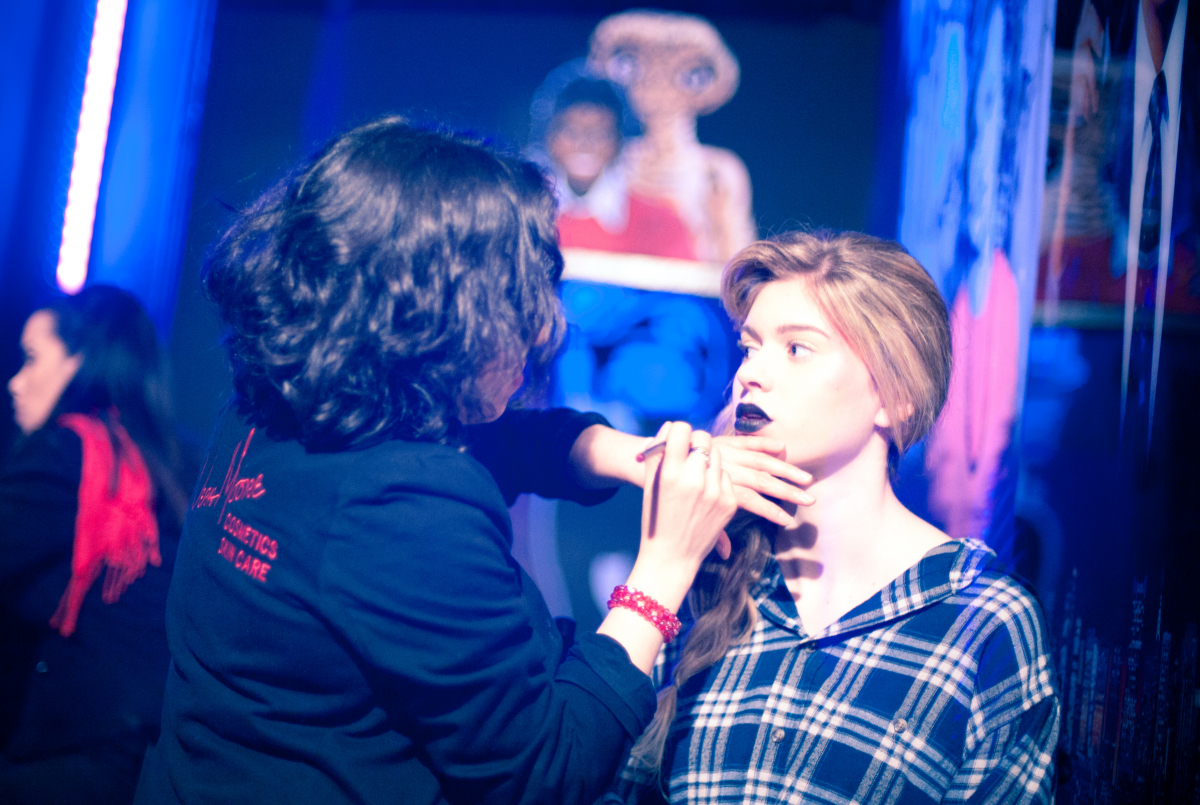 Fashion models are demanding workplace rights and just compensation. Most are paid badly, if at all. Only a tiny percent make a comfortable living, while the majority are in debt to their agencies, paid in clothes rather than cash, or endure wage theft. Photo: Jason Hargrove.

Strip off the gloss, says model Sara Ziff, and you have a workforce of young women classified as independent contractors, not covered by minimum wage laws, who are often paid in clothes rather than cash, and are in debt to their modeling agencies. Many in the U.S. are undocumented.

Youth and powerlessness are sought by modeling agencies, who recruit models as young as 12 and 13. “The industry relies on a labor force of children,” said Ziff, who started working as a model at 14.

Ziff and other models formed the Model Alliance last year to establish fair labor standards in the fashion industry. The effort has implications for women beyond the industry because mainstream fashion sets the tone for how women are expected to look.

The extreme youth, whiteness, and thinness promoted by fashion advertising reflects a workforce that is picked for its powerlessness. Even racial discrimination can’t be challenged, because, as in Hollywood, bias is excused as art.

The models have paired up with two unions that represent live performers, Actors Equity and the American Guild of Musical Artists, and they’ve been putting pressure on magazines, agencies, and fashion shows, with some success.

Indignities abound. Model Anja Rubik noted that, when she started, models at fashion shows had privacy when they were changing, but at a 2010 New York Fashion Week there was no privacy. “When we were backstage everyone [including photographers] could see us naked.”

The Model Alliance fought back and this year models changed in privacy, stopping the invasive photography that had been driving them up the wall.

They’ve also put pressure on Vogue, wresting an agreement in May from all 19 international editions of the magazine. The company promised not to hire models under 16, or models who appear to have an eating disorder.

Ziff spent five years filming her co-workers backstage at fashion events, recording what they want to see change about their working conditions. In 2010 she released the resulting film, “Picture Me.”

Health and safety were primary concerns. Sexual harassment and assault are widespread but underreported because models fear retaliation. One model who recalled a sexual assault at 16 later asked that the account be stricken from the film because she feared losing work. Others spoke out about sexual harassment on camera, braving retaliation.

Models compromise their health to keep their jobs. Model Amy Lemons said that her agent told her to eat only one rice cake a day—and if she still didn’t lose weight, eat half a rice cake.

“They’re telling me to be anorexic, flat out,” she said. She was 17 at the time. Some contracts stipulate that more than a 1 centimeter gain in hip size is grounds for firing, said Ziff.

One model interviewed by Ziff said she became anorexic after she was told by a photographer that she needed to lose weight. She said her immune system was compromised and her skin became grey. Anorexia is a serious disease that can be fatal.

Lemons said she saw young women eat cotton balls soaked in lemon juice to reduce hunger pangs. They knew it was unhealthy, Lemons said, but they needed the money, making the calculation: “I might get really sick for a short time from the cotton ball but I’m going to be able to pay for my family to eat.” Some were immigrants from Eastern Europe.

In the 1930s, actors unions developed standards to protect child performers, enforcing contracts and eventually winning laws in California and New York guaranteeing tutors to actors who miss school for work, and creating trust accounts so that adults don’t pilfer their pay before they reach adulthood.

Models have none of these protections. “It’s still like the Wild West,” said Lemons, who started working at 12 and was on the cover of Italian Vogue at 14.

Not coincidentally, many who work in the New York fashion industry are undocumented and just learning English, as well as being minors. It all adds up to more power, and a cheaper workforce, for the agencies, labels, and magazines that employ them.

As more models saw the film, it became an organizing tool, and they contacted the filmmaker for advice and help.

Ziff said she met models who were in debt to their agencies, some for as much as $100,000. Agencies claim they are spending money to promote the models, but they don’t allow models to see the accounts. Financial transparency is a Model Alliance demand.

Pay has dropped. A few years ago runway shows paid between $1,000 and $5,000, said model activists, but now many agencies now don’t even tell the workers what they’re being paid, and many are paid in clothing rather than cash.

“You can’t pay your rent with a tank top,” said Ziff.

MODELS ARE THE MODEL

The pressure on these workers to look prepubescent and emaciated has an impact beyond the models themselves, setting impossible beauty standards for all women, said African-American fashion writer Vanessa Williams. “If you’re Black and tubby all you want to be is white and thin…if you’re a guy, all you want are thin white girls.”

Williams’ sentiments echoed the feminists who first picketed the Miss America Pageant in 1968, denouncing artificial beauty requirements and throwing bras, girdles, curlers, and fashion magazines into a “Freedom Trash Can.” (Counter to legend, no bras were burned, but only because fires were banned.)

“Every day in a woman’s life is a walking Miss America Pageant,” said Rosalyn Baxandall on a TV talk show after she and hundreds of other women picketed the contest in Atlantic City. A secret delegation unfurled a banner inside the hall announcing “Women’s Liberation,” the first time the phrase hit the mainstream press.

Following feminist organizing in the late 1960s, clothing and beauty standards for women loosened for a while. Flat shoes and natural hairstyles became fashionable, while girdles and heavy makeup went “out.” Women students won the right to wear pants to class, and women lawyers the right to wear pants in court. Black liberation established the beauty of natural hairstyles for black women.

We’ve lost ground, say feminists, as high heels have made a comeback. Racially, the runway is nearly as segregated as ever. Ziff recalled casting call notes that read, “no ethnic girls,” and she noted that in other industries that would be grounds for a racial discrimination lawsuit.

Alongside whiteness, there’s youth and thinness. Now 30, Ziff asks why that’s become the ideal. “Why do we have this perverse fascination with images of such young girls who are so small and inexperienced and really quite vulnerable?”

It’s hard to ignore the fact that fashion employers’ economic interest in a compliant, young, powerless workforce—a workforce that rarely even eats—happens to match their taste in what is fashionable.

“If women started modeling at 25 the whole industry would be different and nobody would boss models around!” wrote a commenter on the Model Alliance website.

Ziff predicted that if models had more power, they themselves would change the kind of images we see—for starters they’d be older, healthier, and more racially diverse. And that would decrease the intense appearance pressure on all women. On International Women’s Day, that would be a reason to celebrate.