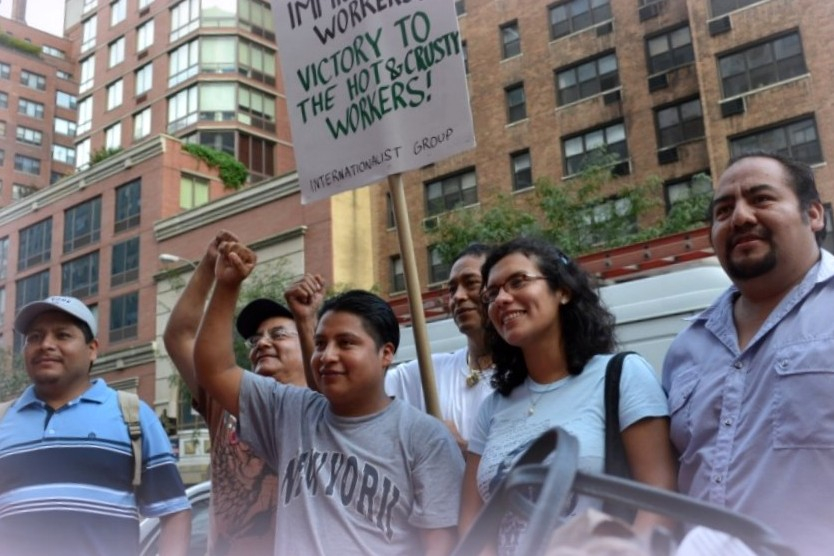 Workers and activists gathered outside the Hot and Crusty store on 63rd Street in New York City to celebrate their decisive victory after a yearlong organizing drive that included a sit-in by Occupy Wall Street allies and a 55-day continuous picket. Photo: Laundry Workers Center.

Employees of the Hot and Crusty restaurant in Manhattan have signed a groundbreaking first contract that gives their union control over who the bakery hires.

Workers and activists gathered outside the 63rd Street store to celebrate their decisive victory after a yearlong organizing drive that included a sit-in by Occupy Wall Street allies and a 55-day continuous picket.

Before giving in, the store’s current and previous owners had tried a barrage of anti-union tactics—closing the business, selling it, and threatening to investigate workers’ immigration status—but failed to shut down the campaign. The win is a shot in the arm for immigrant workers in similar campaigns at several small employers around New York City.

“We couldn’t have done it without you,” Hot and Crusty employee Mahoma Lopez told the crowd.

The Hot, Crusty Road to a Union

Two months later, the Hot and Crusty workers went public with their demand for recognition of their independent union. They also filed a wage-and-hour claim against then-owner 63rd Street Bagel Cafe.

After the workers won a certification election in May, making their union official, the owner settled the wage-and-hour case. Workers looked forward to back pay and better conditions.

But the fight wasn’t over. As the union began negotiating its first contract, 63rd Street Bagel Cafe unexpectedly gave 10 days’ notice that the store would close.

“They claimed they were going out of business,” said Ben Dictor, a co-founder of the LWC and a law graduate at the firm representing the union.

The restaurant has a great location in a wealthy neighborhood. The closure was clearly intended to put the newly formed union out on the street.

Union supporters fought back with a sit-in on August 31, where six Occupy activists were arrested. And the workers launched a daily picket that would last almost two months.

By the second week of continuous protest, investors David Kay and Anthony Illuzzi had acquired the store from 63rd Street Bagel Cafe and contacted the union to resume negotiations. By this time the landlord was reluctant to renew the lease, so the union first had to bargain with the building owner to keep the store open.

When the new bosses came to the table, they were “adversarial,” Dictor said. They offered to bring the workers back to work promptly, but only if they would abandon their demand for a hiring hall.

But workers held out for—and ultimately won—the hiring hall, meaning the union will control who is hired to work at the store. The idea is to keep management from stacking the work force with anti-union hires, who could try to decertify the union in three years when the contract expires.

“We’re trying to prevent the membership from being diluted,” Dictor said.

They also won paid vacation, sick days, seniority rights, and wage increases, none of which the employees enjoyed before forming the union. Gretel Areco, a union activist fired earlier this year, will be rehired. The store is scheduled to reopen December 17.

‘You Too Can Win’

The Hot and Crusty contract win is a hopeful sign for immigrant labor across the city.

Or in English: “Workers of New York: We did it at Hot and Crusty! You too can win. Organize!”

The intimidation factor makes immigrants especially vulnerable to sub-minimum wages and other workplace abuses. Employers often use threats of investigation and deportation to clamp down on organizing efforts.

“New York City is the restaurant capital of the world, and it runs on super-exploited immigrant labor,” said Sandor John of the City University’s Professional Staff Congress. “This is a victory for every single worker in the city.”

Christine Williams of Transport Workers Local 100 said the campaign heralds a wave of organizing among immigrant workers in similarly precarious jobs across the city.

At the Sunny Day Car Wash in the Bronx, workers seeking to affiliate with the Retail Wholesale union (RWDSU) struck November 6, demanding repayment for three weeks of lost wages. The Daily News reported their hourly wage at just $5.50. The community organization New York Communities for Change has partnered with the union to build the campaign.

And at the Golden Farms grocery store in Brooklyn, workers are still agitating for back pay and a union contract, after winning a certification election with RWDSU and the help of NYCC. Some of the grocers came out to celebrate with the Hot and Crusty workers, who have walked their picket lines, too. Before they unionized, Golden Farms workers charged, the store was paying them just $400 for a work week of over 70 hours.

The Laundry Workers Center is already helping workers organize at another store under the same ownership as Hot and Crusty, the Pizza Bagel and Café on 14th Street, Aran said. “And we are organizing other places,” he added, “but it is underground and we cannot say.”

Andrew Elrod is an undergraduate at New York University. He covers labor for the student blog NYULocal.

This article has been revised to correct errors in the original version.

Related
Inside the Alabama Amazon Union Drive: An Interview with the Lead Organizer »
The Grocery Companies Denied Us Hazard Pay—So We Went Over Their Heads »
Dispatch from Alabama: The Biggest Amazon Union Drive Yet »
Viewpoint: Don’t Count on New York Unions to Stop the Cuts »
With City's Economic Future in Doubt, Can New York Unions Stop the Cuts? »