A Bingo card is a fun way to encourage your co-workers not to take those predictable anti-worker talking points too seriously. Photo: elizaIO, CC BY-SA 2.0, cropped from original

Amazon’s anti-union campaign in its Bessemer, Alabama, warehouse shined a national spotlight on the tactics that companies deploy to fight union drives. Below, a newspaper reporter explains how he and his co-workers exposed management’s routine with a humorous tool: a Bingo card. Download it at nyguild.org/bingocard or create your own version and randomize the layout on a free bingo card generator website such as bingobaker.com. —Eds.

After a long underground organizing campaign, my colleagues and I—the reporters, photographers/videographers, clerks, planners, and multimedia staff at the The Record, The Daily Record, and the New Jersey Herald—announced on February 10 we had formed the Record Guild and joined the NewsGuild of New York.

Gannett, the parent company of the three New Jersey papers, refused to voluntarily recognize our union and launched an anti-union campaign.

We were prepared. We had been anticipating that management would call us in for captive-audience meetings, where we would be forced to listen to tired anti-worker talking points. Bosses always rely on the same tricks.

Anti-union bingo is a classic. Online you can find many examples from recent union drives by, for instance, charter school teachers, orchestra musicians, museum staff, and nonprofit employees.

Many elements are universal, while others may be specific to your workplace ("Teacher unions are bad for kids") or the moment ("If it weren't for Covid...").

Here's a nice generic one that produces a new arrangement every time you refresh the page—so not everyone gets a BINGO when the CEO cries.

In preparing for predictable anti-worker rhetoric, we decided to make a game out of it. The day we went public we circulated an anti-union Bingo card and told everyone, “If you are forced into a meeting with an editor [i.e. management], bring it out; you might get Bingo!”

Gannett made good on our prediction. Our entire bargaining unit was summoned for a digital captive-audience meeting, where we listened to a 40-minute anti-union monologue from the executive editor for the three newspapers.

We reminded everyone to get their cards ready. We weren’t able to talk back in the meeting, because we were all muted and the editor took no questions, so instead we encouraged everyone to join a private chat on our phones so we could coordinate tactful questions and responses as needed.

It was hilarious how quickly some of us were able to mark off multiple squares. By the end of the meeting, we had a bingo from at least one member of the unit.

The game may be a bit corny, but it was fun and effective in demonstrating to everyone how insincere management’s arguments are, and it inoculated everyone against management’s plays for sympathy. It’s hard for the bosses to seem sincere when we’ve predicted everything they say.

Organizing a union is about building power in the workplace. To stop us from uniting together, employers try to sow fear, uncertainty, and doubt.

The Bingo card exposes the truth: management is being coached to say these things, using a tired anti-union playbook, and they are hitting all the same talking points, just like the union predicted. It’s a really effective inoculation; when our co-workers heard what management said, it took all the impact out of it.

Terrence T. McDonald is a political reporter and NewsGuild organizing committee member at The Record. 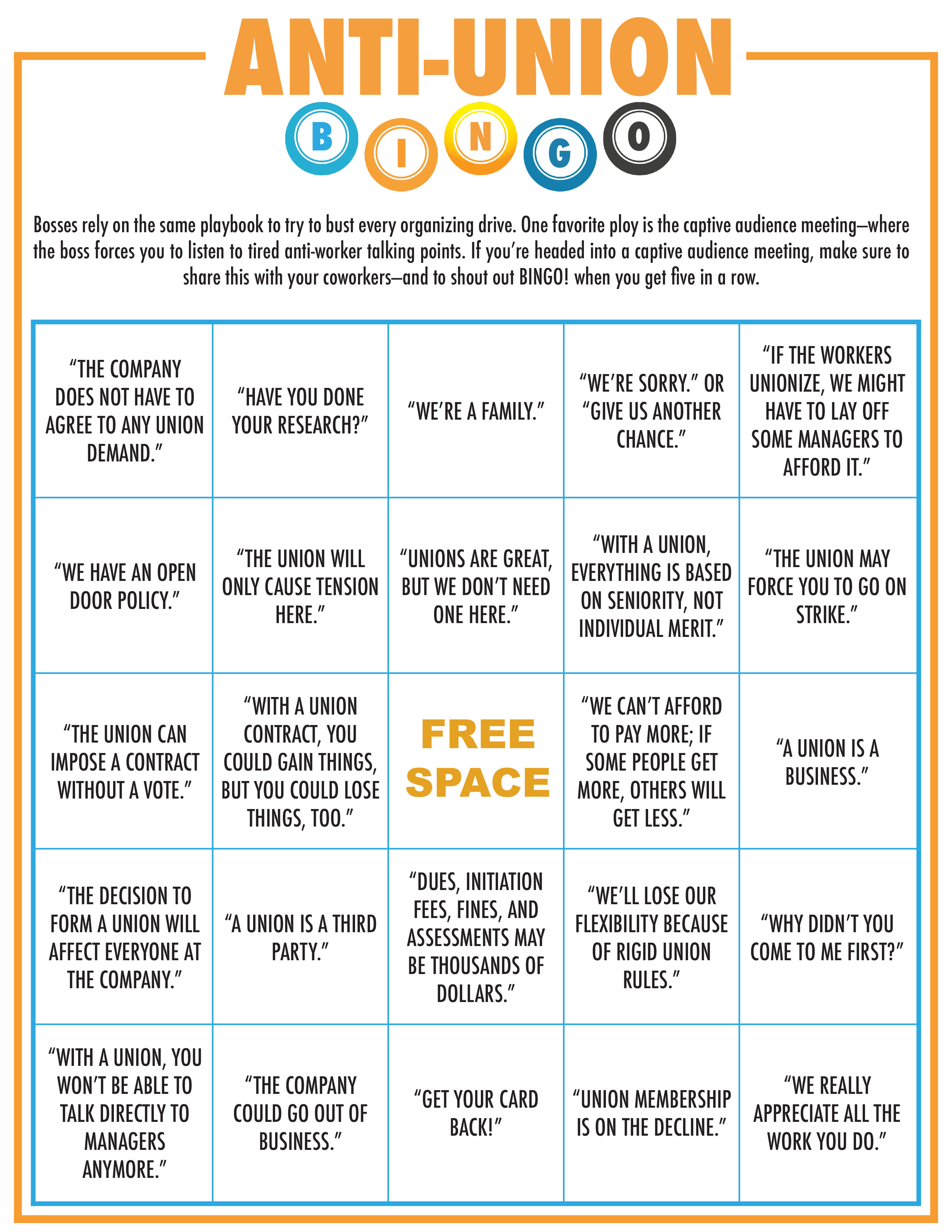 NewsGuild of New York, CWA
A version of this article appeared in Labor Notes #506. Don't miss an issue, subscribe today.
Related
Viewpoint: The NLRB is Underfunded and Understaffed—And That’s a Big Threat to the Current Organizing Wave »
A New Sense of Possibility: Starbucks and Amazon Wins Inspire Organizing at Trader Joe's, REI, Target, and Apple »
The Sign Says It All: How Unions Can Stop Employers from Crying Poor »
Deep South Baristas Strike Starbucks »
‘You Have to Be Very Persistent’: Lessons from the Starbucks Union in Chile »