How Los Angeles Teachers Built Up Our Courage to Strike 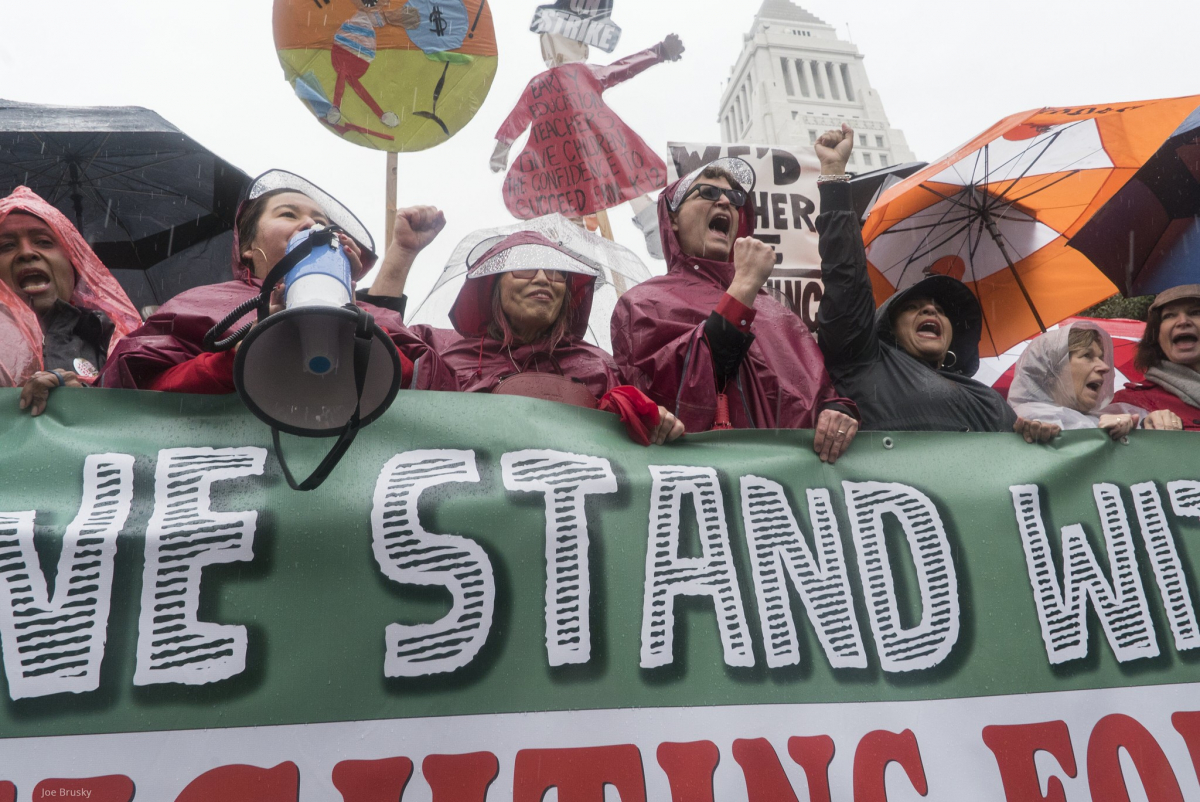 For most members, this was their first time on strike. We wanted to get the answers out early. Photo: UTLA

Teachers in Los Angeles struck and won last January. In the months leading up to the strike, how did we overcome our fears and the school district’s intimidation tactics?

United Teachers Los Angeles (UTLA) has 34,000 members at 900 schools spread across eight areas of the city, each with its own area meetings. Here’s what we did:

For most members, this was their first time on strike. We knew they would have lots of questions about the risks, the practicalities, and what the experience would be like. We wanted to get the answers out early—before the district started spreading misinformation and stoking fear.

Even before the August 2018 strike vote, at our big leadership conference in July, chapter leaders from each school received a thorough Strike Handbook. It covered:

The strike vote made the prospect of a strike feel real. Eighty-five percent of members cast ballots, and 98 percent of those voted yes. Everyone could see we were serious.

That’s when we started to hear from a handful of members who said they were not going out, sometimes because they couldn’t afford to lose pay, or were on probation, or were close to retirement. When I visited schools, people would corner me to say, “I’m a single mom and I just can’t afford to go on strike.”

The most important thing was to listen. I would hear the person out and validate their concerns. But I also would frame the choice: what it meant for us to make the sacrifice to strike, and what would happen if we didn’t.

I would tell them, “We totally understand your concerns. We don’t make enough, and there is a lot of financial strain. That’s why we’re going on strike! Not only for the salary, but also to build power for the things we need as educators.”

Warn members about the employer’s tactics.

We warned members about FUD: how the district would use fear, uncertainty, and doubt against us.

This is a tactic that has been used as far back as 1920. FUD is a disinformation strategy used in sales, marketing, public relations, politics, cults, and propaganda. The idea is to disseminate dubious or false information to make people fearful.

Talking about FUD worked beautifully to inoculate our members against the district’s disinformation campaign. We made sure every school had activists prepared to allay fears with facts and to help their co-workers interpret why the district was resorting to such tactics.

To build trust, be frank.

When our reform slate, Union Power, came into office five years ago, we were clear that we were going to tell members how things really were. They might not like what we had to say, but we were going to be frank.

That made a difference. Over time, we built trust. So when the district started spreading lies, members believed us.

We put a big emphasis on one-on-one conversations. That went not only for the officers like me, but for all the activists, like the chapter chairs at each school and the Contract Action Team members. Hearing back from many members all the time helped us anticipate the concerns.

The district put out a memo that educators weren’t allowed to pass out information about the strike to parents nor to talk to parents at back-to-school night in the fall.

That really got people mad. We came right back with our own memo from union lawyers saying that members had free speech rights to leaflet and talk with parents except during instructional time. They cited a case where a judge had upheld teachers’ right to bring sad-face balloons to back-to-school night. Those legal facts did a lot to allay people’s fears.

Another example: since substitute teachers are members of our local, the district put out a call for subs from other districts, offering them $500 a day to work during our strike. Man, were the substitutes mad! Strikebreakers were going to get paid more than they were. It was insulting.

We were able to circulate that kind of information quickly because we had a robust communication system. We were in touch at least twice a week with all the chapter chairs, the elected leaders at each school. Each chapter chair was in close touch with their school’s Contract Action Team—one activist for every 10 members.

We also used email, social media, phone calls, and robo-calls to get information out. In less than a year, we expanded our Facebook following from 5,000 to 80,000. Some parents initiated their own Facebook group to dispel the misinformation the district put out to parents, including a scare campaign on Spanish-language media to pressure families to send kids to school during the strike. We got good press coverage too.

But our most essential communication tool was the Contract Action Team—our network of contacts in every worksite.

My personal focus was on the health and human service professionals—5,000 people in 60 job categories such as nurses, librarians, mental health professionals, and speech and language specialists.

People in these jobs had often felt detached from the union, complaining that UTLA was so big it didn’t care about the little groups. Some teachers didn’t even know they were in the same union as nurses.

We decided as a negotiations theme to make sure we were demanding something for everyone—for instance, a nurse in every school, more counselors and librarians. Members who had previously felt overlooked saw the strike spotlighting their important work. And even though we didn’t win everything we wanted, they came out of it feeling much closer to the union.

Get all the leaders together.

Every year we meet with all the chapter leaders for a three-day leadership conference in the summer, and then again in December before the holiday break ends. It’s been a great way to bring leaders together on union-wide campaigns and school-site issues. For instance, that’s where we passed out our “shield against racism” protest signs when Trump was about to be inaugurated.

On the eve of the strike, the meeting was huge—1,000 people. The strike had been delayed repeatedly and people were itching to go. The feeling was “Let’s do this!”

The district had just come out with another false memo threatening special education teachers that they couldn’t strike because of federal special ed mandates. We talked about it at the meeting, and special ed teachers were livid. They knew the district didn’t care about their need for resources or smaller classes for our most vulnerable students. So their reaction was, “Now for sure we’re going to get every special ed teacher to go on strike!”

By the time we finally walked out on January 14, members were determined. Across the city we had 95-98 percent participation on the picket lines.

We prepared our members to put themselves on the line and to understand that our power was in our collective action, not in politicians, the billionaires, or the charter school industry. When I think about what we were able to instill—it was the opposite of FUD. Our strike gave members hope and clarity about what we were fighting for.

Arlene Inouye is the secretary and bargaining chair of United Teachers Los Angeles.

Related
As Omicron Rages, Teachers and Students Fight for Safety Measures in Chicago and Elsewhere »
Teachers Strike against a ‘Heartless’ School Board in Biden’s Hometown »
How Oakland Teachers Took Control of Our Return to School »
Jordanian Teachers Union Leaves Behind Legacy of Wins »
Pandemic Discrimination Against Asian Americans Has Long Roots »