‘Employee Engagement’ No Substitute for a Union at VW 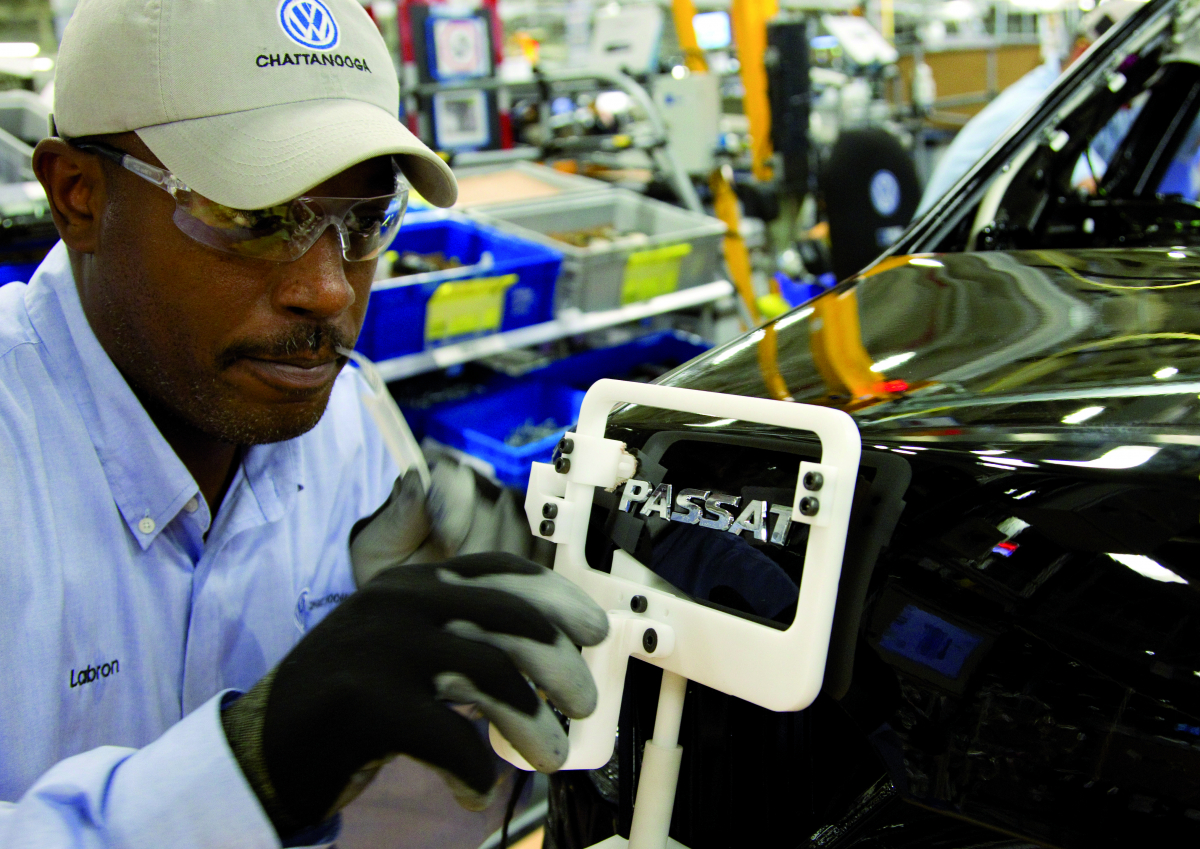 There’s no bargaining in Volkswagen’s new policy. On closer inspection, it looks more like something anti-union forces have been angling to try. In fact, it's suspiciously similar to what Tennessee legislators imposed on teachers. Photo: Volkswagen Nederland.

What should we make of the latest twist at the Chattanooga, Tennessee, Volkswagen plant?

Management announced in November that it will recognize employee organizations with as low as 15 percent membership. Some activists, including in the pages of Labor Notes, have long called for bargaining rights for non-majority, members-only unions.

But hold your applause: there’s no bargaining in VW’s new policy. On closer inspection, it looks more like something anti-union forces have been angling to try for years. And in fact, it’s suspiciously similar to what the state’s Republican-dominated legislature in 2011 imposed on Tennessee teachers.

VW’s new “engagement policy” sets up a process for unions to demonstrate 15, 30, or 45 percent membership in the plant. Once they do, they can hold member meetings on-premises and meet regularly with management.

The perks vary by level: with 15 percent your group can meet with Human Resources once a month. With 30 percent you can meet with a plant executive quarterly, bring outside representatives to monthly in-plant meetings, and have your own bulletin board.

With 45 percent you can meet biweekly with HR and monthly with the plant’s executive committee, and hold meetings on-site as often as you reasonably need to.

It’s not clear how these conversations with management will work, or what topics they’ll cover. But one point on which the policy is firm: this won’t be collective bargaining.

“They never give you a percent where you can actually be sole bargainer. It’s not laid out,” said Colby Curry, who works in assembly, on the door line. “Monthly meetings, that’s a step in the right direction—don’t get me wrong.

“But I’m a union supporter, so I’m looking to be sole bargainer… You can’t actually bargain on behalf of workers with 45 percent.”

After falling short in a February election, in July the UAW formed Local 42 and started signing up members anyway. Now it says it has a majority. If the company doesn’t recognize the union on that basis, presumably it could pursue another election.

Before the election, the plan UAW was pursuing—with VW’s tacit support—was first to unionize, then to bargain a contract to include a works council, the German system of labor-management cooperation already used in every other big VW plant around the globe.

Under U.S. labor law, the boss can’t just establish a works council. It has to be bargained with a union—otherwise you risk an employer-dominated system where workers can’t actually speak their minds, for fear of retaliation.

It’s not clear whether VW is hoping this quasi-recognition of a union will be enough to allow it to set up the works council.

Pro-employer lobbyists and right-wing politicians have long flirted with legalizing versions of “employee involvement” programs for non-union workplaces. In 1995 they got Congress to pass the TEAM Act, which would have legalized such committees, but President Bill Clinton vetoed it.

Tennessee Senator Bob Corker, an outspoken Republican opponent of the union drive, said in July he was considering legislation to try again to legalize works councils without unions.

Employers do get away with non-union committees that steer clear of wages and benefits, focusing on softer issues like “quality” and how to speed up production. In fact, that’s one of the hallmarks of the “lean production” approach that Volkswagen is now touting, as it nears its goal of becoming the world’s biggest automaker.

When Tennessee Republicans won a super-majority in the state legislature in 2011, they lost no time targeting teachers—the biggest union in the state, and the only public employees who had collective bargaining rights.

As in other states, legislators took those rights away. But in Tennessee they did something unusual. “They didn’t just outlaw collective bargaining, they replaced it with something new,” said Chris Brooks, an organizer for the Tennessee Education Association.

Instead of negotiations, teachers would now participate in something called “collaborative conferencing.” The subjects were limited to certain narrow topics—salary and working conditions, but not seniority, evaluations, or merit pay—and the results would be memorandums of understanding, not enforceable agreements.

The most unusual part: Instead of one union exclusively representing teachers, the workers’ side of the table can be a panel of seven people, perhaps representing different organizations. Workers vote among the organizations every three years. For every 15 percent of votes a group gets, it sends one person to conferencing.

Who else might workers vote for, besides TEA? “Another organization had been created, working hand-in-glove with [groups like the National Right to Work Foundation and the American Legislative Exchange Council] and the Republican caucus,” Brooks says: “the Professional Educators of Tennessee.”

PET presents itself as a provider of services, without the messy politics people might associate with unions. “They drag it down into a culture war,” Brooks said. “It devolves the conversation to partisan electoral politics, the choice for a Democrat or a Republican union.”

PET doesn’t actually provide a good service, of course. Brooks says the group has little staff presence in the schools. “They’re basically lobbyists who go fight for vouchers, then hide it from their base.” Nonetheless, he said, it has hurt TEA.

So the similar 15 percent thresholds in the VW policy caught his eye. He worries anti-union crusaders in other states and nationally will follow a similar approach:

“The next step after Right to Work? I think this is it. Getting culture warriors in the workplace to give money to organizations that will actually undermine their economic interests on the job.”

In the VW plant, a rival anti-union “union” called the American Council of Employees—a rebranded version of the group that campaigned for a “no” vote on the union—says it’s gathering signatures to seek recognition.

During the union election campaign, the vote-no group raised $100,000 from business and anti-union forces, its lawyer told Reuters. The same lawyer now speaks for ACE.

“There’s no proof of where their current funding is coming from, per se,” said Byron Spencer, another pro-union worker on the door line at the VW plant. “But they’ve rented a really nice piece of real estate near the plant, an old mansion that’s now being used as commercial office space. It’s been on the market for like $1 million.”

Meanwhile, Local 42 has elected a plant president, is holding meetings, and is hashing out the composition of its temporary bargaining committee—assuming it will get there eventually. Curry and Spencer say the pro-union majority is holding steady.

There are plenty of issues for a union to address in the plant. One widespread complaint, Curry said, is shifts that rotate, so you’re working days one week, nights the next. It’s hard to get enough sleep.

“Running like that for long, it wears you down throughout the week,” he said. “Luckily I’m young, I can deal with it, but that’s one of my main concerns. I don’t care if I’m working first shift or third shift as long as it’s consistent.”

Another hot topic, Spencer says: “The scuttlebutt around the plant is that they’re going to contract out the logistics jobs.” He estimates there are 300-400 of these jobs, delivering parts to the line. The ones already contracted out pay only about $11 an hour—compared to $15-20 for directly-employed workers. Contracting out the rest would be “a horrific thing,” he said.

But Spencer says the union’s focus for now is on “getting recognized and dealing with issues through collective bargaining. There are no real plans for any direct action.”

Alexandra Bradbury is the editor of Labor Notes.al@labornotes.org
Related
Who Corrupted the Auto Union? Criminal Employers Did »
Letters: Volkswagen and the United Auto Workers »
Volkswagen Declares Mission Accomplished »
Beware of the 'Easy' Way »
Why the UAW Lost Again in Chattanooga »