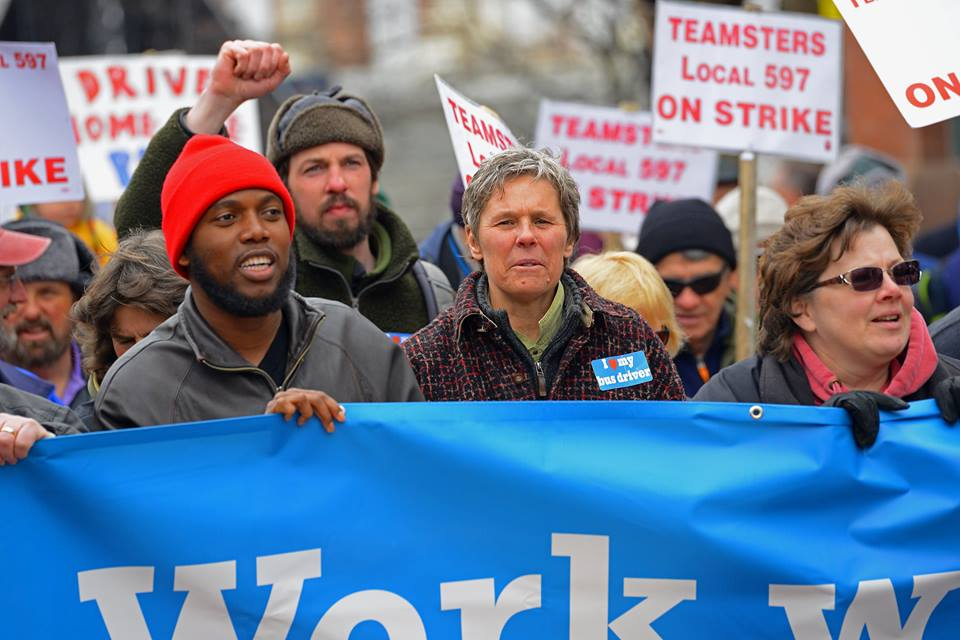 An 18-day bus drivers’ strike in Burlington, Vermont, ended in a win April 3 when drivers ratified a new contract 53-6.

Strikes are rare these days, and fewer still result in victories—so why was this one different? What generated public support for the strike, despite management’s aggressive plan to blame drivers for the loss of bus service for nearly three weeks?

This strike succeeded through a powerful combination of workers organizing on the job and organized community solidarity, the roots of which go back to at least 2009.

In the face of aggressive management and worsening working conditions, and dissatisfied with the response of their union, Teamsters Local 597, some drivers began to meet as the Sunday Morning Breakfast Club. They reached out to Teamsters for a Democratic Union in 2009 as they were getting ready for contract negotiations.

Through TDU they held workshops on member-to-member organizing and contract campaigns.

According to driver Jim Fouts, “When I first came here the union was weak, because it was a business-as-usual union. Then some activists started saying, ‘This is wrong. We can vote on things. This is supposed to be a democracy.’ And really it was a bottom-up movement to change our union.”

Their first success was winning the right to elect stewards and participating as equals with the Teamsters business agent on the bargaining team.

Members didn’t win the contract they wanted the first time, but they got organized, gained experience, broadened their leadership team, and built relationships with other labor activists and the Vermont Workers Center. That was the rehearsal for the current struggle, where rank-and-file organizing and community outreach came together in a big way.

By 2014 years of harassment by the Chittenden County Transit Authority (CCTA), forced-overtime shift spreads of up to 15 hours (where drivers work in the morning and afternoon-evening with unpaid hours in between), and the threat of replacing full-time jobs with part-time ones had created a toxic work environment. Drivers said the fatiguing long shifts were unsafe.

Management stonewalled negotiations for 10 months (the contract expired last June), refusing to bargain seriously over drivers’ demands for safe shifts and fair discipline procedures and even demanding to lengthen the “normal” working day from a 12.5-hour spread to 13.5.

“We have been swallowing this pain for the last 10 years. We cannot live in this hostile environment,” said driver Noor Ibrahim.

From the relationships built in the previous contract campaign, supporters knew the drivers were ready to make a fight. That confidence inspired community members and labor activists to form an energetic Committee to Support the CCTA Bus Drivers.

In February drivers voted to reject the company’s offer and authorize a strike.

The Committee made driver fatigue and public safety the issue. Driver Rob Slingerland promised, “We will not let the public down by driving under unsafe conditions. Driver fatigue is a leading factor in accidents in the transit industry.”

The Committee coordinated dropping 5,000 leaflets door to door and on buses the weekend before the strike, put out 500 lawn signs paid for by the AFL-CIO, scheduled “Invite a Driver” informational meetings, set up public forums, spoke out at CCTA commissioners meetings, organized rallies, marches, and daily pickets with up to 200 participants, and produced press releases, radio shows, video, and social media.

There was no discussion of the drivers’ issues on the Teamster Local 597 website or in Teamster press statements. The local’s top official even asked other unions not to publicly comment about the dispute, and especially not to mention public safety. But drivers maintained their own website, and supporters created a Facebook page, issued press releases, and made their own video.

CCTA and corporate-friendly politicians tried unsuccessfully to whip up public resentment against “greedy union drivers,” but the driver-community alliance managed instead to put “predatory management” on trial.

On the strike’s first day, Burlington High School students, usually dependent on the buses to get to school, turned out on the picket line and then marched miles, accompanied by their bus drivers, to school.

A good list of Burlington-area unions took the initiative to support the drivers on the picket lines, with solidarity statements, and with funds, although Teamsters 597 officials had not authorized support. These included nurses, state employees, university professors, teachers, United Electrical Workers, and the Vermont Workers’ Center.

Soon they were joined by every vital element in the Vermont labor movement, student and environmental groups, the Vermont Progressive Party, and ultimately… Local 597, which organized the picket lines and paid out strike benefits.

Eight of the 14 members of Burlington’s City Council co-sponsored a resolution calling for binding arbitration—which at first confused many people. While the union rejected binding arbitration, it fell to the nurses’ union to issue a statement explaining why this was a strikebreaking maneuver.

When 150 chanting drivers and supporters packed the council’s March 26 meeting, the council retracted its call for binding arbitration and instead created a committee to review management’s labor practices.

Entering the third week on strike, union negotiators presented another “last best offer” from management, which drivers voted down 62- 0.

Finally, CCTA agreed to limit monitoring and unfair discipline, reduce forced overtime to 13.5 hours a day instead of 15, and maintain drivers’ split shifts at the current 12.5 hours. Though drivers conceded an increase from 13 to 15 part-time drivers, language prevents CCTA from using retirement or termination to reduce the entire bargaining unit slowly to part-time status.

In the aftermath, the “troublemakers wing” of the Vermont labor movement is growing. A citizens group that includes drivers, Vermonters United for Public Transportation, has started up, with a focus on both optimal working conditions for drivers and better transportation options for citizens.

The support committee has transformed itself into an ongoing Solidarity Committee and is planning a Labor Notes Troublemakers School to continue to build new leaders.

Ellen David Friedman is a retired organizer for Vermont NEA and a member of the Labor Notes Policy Committee.

A version of this article appeared in Labor Notes #422. Don't miss an issue, subscribe today.
Related
No One Else Was Going To, So These Teamsters Saved Their Own Pensions »
Silicon Valley Bus Drivers Restored Community Rides for Free—By Taking Matters into Their Own Hands »
In a Six-Day Strike, Bronx Produce Workers Doubled Their Raise and Inspired New York »
Opening the Door to a More Democratic UAW »
Auto Workers to Vote on Direct Elections »