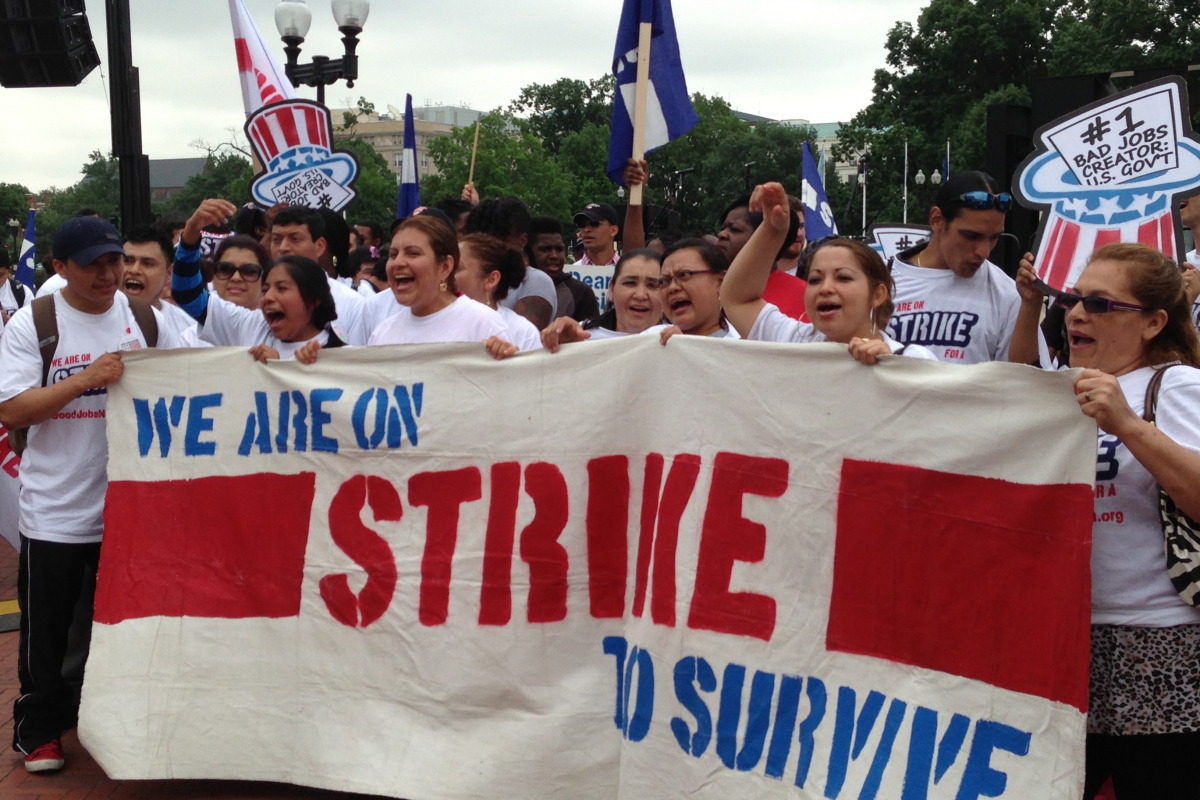 UPDATE: In his 2014 State of the Union address, President Obama announced plans to issue an executive order raising the minimum wage for future federal contracts to $10.10, a move that leaders of the Good Jobs Nation campaign see as a partial victory.

Out of all the low-wage workers who walked out on strike last year, one group has won a union. About 200 food service workers in the federally owned Smithsonian museums in Washington, D.C. were able to move from one-day strikes to union representation thanks to an unusual set of circumstances.

Frederick Turner, a utility worker at the American History Museum who has been in two unions before, participated in one-day walkouts last year through a campaign called Good Jobs Nation. Turner said he joined the strikes “to show my co-workers that they have the right to stand up for themselves.”

But the idea of joining a union didn’t come up until later, when UNITE HERE Local 23 found out Turner and his co-workers were employed by Compass Group. That was a stroke of good luck—because some Compass Group workers in other D.C. buildings already belonged to the local.

Nearly all food-service workers in the various Smithsonian museums in D.C. are hired by Compass Group, which runs contracted cafeterias all over the country.

Lead organizer Lauren Burke says Local 23 was supportive of the Good Jobs Nation strikes from the start, but got more involved when it became clear that many of the workers walking out were Compass employees.

Using its relationship with Compass, at the end of last year the local got management to agree to a “fair process” for union representation. “Fair process” is a phrase UNITE HERE often uses to describe management neutrality and either a vote or a card check.

“Having members in the company was part of the way we were able to leverage the company,” said Burke. She declined to give details, saying simply that “the energy really came out of Good Jobs Nation and the Fight for 15.”

Turner says he’s “still trying to convince” some of his co-workers of the value of a union. “There’s still a lot of people who have never been in a union,” he said. “They don’t understand how the union benefits the employees.”

As the Service Employees (SEIU) organized one-day strikes of fast food workers in cities across the country in the “Fight for 15” last year, the Change to Win federation organized similar actions in Washington, D.C. as the “Good Jobs Nation” campaign.

Contract workers at federal buildings throughout the capital walked out on multiple one-day strikes. Both food service workers and janitors, in locations from federally owned Union Station to the Smithsonian museums, they had one big thing in common: their employers had federal contracts, making the government their boss’s boss.

Another day, they marched and put on short street-theater skits, blocking the street outside the Air and Space Museum.

Workers targeted Obama, calling on him to issue an executive order granting them a “living wage” and benefits.

In an (unsuccessful) 2013 battle to raise D.C.’s minimum wage for large retailers, campaigners pegged a living wage at $12.50 per hour, but Good Jobs Nation has been careful not to mention a specific number. “Certainly more than they are making now,” said Paco Fabian, a spokesperson for the campaign.

CONTRACTING OUT IN D.C.

The federal government contracts out a lot of work all over the country, but the effects are felt particularly in the nation’s capital.

About 2 million low-wage workers are paid through U.S. tax dollars, according to a study by Demos. The Economic Policy Institute (EPI) found that employees of federal contractors are far more likely to earn poverty wages than those employed directly by the government.

“The outsourcing of government work through federal contracts is often done in the name of cost-saving,” EPI reports. But this “contracting out has a depressing effect on the incomes and labor standards of people who do work for the U.S. government.”

Local 23 went into negotiations for a first contract in January with about 15 workers at the table, including Turner. They hope to boost wages, health benefits, and protections for immigrants.

“It’s not just about getting more money,” said Turner. “It’s about being able to live your life instead of surviving.”

Meanwhile, food service workers at Union Station worked with Good Jobs Nation to file a complaint with the U.S. Department of Labor January 15, alleging “widespread wage theft and other violations of labor law.”

The successful unionization at the Smithsonian could push Good Jobs Nation toward strategically targeting other government contractors where there’s an “in,” as with Compass Group. But all signs point to a continued push for an executive order, an action Obama appears to be considering.

Fabian says Good Jobs Nation is “looking to expand to other places around the D.C. area” where it can get workers involved in its push for an executive order. Asked if we should expect more one-day strikes, he said only that there will be “lots of new tactics and old.”

Turner was more to-the-point on the prospect of future strikes. “If it comes down to it, and that’s what we have to do, then that’s what we’ll do,” he said.