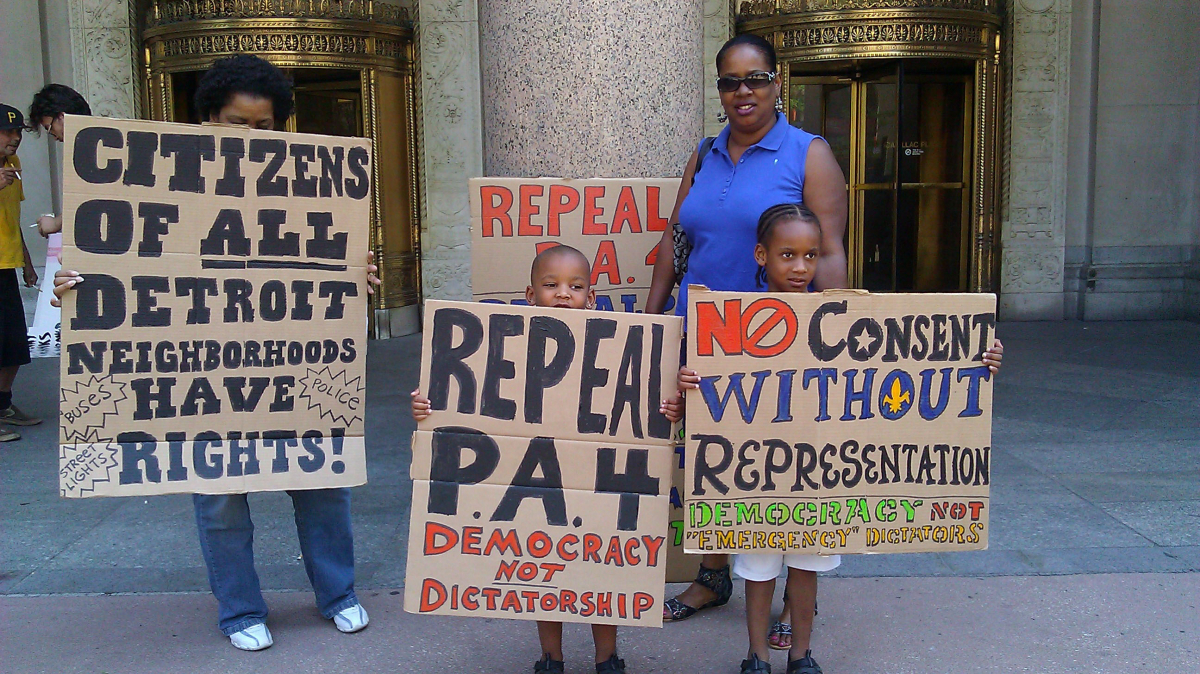 Detroit hit the Trifecta yesterday—the third in a series of body blows that politicians have landed on the city’s working people.

The Michigan legislature passed “right-to-work” in December and gave the governor the right to impose “emergency managers” on cities two days later. When Detroit’s emergency manager Kevyn Orr announced Chapter 9 bankruptcy Thursday, he was following a predicted trajectory that will lead to further impoverishment and privatization.

The bankruptcy will enable an appointed judge to impose further cuts to city expenses and to void union contracts. A prime target for cost-cutting is the pensions owed to 21,000 city retirees and 9,000 active workers. The city estimates its pensions are underfunded by $3.5 billion, and wants to reduce payments to both workers and the bondholders who have lent the city money over the years: equality of sacrifice.

Michael Mulholland, vice president of the city’s largest AFSCME local, said city workers are “in a state of somewhere between perplexion and total anger. Everything they’ve been promised, both contractually and kind of a social contract, is being pulled out from under them. It’s morally indefensible.”

Mulholland retired in February, after 29 and a half years in the Water Department. “I could have worked someplace else and made more money,” he said, “but I was told if I worked here I’d have a steady job and in my old age not be in poverty.”

The bankruptcy of Detroit, which now has fewer than 700,000 residents, is the largest city bankruptcy in U.S. history.

Orr sprung the hurry-up filing yesterday because union pension fund attorneys were scheduled to be in court on Monday, arguing for an injunction against bankruptcy.

The state constitution appears to protect public employee pensions: “The accrued financial benefits of each pension plan and retirement system of the state and its political subdivisions shall be a contractual obligation thereof and shall not be diminished or impaired thereby.”

But proponents of making city workers bite the bullet note that bankruptcy judges have wide latitude to break contracts.

Tag-Teaming with the Governor and the Banks

Pundits said other states and cities would look to Detroit as a template for how to manage ailing city budgets. A recent law in Rhode Island specifies that in a city bankruptcy, bondholders must be paid first, before pensioners.

Asked if the Michigan legislature could pass a similar law, Mulholland laughed. “If they proposed a law that Detroiters should all be shot,” he said, “some of them would get up at midnight to sign that one.” Governor Rick Snyder has guided the process of putting Detroit through a "consent decree," Orr's rule, and now the bankruptcy.

The Republican-dominated legislature has long been hostile to majority-black Detroit. In November 2012, the state’s voters passed a referendum that threw out a previous “emergency manager” law, which had been used almost exclusively to take over majority-black cities and school districts. A few weeks later the legislature simply passed the law again.

Although the law requires negotiations with affected parties before a city files for bankruptcy, Mulholland, who was in the talks, said, “It wasn’t negotiations, it was PowerPoint presentations about how bad the situation is.

“Orr wouldn’t answer AFSCME’s requests for negotiations, so they went and taped a letter to the door of his office.”

As an AFSCME member who had reached the top of the pay scale, Mulholland’s pension is $1,600 a month before health care contributions are taken out. He said exactly how much Orr intends to take from retirees has always been left vague, though union leaders were told health care would be slashed.

Two years ago, he said, city officials encouraged workers to retire right away. Now active workers are told to “relax, we’re going after the retirees.”

Local 207 is planning a demonstration in downtown Detroit July 25.

Orr touts the bankruptcy as a way to improve city services—which often, in the world he comes from, is code for privatization. Water, garbage pickup, an island park called Belle Isle, and the Detroit Institute of the Arts have all been mentioned as potential saleable items. “The only thing they’re going to ‘improve’ is somebody’s bottom line,” Mulholland predicted.

General Motors, which is headquartered downtown, said it wouldn't be affected by the bankruptcy. Apparently, with Snyder—who ran on his record as a businessman—in charge, business is going to be just fine.

Related
Troublemakers Schooled in Detroit and Philly »
Detroit Postal Workers Push to Dump DeJoy and His Ten-Year Plan »
Detroit Bus Drivers Win Protections Against Virus Through Strike »
GM Workers Ratify Contract Though 'Mixed at Best' »
GM Contract: 'Not What We Struck For' »