Terrorists? Arrest 'Em (Unless They're Walmart) 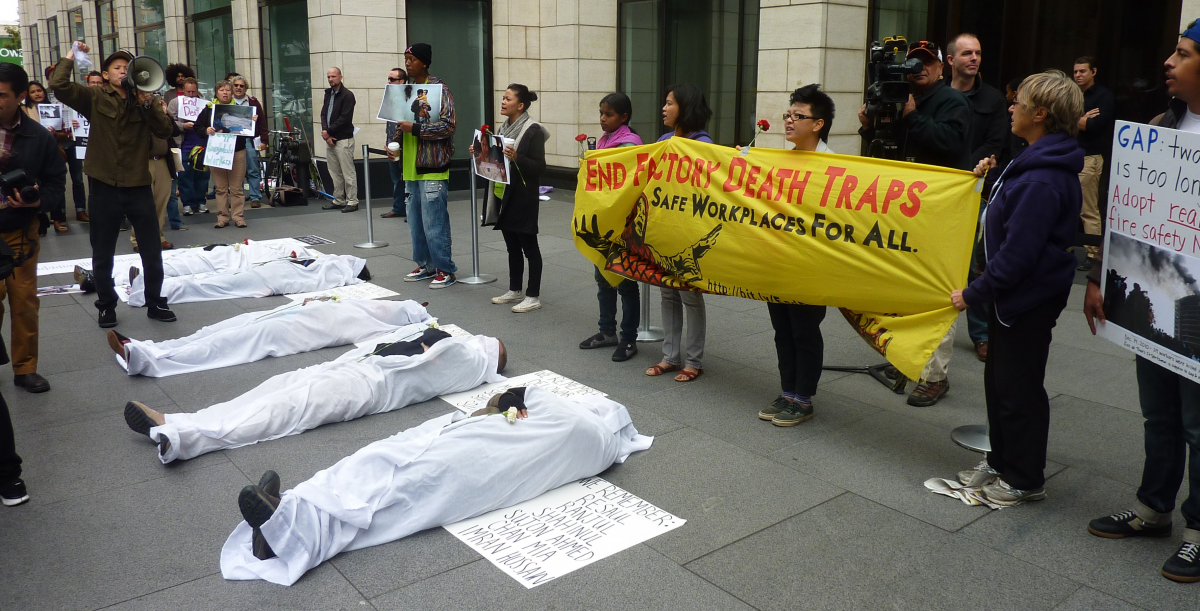 Workers wrapped in mock shrouds protested in San Francisco, decrying horrific inattention to safety by retailers like GAP and Walmart. Since 2006, close to 1,000 garment workers in Bangladesh have died in factory disasters at the retailers' suppliers. Photo: Marc Norton.

When terrorist bombers killed three people in Boston, the FBI moved heaven and earth to apprehend them. When suppliers to Walmart and other brands in Bangladesh killed more than 360 people April 24 in one of their garment factory death traps, the FBI sat on its hands. But those responsible—Walmart’s board of directors—are well known and could be easily apprehended.

On the very day of the Rana Plaza factory collapse, one of the survivors of a November 2012 fire at Tazreen Fashion, near Dhaka, Sumi Abedin, was in San Francisco. She and another former garment worker from Bangladesh, Kalpona Akter, had tickets to attend a gala fundraiser at the Fairmont Hotel for the Latino Community Foundation, which is led by Aida Alvarez, a prominent member of Walmart’s board.

Not surprisingly, the Foundation denied Abedin and Akter access to the fundraiser, along with other Walmart workers from the Bay Area and Southern California who’d planned to attend. Instead, they and their supporters rallied outside the Fairmont, demanding justice for Walmart workers all along the supply chain.

The Latino Community Foundation calls Walmart a “Corporate Champion.” Corporate Criminal would be more accurate. Why wasn’t the FBI at the Fairmont to question Alvarez about Walmart’s terrorism in Bangladesh?

The deaths at Rana Plaza are only the latest example of murder in the Walmart supply chain. It was only last November that 112 workers died in the Tazreen garment factory, where clothes were being sewn at sweatshop wages for Walmart. In the wake of that fire, the New York Times reported that Walmart’s director of ethical sourcing “played the lead role in blocking an effort… to improve their electrical and fire safety,” arguing that “it is not financially feasible for the brands to make such investments.”

Where is the FBI investigation of Walmart’s criminal conspiracy that resulted in the deaths at Tazreen?

Why hasn’t the FBI knocked on the door of Marissa Mayer, another member of Walmart’s board, who lives at the luxurious Four Seasons on Market Street in San Francisco? If the FBI and federal officials won’t pursue this investigation, maybe San Francisco’s District Attorney George Gascon, who has been big about fighting terrorism, should do something about the corporate criminals living in and hobnobbing about San Francisco.

The day after the fundraiser at the Fairmont, Abedin and Akter attended a large rally outside the GAP World Headquarters in San Francisco. GAP, like Walmart, profits from the sweatshop wages paid in garment factory death traps in Bangladesh and around the world. A number of workers wrapped in mock shrouds lay on the ground in front of GAP’s doorway.

Since 2006, close to 1,000 garment workers in Bangladesh have died while manufacturing clothes for companies like Walmart and GAP. The death toll keeps rising. When will law enforcement deal with these terrorists in our midst?

Marc Norton has been a rank-and-file member of UNITE HERE Local 2, the San Francisco hotel and restaurant workers union, since 1976. He is also a member of the Industrial Workers of the World (IWW). His website is www.MarcNorton.us.