NLRB Gridlock: One Step Back, Two Steps Further Back 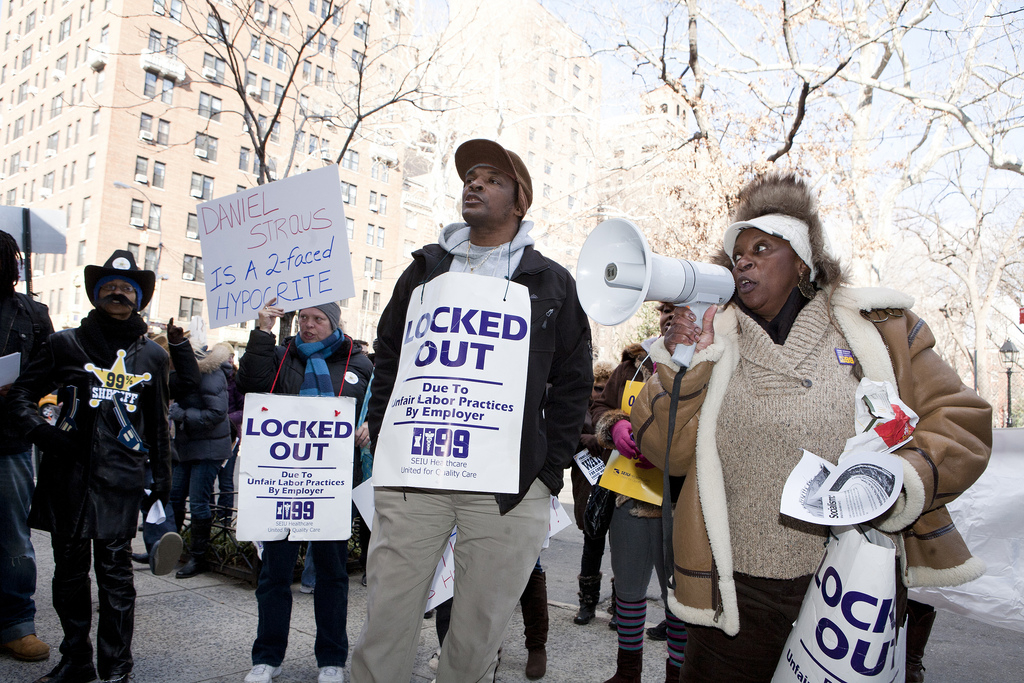 Connecticut nursing home workers may see justice delayed and denied once again as their scofflaw employer, HealthBridge, seeks one more legal run-around. A recent court ruling puts in jeopardy a year’s worth of NLRB actions across the country. Photo: Belinda Gallegos.

Two developments in 24 hours last month in Washington, D.C. seem to guarantee near-paralysis at the NLRB for the foreseeable future—at least when it comes to doing anything an employer objects to.

The first, on January 24, was the disappointing deal struck by leading Democrats in the Senate with their Republican counterparts: to put off any meaningful reform of the Senate’s filibuster rules for at least two years.

That means Senate Republicans, even though in the minority, can continue to block confirmation of President Obama’s nominees to the National Labor Relations Board and other agencies the Republicans despise, like the new Consumer Financial Protection Bureau, for as long as they have the political will to do so.

Then on January 25, the U.S. Court of Appeals for the D.C. Circuit overturned a routine NLRB unfair labor practice decision on the grounds that three members of the Board who participated in that decision had been unlawfully appointed by President Obama a year earlier, by way of invalid “recess appointments.”

Recess appointments, which are authorized by the U.S. Constitution, permit a president to make temporary appointments—which can last up to two years—to federal positions that ordinarily require Senate confirmation, if the appointments are made when the Senate is in recess.

Recess appointments have been regularly used by presidents of both parties, particularly when the opposition party blocks their nominees by filibustering. President George W. Bush, for example, made seven recess appointments to fill NLRB vacancies during his presidency.

The recent court decision, Noel Canning, started out as a fairly routine ruling by the NLRB. The Board said the company, a division of a Pepsi bottling franchise in Washington state, had committed an unfair labor practice when it reneged on its verbal agreement to terms for a new collective bargaining agreement with the Teamsters, and refused to sign the written agreement.

The decision throws two big monkey wrenches into the traditional role recess appointments play in the “checks and balances” between the White House and the Senate. First, the three judges unanimously interpreted the term “recess” narrowly, to mean only those periods that occur at the end of an official “session” of Congress, when the Senate breaks near the end of the calendar year. The traditional view has been that recess appointments can also be made during vacations and other “recesses” during the session.

Second, two members of the Court defined very narrowly the nature of the vacancies that can be filled by recess appointments, regardless of how the term “recess” is defined. They held that vacancies subject to recess appointments are only those that happen to open up during a recess, not vacancies that open up at any time but are still vacant at the time of a recess. This is a completely new reading of the term.

The upshot was that if the three members of the NLRB were not lawfully appointed, they could not be part of the three-member quorum required for the NLRB to conduct official business, like deciding unfair labor practice cases.

The three recess appointments, made in early January 2012, were Sharon Block, a Democrat, Terrence F. Flynn, a Republican, and Richard F. Griffin, a Democrat. Before last month's decision, Flynn had resigned from the Board, and that vacancy has not been filled. If the recess appointments of Block and Griffin were in fact unlawful, the NLRB would be left with only one member, Chairman Mark Gaston Pearce.

If the Democratic leadership in the Senate had stuck to their guns a day earlier and pushed through real filibuster reform, the fallout from the recent Court decision, while creating problems in the short run, could be overcome in the long run. The Senate could have confirmed President Obama’s NLRB nominees, so he would have little need to rely on recess appointments in the future.

Unfortunately, significant filibuster reform didn’t happen, so the NLRB will either be left powerless, without the quorum it needs to function for the foreseeable future, or President Obama will have to restrict his nominees to wishy-washy candidates acceptable to those very few Senate Republicans who might be willing to play ball with him. Or Senate Republicans might choose to block any nominations, no matter how moderate or even conservative they might be, in order to effectively shut down an agency they have no use for anyway.

On Its Way to the Supreme Court

Not all courts, however, agree with the D.C. Circuit’s very narrow interpretation of the President’s power to make recess appointments, and these disagreements among the lower courts are destined to be resolved by the Supreme Court. How the Supreme Court might come down on these issues is anybody’s guess.

In the meantime, something close to chaos may ensue in areas of labor relations traditionally regulated by the NLRB. While the D.C. Circuit’s decision is binding only in D.C., and the NLRB so far has vowed to continue its business as usual, employers unhappy with NLRB rulings against them always have the opportunity to appeal those cases to the D.C. Circuit, even if the unfair labor practice occurred somewhere else.

So far, only one employer, Noel Canning, has benefited from this recent court decision, but other employers are already racing to court. They are claiming that everything the NLRB has done in the last year, since President Obama made his three recess appointments, should be nullified.

HealthBridge employees who were expecting to go back to work this week may have to wait.

Another type of NLRB activity the recess appointments issue can stop in its tracks is rule-making. This is not a policy-making tool the NLRB uses often, but it has become more common in recent years. For example, in 2011, the Board issued rules requiring all employers covered by the National Labor Relations Act to post in their workplaces official notices informing their employees of their right to join unions and engage in other forms of concerted activity. (Employer challenges to these rules are still pending in various courts on other legal grounds, successfully blocking their implementation so far.)

But if employers don't like the outcomes of those unfair labor cases or the results of those representation elections, they have no worries. All they need to do is refuse to voluntarily comply, and then seek judicial review in the D.C. Circuit. Under Noel Canning, the NLRB will be powerless to compel compliance until the Board has a quorum of Senate-confirmed members.

Michael J. Goldberg is a professor at the Widener University School of Law in Wilmington, Delaware.

Related
Every Union Contract Right Now Should Be the Best Ever »
Southern Service Workers Launch a New Union »
How to Win NLRB Cases against Union-Busters »
New Leadership, New Direction in Major Midwest Teamsters Local »
Ahead of Halloween, Sysco Teamsters Give Corporate Ghouls the Heebie-Jeebies »