Climate Change Is Drowning Out ‘Jobs vs. Environment’ Debate 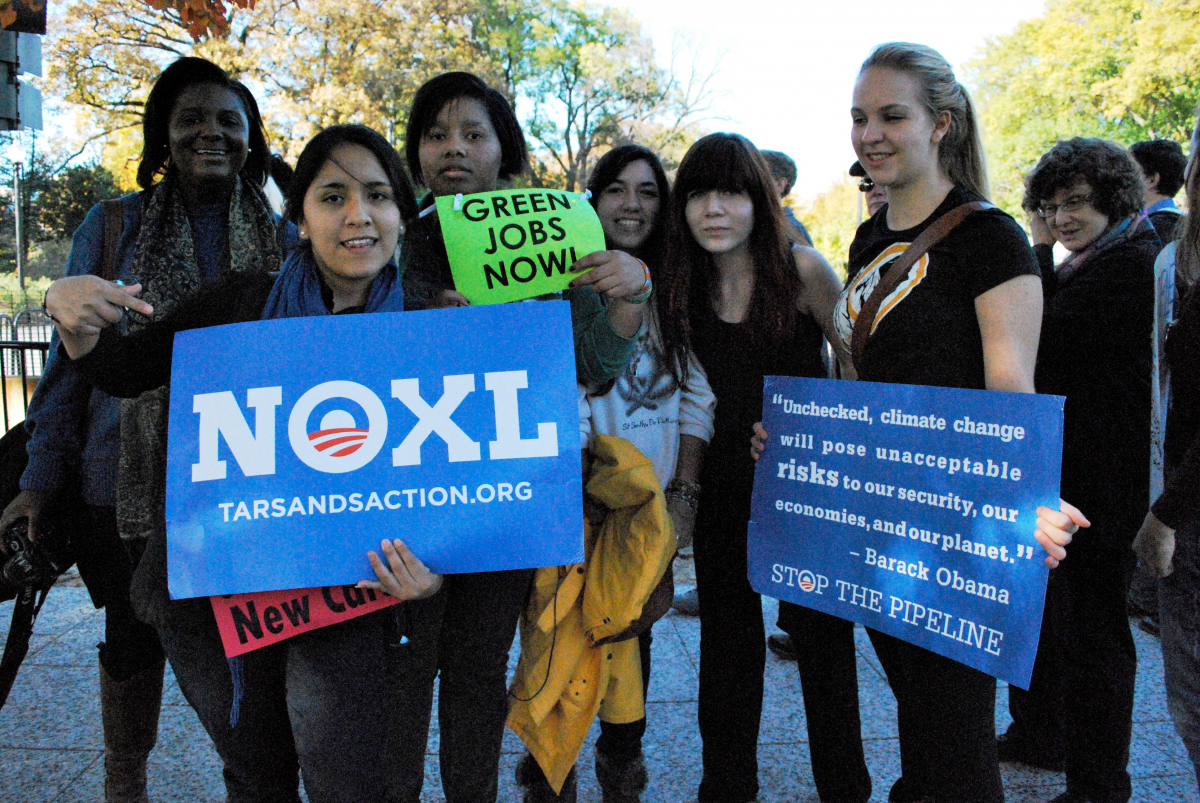 More unions are urging their members to join other climate change activists on February 17 in Washington, D.C. for a new round of demonstrations against the Keystone XL pipeline. It's evidence of a shift in the labor movement. Photo: Tar Sands Action.

The old argument that unions must choose between jobs and the environment is losing its grip, as climate change becomes more evident and more urgent. More unions than ever have signed up to join environmentalists for a demonstration in Washington, D.C. against the Keystone XL tar sands pipeline on Sunday.

It’s evidence of a sea change, at least among some unions, when it comes to global warming. Indeed, many are arguing that investment to prevent global warming is the real job-creator.

The Utility Workers, who run power plants, are calling for “a serious commitment to climate change legislation,” which they say will create two million good jobs.

And as the debate over TransCanada’s Keystone XL pipeline heats up again, the 120,000-member Communications, Energy, and Paperworkers union in Canada is opposing it more strongly than ever—even though the CEP represents 35,000 workers in oil, gas extraction, and refining, including oil patch workers in Alberta, the very workers who mine the tar sands (see box at right).

MEANWHILE, IN THE OIL PATCH

How does a union in the fossil fuel industry handle climate change?

In the largest Canadian energy union, the Communications, Energy and Paperworkers, convention delegates unanimously supported the 1997 Kyoto climate accord, an international agreement to limit carbon emissions. And the CEP has voted in every convention to oppose the Keystone XL.

“For many years our union stood almost by itself” in opposition to tar sands export pipelines, said CEP President David Coles at a recent conference on unions and global warming in New York.

Canada’s economy has shifted, the CEP and other Canadian unions like the Auto Workers argue, from adding value through manufacturing to exporting raw resources at great profit to owners, like an old-fashioned colony.

The resulting strength of the Canadian dollar has made manufactured exports more expensive to the rest of the world and caused Canada to lose 11 percent of its manufacturing jobs since 2008. Coles called the move to export even more tar sands bitumen a job-killer.

The jobs argument isn’t all, though. Even the 35,000 members who work directly with fossil fuels, Coles said, agree that “we cannot sustain the expansion of the carbon economy.”

His union has engaged members on energy and economic issues all along, he said. It sent a delegation to Fukushima, Japan, to learn about the nuclear reactor disaster there. Although CEP includes uranium miners, the union opposes nuclear power.

“You don’t have to tell an oil worker how rotten the employers are. They don’t trust them,” said Coles. In his union, there’s an understanding: “If the boss supports it, you’d better be nervous. We’re not all in this together; we have opposing interests.”

But, he said, when a society decides to make a change, it needs to set aside money for a “just transition” for workers, including training and relocation. Energy employers should pay a higher tax set aside for that purpose, he said.

In the U.S., investment in renewable energy creates more jobs than investment in capital-intensive fossil fuels. A University of California study showed that 5.65 jobs are created for every million dollars invested in solar energy, 5.70 in wind, and only 3.96 in coal.

A study of the 2009 stimulus package noted that investments in public transportation had created 31 percent more jobs, dollar for dollar, than those in new road construction.

Even the regulations long denounced by industry as job-destroying can turn out to be the opposite. The Environmental Protection Agency projected that new emissions standards it proposed in 2009 for coal power plants would create up to 31,000 construction jobs and 9,000 permanent utility jobs. But so far, the EPA has only applied new regulations to future plants.

The New York City workforce of 8,500 that the company locked out last summer in a dispute over pensions has been winnowed to 7,700, Duffy said.

He said the union has found power poles dating back to the 1930s, though the company is supposed to replace them every 50 years and charges rates that are supposed to pay for upgrading.

When a storm like Sandy wreaks havoc on an already weakened system, managers just say, “Whoops, look what the storm did,” Duffy said. Publicly owned power companies are better, he said, because private ones lobby against regulations requiring them to maintain equipment with appropriate staffing levels.

After many years of singing in harmony with their Big 3 employers against fuel efficiency, the Auto Workers union has changed tune, arguing that the recent 2012 regulations would create jobs.

In 2007 UAW’s previous president Ron Gettelfinger had complained about changes to CAFE, calling them “the least desirable option for addressing the problems of climate change and energy security.”

Shortly after King was elected in 2010, the UAW joined the BlueGreen Alliance, an effort to unite environmentalists and unions started by the Steelworkers and the Sierra Club in 2006. The Alliance now counts the Service Employees, Communications, Utility, Food and Commercial, Teachers (AFT), Plumbers, Amalgamated Transit, and Sheet Metal unions as members.

The BlueGreen Alliance calculated that the new CAFE standards would cut carbon emissions nearly in half for cars and light-duty trucks. The Alliance predicted that by 2030, when the standards have been fully implemented, they would create 50,000 jobs.

The promise of jobs in the fossil fuel industry has caused splits among unions. The BlueGreen Alliance lost the Laborers union in the first fight over the Keystone XL pipeline in 2011.

Hamstrung by disagreement among member unions, the coalition declined to take a stand. But the Laborers pulled out anyway, angry that other coalition members had opposed a project they hoped would employ their members.

Sometimes environmental initiatives ignore obvious allies in the working class. Members of the New York Taxi Workers Alliance drive the largest cab fleet in the country, with 100,000 vehicles. The workers generally lease the vehicles and pay for gas.

So it was good news for them when, under pressure from environmentalists, New York City announced that taxi garages would have to purchase hybrids, with far higher mileage and lower emissions.

The members supported the move and understand the stakes, said Bhairavi Desai, director of the Alliance. Many New York cabbies are from Bangladesh, a low-lying country susceptible to the flooding caused by higher oceans.

But the workers weren’t included in the debate, Desai said. “Workers could have been the face of the environmental agenda.”

As a result, when the garages sued the city, claiming the hybrids would be too expensive, the parties cut a deal that meant cab drivers themselves would have to pay more for the hybrid vehicles. The drivers, who were least able to afford it, ended up subsidizing a much larger social responsibility.

To make a sustainable alliance with organized cab drivers, environmentalists should have talked to the workers, not just their bosses, said Desai.

“Don’t make us choose between a middle-class existence and the air we breathe,” she said.

The Keystone XL would run 2,000 miles, from Alberta to Texas, carrying a corrosive slurry of raw bitumen to refineries on the Gulf Coast. Tar sands mining produces a dirty fuel with a large carbon footprint that must be heated to mine it and diluted with other fuel to pipe it. Pipeline spills are not uncommon.

In Texas, the refined fuel would likely be put on ships for export. Because the pipeline crosses an international border, it needs U.S. government approval.

TransCanada has projected 20,000 construction jobs on the pipeline, while the State Department has estimated 6,000. The company promised construction unions it would hire their members, leading the Laborers—with support from the Teamsters, Operating Engineers, and Plumbers (UA)—to lash out at two transit unions who spoke out against Keystone XL and for green jobs.

Observers said other unions were deterred from speaking out on the pipeline after the construction unions’ fierce criticism.

At one point the Laborers threatened to picket a U.S. talk by CEP President Coles.

Many climate activists rate the Keystone XL a hinge-point in the battle to lower carbon emissions. NASA climate scientist James Hansen says that exploitation of the tar sands “would make it implausible to stabilize the climate”; if tar sands are in the mix, “it’s essentially game over.”

With this in mind, making tar sands bitumen more difficult to mine and ship has become a top priority for U.S. climate activists, leading to 1,200 civil disobedience arrests at the White House in fall 2011. President (and then-candidate) Obama was convinced to delay the pipeline decision until after the election.

The Steelworkers, who helped found the BlueGreen Alliance and have argued actively for green jobs, didn’t take a position during the 2011 protests. The steel for the pipeline could be fabricated by members in the U.S. and Canada, although some of it had already been ordered from India.

Now the pipeline has returned to the front pages as the administration considers the issue again. The Communications Workers are urging members to attend the February 17 demonstration, which they call “the largest U.S. climate rally ever,” with the tagline, “Crippling drought. Devastating wildfires. Superstorm Sandy. Climate change is a real threat.”

And the 185,000-member National Nurses Union came out against the pipeline in early February, joining the Amalgamated Transit Union and the Transport Workers Union.

“It’s easy for us to take this position,” said Jill Furillo of the 37,000-member New York State Nurses Association. “Our members are on the front lines of seeing the effects of the environmental crisis.”

After Hurricane Sandy, New York nurses not only took care of those injured in the storm, they also evacuated patients from hospitals crippled by loss of electricity, carrying critically ill patients down dark stairwells when rising floodwaters wrecked elevators and backup generators.

Jenny Brown was a co-editor of Labor Notes.jenny@labornotes.org
Related
VIDEO: Health Care Strikes During a Pandemic »
Opening the Door to a More Democratic UAW »
Auto Workers to Vote on Direct Elections »
General Motors Returns to Oshawa—But Offers Only Second-Tier Jobs in a ‘Pop-Up’ Plant »
Viewpoint: As the West Coast Burns, We Don’t Need Unity. We Need to Point the Finger at Those Responsible »