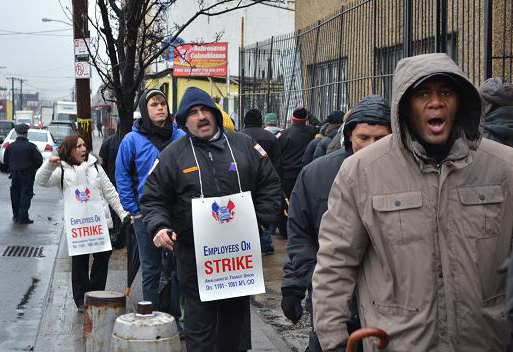 Eight thousand New York City school bus drivers and aides walked off the job today, vowing to defend seniority, wages, and training provisions that have been part of city school bus contracts since the 1970s.

Members of Amalgamated Transit Union (ATU) Local 1181 declared the strike after Mayor Michael Bloomberg refused to maintain worker job security and wage safeguards, known as Employee Protection Provisions (EPP), in the next round of bidding for bus contracts.

“This is a very professional and serious job that we get trained for,” said Anita Timmes, a matron who’s accompanied children on and off the buses for 23 years.

Timmes, who had been on the picket line since dawn, pointed out that many children use wheelchairs or are attached to medical devices such as respirators; they require more than just supervision. “I don’t think any driver can come off the street and do what we do,” she said.

As part of her job, Timmes goes through yearly trainings in first-aid and emergency preparation, in addition to being fingerprinted and licensed by the Board of Education. Long-term workers learn students’ needs, assisting them day in and day out. “We get attached to them as they get attached to us,” Timmes said.

Drivers too receive rigorous testing and training, including road tests and physicals, said driver John Jankowski, who has four wheelchair students on his route. He has worked as a driver for 22 years, and today is spending morning and night on the picket line.

As of this morning, ATU’s 8,800 members were on strike while members of Teamsters Local 854, which represents another 1,000 school bus workers, were sent home by their employer if they reported to work. According to the Department of Education, one in ten bus routes were operational.

Mayor Bloomberg and Education Chancellor Dennis Wolcott have attacked the union, calling the walkout “a strike against our children.” The union has countered with television commercials blaming the mayor and the education department for jeopardizing the safety of special-needs children.

For the last year the city has refused to negotiate with the bus drivers and aides, citing their status as employees of contractors, not public employees.

The Bloomberg administration’s move to strip out worker safeguards comes on the heels of a 2011 court decision that banned similar protections for bus companies servicing early-childhood education programs, citing their “anticompetitive and cost-inflating effects.” Ironically, the city had defended the contract safeguards in court, predicting—correctly—that their absence would provoke strikes and other disruptions.

Under the EPP system criticized by the court, when a subcontractor loses a route, displaced drivers and matrons are allowed to transfer into open positions at other bus companies, based on their seniority in the industry.

Their new employers are required to pay wages and benefits according to industry seniority—preventing contractors from dropping veteran drivers or pushing standards down through turnover.

As the mayor made clear today, the issue is not legal but economic, and his primary goal is cutting costs.

The city spends $6,500 per year, per student, on transportation, Bloomberg said, while the Los Angeles school district spends less than half that amount.

Drivers’ starting wage is $14 an hour. Aides make $11. When workers get to the top of the wage scale, they are making about $40,000 per year, a modest salary in a city with a notoriously high cost of living.

“It’s stressful and embarrassing to think that they want us to work for $7.50 an hour,” Timmes said.

As soon as the city stops enforcing the EPP, Timmes expects to lose her job to someone willing to do it for less, with less experience.

“We don’t want this to be a Walmart-ized job,” said Sarah Catalinotto, a member of Parents to Improve School Transportation, which formed to fight cuts to special education students’ transportation.

“As parents with children on the bus, we feel more comfortable with a driver who has a lot of experience,” she said.

Members at the Queens picket line this morning objected to city officials’ trying to pit workers against parents. “We have children that ride these buses,” said 22-year bus driver John Jankowski.

Local parent groups, including Catalinotto’s, are supporting Local 1181. “We can see the handwriting on the wall,” Catalinotto said, pointing out that the mayor’s cost cuts will come at children’s expense.

Margaret DePaula, a retired special education teacher, came to support the striking drivers and aides at the picket after working out alternate plans for her grandchildren’s rides to school. “Nobody cares about these kids more than these drivers and matrons,” she said.

The union plans to strike until the mayor agrees to reinstate the job protections.

Meanwhile, the bus companies are trying to end the strike through legal channels. The National Labor Relations Board said it could take up to 72 hours to process a complaint, and if it finds cause, to order union members back to work.

Samantha Winslow is co-director of Labor Notes.samantha@labornotes.org
Related
As Omicron Rages, Teachers and Students Fight for Safety Measures in Chicago and Elsewhere »
Steward's Corner: Using Pressure to Settle Grievances »
UPS Drivers Stage a Walk-in to Defend a Fired Co-Worker »
Christmas On Strike: Warrior Met Miners Stick It Out »
Whatever Happened to 'Eight Hours for What You Will'? »