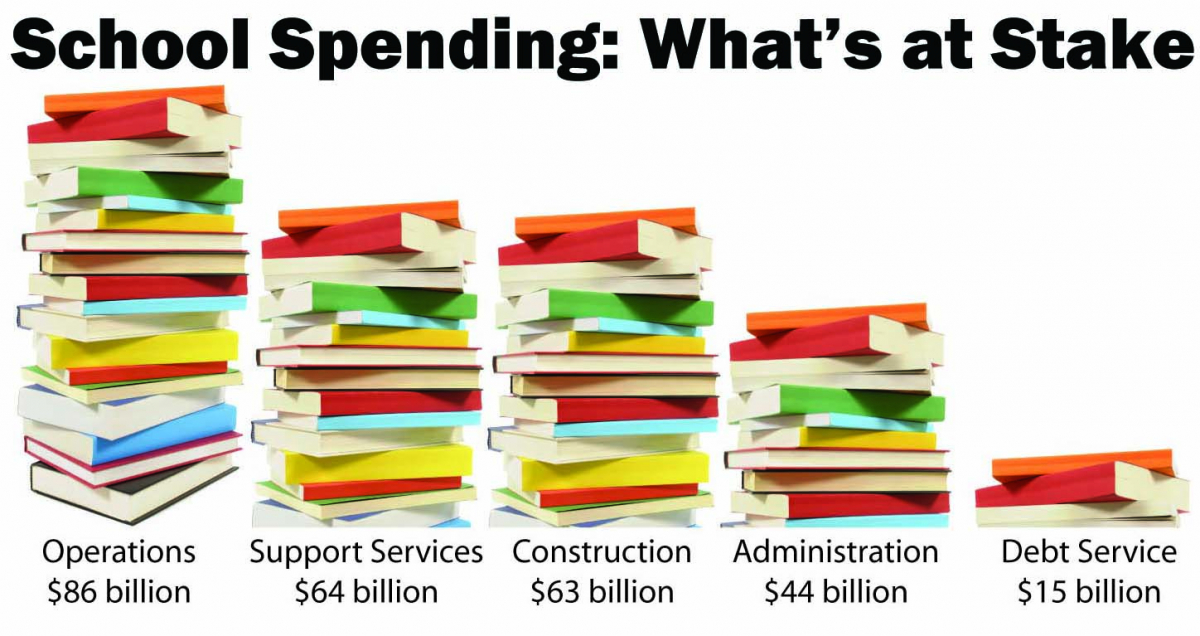 Wonder what’s at stake in the charter school debate? How about a pot of money as big as the Pentagon budget?

A little over half that spending—about $291 billion—is for classroom instruction, mainly teacher salaries and benefits, so it’s no wonder teachers have been in the crosshairs during recent budget battles.

It’s also why for-profit charter school operators are salivating at the possibility of taking over a bigger chunk of education. Making a profit is easy if you can give charter school teachers cheap salaries and skimpy pension and health benefits.

But even if they can’t get the whole enchilada, the privatizers want to capture bigger and bigger pieces of our public schools. The chart above illustrates how much money corporations stand to make by privatizing various parts of the nation’s education system.

All numbers are from the 2009 Digest of Education Statistics.

Topping the list is $86 billion spent annually on operations, including $20 billion for transportation and $18 billion for food service.

Corporate honchos are also eyeing the $63 billion spent on student support services, from librarians and multimedia specialists to school nurses and speech pathologists, as well as the $44 billion outlay for administration and back-office functions.

A version of this article appeared in Labor Notes #383, February 2011. Don't miss an issue, subscribe today.
Related
Victory Against Polluter Points Way to Clean, Green, and Fully Funded Schools »
Viewpoint: Support Veterans by Defending, Not Defunding, Public Sector Jobs at the Post Office and the V.A. »
Minneapolis Strike Wins Big Raise For Lowest-Paid Educators »
Review: How Labor Can Stop ‘The Privatization of Everything’ »
Why (and How) Michigan Nurses Rebuffed a Raid on Our Union »

When I lived in Japan people would often ask me to describe what makes Quebec different from the other provinces. Besides the obvious language differences- I would often mention that we had very good accessibility to post secondary education. The Cegep (system) has its ups and down, but at the end of the day you can get a nursing license in just three years for free here.
In terms of university tuition, Quebecers pay some of the lowest rates in North America. Increasingly there seems to be a trend towards increasing tuition rates to compensate for government cuts to education and research. Although this is discouraging on many levels, what concerns me most is that the push seems to be coming from the students themselves.
Even in Quebec, which has strong student activist roots, departments are beginning to look at charging “competitive” rates in order to attract top talent and presumably have smaller classes. Students in these programs such as the MBA at McGill are reported as saying that by increasing the tuition to 29 000 from 1600 students can get better service.

Business is already a fairly elite world, limiting the ability of certain students to participate in the program does nothing to help the social ethos. What program is next?

That way you can start things rolling while you wait for the state's finances to crumble to the point that we HAVE to privatize whatever's left! Someone should tell Mayor Bloomberg about this excellent idea.
[satire finished]