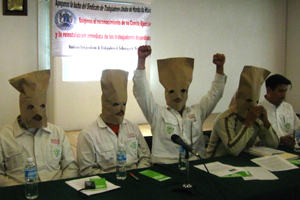 Honda workers at a Mexican factory wear bags over their faces to ward off reprisals from management as they announce their new union. But on December 20 management fired the union's leader.

Honda workers at a plant in Mexico have struggled for years against a hostile company, corrupt union, and subservient government. This month they took their battle public, making the violations of their rights visible and gaining allies at home and abroad. In reprisal, today management fired a leader of the new union. See below for how you can help.

The workers are from the plant in El Salto, Jalisco, that makes the CRV truck. Twenty-one hundred workers on two shifts assemble 5,000 trucks a month, most of them exported to the United States. This production in Mexico has given Honda a more stable position in relation to other auto companies, which have experienced a profound crisis in the North American market.

But behind the quality of this product hide retrograde labor relations. Honda management has systematically ignored the rights of the workers, with the support of federal and local labor authorities. They have denied workers the exercise of their right of free assocation and maintain against their will a “protection union,” the CTM (Central de Trabajadores de México, the largest official union in the country).

This charro union, as Mexicans call unions that serve the employers, plays the role of formally complying with Mexican law, but in reality it is an instrument that management uses to keep salaries the lowest of all assembly plants in the country. The daily wage is $10-$12.30 per day. In contrast, the Volkswagen plant in Puebla, which has an independent union, pays $29 per day.

Given the absence of a real union, the company overloads the jobs, with the consequent jump in accidents. The atmosphere at Honda is one of constant hostility and contempt for the dignity of the workers on the part of the foremen. Meanwhile, Honda’s logo reads “The Power of Dreams.”

Since 2009 workers have been resisting and have held several work stoppages to demand that management modify its demands and its attitude. In every case management has responded with repression and firings of the workers it saw as leaders.

This year workers began building a real union as one way to defend their rights. They elected an executive committee for their United Workers Union of Honda Mexico. But local and federal authorities, under pressure from Honda, have systematically denied, under whatever pretext, the recognition of the democratic union.

The workers decided to up the ante. They held a press conference December 9 in Mexico City and another December 13 in Guadalajara, the state capital. At both events Mexican unions expressed their solidarity, in particular the independent union of Volkswagen workers in Puebla.

Workers wore paper bags over their faces to try to ward off reprisals from Honda. But on December 20 management fired the union’s secretary general, José Luis Solorio.

President Bob King of the United Auto Workers had sent a letter of solidarity, marking a change in the international policies of the UAW. King wrote, “We understand that for far too long, the employers of the automobile industry have been able to divide us by race, border, language and political orientation, while increasing their profits as our wages, benefits and working conditions stagnate and get worse.

“It's time to say ENOUGH to the politics of division that make us weaker.”

For independent Mexican unions this creates an opportunity to develop ties of unity, in a time when the companies are aggressively exploiting union fragmentation and the salary differences between Mexican and U.S. workers to increase their profits.

Huberto Juárez Núñez is a professor in the Center for the Study of Economic and Social Development at the University of Puebla.