‘One Nation’ to March on Washington Oct. 2 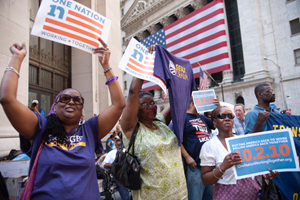 Under the slogan “win the change we voted for," unions and allied organizations have begun work organizing a big rally in Washington for October 2 to show their numbers and demand fair, decent jobs. A kick-off event in New York built momentum one month before. Photo: One Nation.

If Charles Jenkins and Don Trementozzi have their way, tens of thousands of poor and working class people will descend on Washington October 2. Unions and allied organizations have begun work organizing a rally, called One Nation, to show their numbers and demand fair, decent jobs.

It takes place exactly one month before the November Congressional elections.

“People have a lot of interest in getting on a bus,” said Jenkins, who is helping to build a website and bus seat reservation system for the rally. “We’re getting a lot of responses from church, student, and union groups that just feel hopeless in terms of what this country is able to afford them.”

1199SEIU President George Gresham is credited with having the idea for One Nation, along with NAACP Director Benjamin Jealous. “We are going to be marching for jobs for all,” said Gresham, “and an economy that works for working people; funding for education and health care, not warfare; clean, renewable energy; civil, women’s, labor, and LGBT rights; and comprehensive immigration reform.”

He added that his union is pouring “massive resources” into this mobilization, and will be turning out “tens of thousands” of members from New York, New Jersey, Massachusetts, Florida, Maryland, and the capital itself. 1199SEIU is a 350,000-member health care local that spans the East Coast.

Organizers in New York state say they have already reserved more than 3,000 buses.

Gresham did not mention the election, but labor historian Nelson Lichtenstein thinks the rally’s timing is significant.

“This thing could be big,” said Lichtenstein, who directs the Center for the Study of Work, Labor and Democracy at the University of California Santa Barbara. “The problem is that it should have been in February.”

With just 30 days to go before the elections, said Lichtenstein, “should you spend lots of energy getting people to the march on Washington, or ringing doorbells in Canton, Ohio? I’m sure the message will be, ‘OK, return to your hometown and start knocking on doors.’”

The AFL-CIO has thrown its support behind One Nation, and appears to view it as one way to get out the vote.

The federation’s Executive Council issued a statement backing the rally that said the march “will charge up an army of tens of thousands of activists who will return to their neighborhoods, churches, schools and, especially, voting booths, with new energy to enact our common agenda. And on the same day, the labor movement will walk door-to-door in targeted states around the country.”

Under the slogan “Win the change we voted for”—a phrase that could just as easily be on a Democratic get-out-the-vote poster—1199SEIU and the NAACP are co-chairing the One Nation effort. Fact sheets and flyers are available on both organizations’ websites.

Other unions that have signed up to turn out members include CWA and the Teachers (AFT). Foster Stringer of the AFT said it’s “too early” to say how many of his union’s members will hit the streets for One Nation. “We are fully committed but no one has decided on a number,” he said.

Whatever its political ramifications turn out to be, One Nation’s organizers are passionately committed. “In 1981 we marched on Washington after Ronald Reagan fired the air traffic controllers,” Trementozzi said. “I was there and I marched. This time the march is because fair jobs are getting killed and jobs are going overseas. [It’s about] getting fair and equitable jobs and putting America back to work. We’re all in this together.”

Despite his reservations, Lichtenstein says unions, with their potential to be at the “core of progressive politics in this country,” are the right group to organize One Nation—“and the Democrats who fail to understand that are cutting their own throats.”

A version of this article appeared in Labor Notes #378, September 2010. Don't miss an issue, subscribe today.
Related
Auto Workers Win Direct Democracy in Referendum »
We Need Democracy on the Job and in the Union, Too »
2020 in Review: Workers Struggle Under the Weight of the Pandemic »
Why Did California's Tax the Rich Measure Lose? »
Viewpoint: This Election Shows Labor's Ground Game Matters (Especially During a Pandemic) »

Hopefully this march will fuel and spearhead REALISTIC results for millions of Americans across the country. The harsh reality is that both of these Organizations have alot more power and control over assisting the American People than they actually provide. Gathering thousands of people together is one things but using the influential power that these organizations possess to actually make landmark changes for American People is the actual reality. When are we going to stop stepping around the line and cross the line. Pumping up thousands of financially stressed individuals to gain the attention of political leaders have never been the real issue. The true issue is CAPITALISM

As part of a few groups that are working to build a peace table and a peace plank to the rally and march, it was disheartening to see no mention of "peace" in the article. Though I understand the thrust of the rally will be for electoral purposes, this march is an opportunity for the progressive and more militant unions that understand and recognize the use of the U.S.'s global military interventions and adventurism as the buttress for neoliberal policies. It makes no difference which party is in power, both coalesce in agreement around economic hegemony.

These policies are inherently anti-worker, and the union movement has got to stand with the working people of the world by demonstrating against money for war and occupation and a redirecting of funds for green technology, education, housing and social needs.

The demands should be for "Out Now" and for independence from either major political party. Until unions began to link militarization with its adverse affect on workers and their needs, they will be carrying water for the Democrats, who though are better than the Republicans in some ways, in the end only serve the purpose of defusing any real substantive social change that puts people at the center of policy rather than the moneyed elite.

I'll be there Oct. 2nd, along with hundreds of others who will be demanding "Out Now." Placards will be distributed, so if there carry the signs that will serve as a strong message to Democrats that war and occupation must cease.

The slogan shouldn't be "Win the change we voted for," but rather, "WHERE IS the change we voted for?" Or, for the really incensed, "Where the f**k is the change we voted for?" Politics isn't a sporting event with "winners" (and losers). Working class people don't need to "win." They simply need what is rightfully theirs since they create all the wealth: living-wage jobs; good benefits; affordable health care; pensions; Social Security; the promise of a better life for their children; quality public education; high ed accessibility and affordability; the Employee Free Choice Act so more people could join unions; and most importantly, a political party that truly represents the interests of the working class. That does NOT exist in our country right now. The goal of both parties is to represent the interests of the economic elite. And until we have real campaign finance/lobbying reform, all the slogans, banners, and marches won't do jack. The only way we will ever get a party in this country that represents the interests of the working class is if we can start getting working class people elected to our high-level offices. With the current system, that will never happen. When money buys politicians, the working class don't stand a chance. But good luck on Oct. 2. I'll be checking the want ads to see of those "good jobs now" are in there.