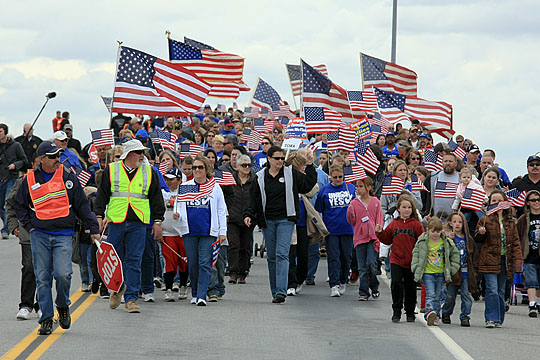 Labor in Southern California has rallied behind locked-out miners in the High Desert. Photo: Slobodan Dimitrov.

It’s day 58 of the miners’ lockout in Boron, California, in the harsh desert of Kern County. From the pews to the union halls, the coffee shops, and schools, the town has galvanized into a community driven for its very survival.

Back on Day 35, a Saturday morning, more than a hundred members of the California School Employees (CSEA) came to town. They gathered at the union hall of Longshore (ILWU) Local 30 and together with the locked-out families marched to the front gate of Rio Tinto’s open pit borate mine.

The miners held American flags to remind the British and Australian owners of Rio Tinto that they are on U.S. soil. As they reached the padlocked gate, miners and school employees together begin to chant, “We want to work!”

Once rarely heard in California but now all too familiar, the chant was heard by the anxious security guards but not by the Rio Tinto board of directors far away. The company had given the 560 miners an ultimatum: cave or be locked out. That happened on January 31 at 6:59 a.m.

To the west sits another town, Arvin, where the filming of John Steinbeck’s "Grapes of Wrath" took place. Boron, like the fictional Weedpatch Camp, is already evoking similar images, not so much for the bitterness over the lock-out but for the kindness and concern that the town of Boron is showing over the fate of a quarter of its 2,000 citizens.

Rio Tinto, the world’s fourth-largest mining company, has a long history of attacks on workers. Founded in 1873 to channel British capital into mining projects in Spain, the company welcomed dictator Francisco Franco to power. In 1937 Rio Tinto managers announced, “Since the mining region was occupied by General Franco’s forces, there have been no further labor problems ... Miners found guilty of troublemaking are court-martialled and shot.”

Rio Tinto’s business partners read like a “who’s who” of the most brutal dictators of recent history: Suharto in Indonesia, Pinochet in Chile, and apartheid South Africa, where Rio Tinto still racially segregates company housing and pays Black miners far less than whites.

The British-Australian multinational’s most shocking attack was in Bougainville, an island in Papua New Guinea. After destroying rainforest and poisoning residents with toxic waste from its copper and gold mines, Rio Tinto paid $10.3 million to the country’s military and supplied weaponry and private militias to crush residents trying to close the mine.

When this didn’t work, the company began a 10-year blockade of the island. By the end of the war in 1999, the blockade had killed 15,000 people, 10 percent of the population. Rio Tinto’s Bougainville manager was successful in his stated goal—to “starve the bastards out.”

Despite profits of $4.87 billion in 2009, Rio Tinto continues to squeeze workers. Government bailouts have secured the global prices of many of Rio’s commodities: uranium, aluminum, copper, gold, and iron.

Rio Tinto’s consistent anti-union campaigns were the focus of a 1998 meeting of mining unions held in South Africa, where activists discussed the company’s tactics. Describing a company plot to unravel labor law by placing managers in government, an Australian unionist warned, “If Rio Tinto hasn’t come for you yet, it is only a matter of time until they do.”

Rose Fowlkes works at the K & L Café. She says they often bring food and coffee to the miners, both at the hall and at the gate. Her husband Mike Fowlkes has made boric acid for four years.

Miner Kevin Martz’s wife, Kayla, collected $4,000 for childcare of miners’ small children with her church group. In another case, a call made from the pulpit immediately provided a dozen part-time jobs from the community.

“Our jobs are tied to the community and our schools,” Martz said at the rally. “Taking away our right to schedule shifts would mean we wouldn’t be able to honor commitments to volunteer and coach after school hours.”

The community’s refusal to be cowed into submission has captured the attention of organized labor in California. The response has been compelling.

On February 16, a conference of mining and maritime unions from around the world took place in Palmdale, a few miles south of Boron. Delegates from South Africa, New Zealand, Australia, Turkey, and the European Union marched to the locked gates of Rio Tinto—a company many had confronted in their own countries.

A week later a caravan of more than 200 cars made a journey into town. Four big rigs, driven by the Teamsters, pulled trailers loaded with $32,000 of food and sundries from the Los Angeles County Federation of Labor.

When the caravan eased into the desert town of Mojave, locked-out family members stood on overpasses holding welcome signs. Cheering men and women from Local 30 lined the streets alongside the union hall. By the time the cars reached the locked front gate, the caravan had grown to 350 vehicles.

The mine is operating with replacements from out of state, brought in daily on buses with darkened windows, but production is said to be a fraction of former output. The NLRB is investigating charges that the lockout is illegal, but the union is focused on mobilizing support in California and around the world to win the fight.

Slobodan Dimitrov is a photographer in L.A.

A version of this article appeared in Labor Notes #373, April 2010. Don't miss an issue, subscribe today.
Related
How Intermodal Yard Workers Doubled Their Pay »
Christmas On Strike: Warrior Met Miners Stick It Out »
It's Awfully Convenient for Shippers that Longshore Workers Get Blamed for Delays, As Contract Fight Looms »
Striking Alabama Coal Miners Want Their $1.1 Billion Back »
Striking Alabama Miners Call Out NYC Hedge Funds for Bringing in Scabs »