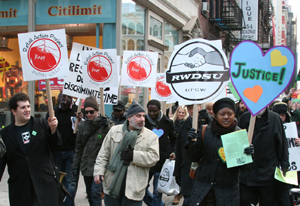 Wage-thieving employers, beware: the owner of a New York boutique chain accused of shorting workers by $1.5 million was taken away in handcuffs Tuesday.

State Attorney General Andrew Cuomo alleges the owner, David Cohen, not only paid some workers less than $5 an hour and ignored overtime rules as workers clocked 60-hour weeks—but also offered a worker $50,000 to inform on organizing in the stores.

Cuomo charges that Cohen underrerported salaries and the number of employees to the state, robbing the unemployment insurance fund and leading to 38 felony counts for filing false business records and “offering a false instrument.”

He faces up to four years in jail and civil action to recover the wages stolen from 150 workers.
The arrest follows months of organizing in the stores by the Retail Action Project, an organizing venture sponsored by the Retail, Wholesale, and Department Store Union (a Food and Commercial Workers affiliate).

One seed for the campaign was planted when 22-year-old Carolina Ferreyra passed by a RAP rally last summer on her way to work at Madness, one of Cohen’s seven budget boutiques in SoHo.

The rally was outside Scoop NYC, another lower Manhattan clothing retailer accused of abysmal conditions and refusals to pay overtime. Ferreyra hung on to the flyer she was handed for months, as she watched her store burn through workers.

“Every day there was somebody new, somebody getting fired,” she said. “They would use them up and when someone complained, they were fired.”

Ferreyra says she worked up to 65 hours a week with no overtime. Other workers, like Sadiq Nukunu, said they were paid a flat fee of $340 despite working opening to close, 66 hours, six days a week.

Finally, after a confrontation with her supervisor, Ferreyra dug up the flyer and contacted RAP. Soon she and co-workers were meeting with organizers—and then the state’s attorneys.

Cohen caught wind of the organizing drive after getting hold of a worker’s Facebook message. Besides allegedly trying to bribe his way out of trouble, he began interrogating workers and firing those he thought were involved.

Phil Andrews, a RAP organizer, said several workers who had no contact with the campaign were booted—and that immigrants were especially targeted as Cohen feared a raid. Cohen’s attorney says he intends to fight the charges.

Dianne Enriquez, coordinator of Interfaith Worker Justice’s nationwide network of 21 worker centers, says prosecutions in wage theft cases are unusual. A few city attorneys are showing interest, though, as the recession has added to the already blooming crop of cheating employers.

“Why don’t employers get jail time when they steal?” she asked. “This is a great precedent. When someone steals a TV from a house they go to jail.”

RAP staged a march February 3 against the boutiques and other surrounding employers that organizers say have cheated workers out of millions. The union-backed group focuses on a small slice of lower Manhattan’s retail-rich environment because many SoHo employers know each other—and because many workers bounce from one store in the neighborhood to the next, suffering the same treatment at each.

“The grand plan is to create a situation where retailers are afraid to go below the minimum wage,” Andrews said, “and to use these examples both in the community of workers and the public at large to show that this is a big problem—we need to raise the floor, we need a living wage.”

The union and its allies are moving on multiple fronts to achieve the goal.

In December they convinced the City Council to cancel subsidies promised to a Bronx mall project, after the mayor and the developer refused to guarantee retail workers there at least $10 an hour.
Along with Make the Road New York, a workers’ advocacy group, they’re pursuing a living-wage campaign at a Queens mall that’s sucked down $48 million in public subsidies and spawned 3,100 jobs paying an average of $7.72.

And the union is backing a bill that would mandate living wages at developments that pull in public money. It’s also seeking tighter reviews of how money is spent by administrative bodies that grant subsidies.

Cohen’s business is the latest in a series of retail chains in the city to face state investigations after the union and community groups uncovered sub-minimum wages. Several smaller grocery stores have settled hundreds of thousands of dollars in claims with baggers after owners were accused of paying them zero wages—they made only tips.

At Yellow Rat Bastard, a chain of clothing stores whose anchor is in SoHo, the owner was arrested. He settled wage and overtime claims for $1.5 million two years ago—and gave a union neutrality pledge, too.

“If your business model is predicated on complete illegality, it forgives a lot of disorganization in your business,” Andrews said.

But the union won workers’ respect in SoHo long before union cards were signed, he said, by attacking workplace problems like favoritism in scheduling and discipline.

Union density in retail is so low that small employers are likely to shut down and reopen elsewhere rather than deal with the union, and large chains have almost limitless resources to fight organizing.

“That’s the conundrum of the whole thing—you used to be able to raise standards by organizing a majority of plants,” Andrews said.

Now, the union and its allies aim to remake the retail industry through a complex campaign: discipline bottom-feeding employers, engage workers and the public, and use legislation to ratchet up standards broadly.

“It’s pretty obvious that retail is going to the lowest common denominator, and some employers have figured out there are methods and communities you can exploit easier,” Andrews said. For at least one stretch of New York, those days, it seems, are numbered.