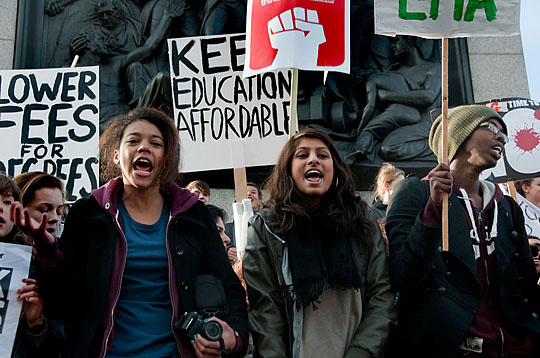 Britain’s austerity budget has drawn strong criticism from most unions, but students, stung by a tripling of tuition, have led the resistance. Photo: Janine Wiedel Photolibrary/Alamy.

When Margaret Thatcher was prime minister of Great Britain in the 1980s, she famously stated there was “no such thing as society,” only “individual men and women.”

Last year, the current Conservative Prime Minister, David Cameron, offered what appeared to be a more compassionate conservatism: “There is such a thing as society,” he said. “It’s just not the same thing as the state.”

What Cameron envisioned was massive pain: huge cuts to services and public workers, with the slack taken up by volunteers, concerned citizens, and the private sector.

He termed it the “Big Society,” in which citizens’ groups and commercial entities would band together to fill in either where there is no government provision or where public services are deemed unsatisfactory by recipients.

The idea is nearly devoid of content—Cameron has provided so few examples of what services might be taken on by volunteers—and unrealistic, because no amount of voluntarism can compensate for the enormous cuts to the public sector.

Cameron has proposed to allocate $109 million to backstop voluntary efforts—a paltry amount given that public sector cuts in the second half of 2010 alone amounted to $9.3 billion. Teaching subsidies to universities were cut by 80 percent, paving the way for a tripling of student tuition.

So far, the austerity budget has attracted strong criticism from most of the United Kingdom’s unions but little in terms of concrete action.

All three main political parties in the UK (the Conservatives, or Tories, their coalition partners the Liberal Democrats, and the opposition Labour Party) lined up behind the austerity budget. It slashed public spending to eliminate the deficit that was incurred when the banking collapse led tax revenues to plummet.

The Labour Party said it would have made the same cuts, only slightly more slowly. (It was a Labour government that bailed out the banks in 2008-09 to the tune of $131 billion.)

But while the deficit was the immediate pretext for the savage cuts, for Cameron’s Conservative Party there was an underlying ideological rationale that transcended the deficit. The party is committed to withdrawing the government from public life, a project started by Thatcher, and allowing market forces and volunteers to fill the gaps.

In fact, Cameron has even suggested it was “big government,” not the banks, that “got us into this (economic) mess.” He has confirmed that once the deficit is under control, funding will not be reinstated.

Cameron has suggested local communities could run bus services and recycling schemes, and has called for parents, teachers, and charities to take responsibility for failing schools by establishing their own “free schools.”

Based on charter schools in the U.S. and “free schools” in Sweden, the idea is to allow government to offload responsibility for underachieving schools and pass the buck to charities and volunteers, which are encouraged to set up competing schools pulling on both government subsidies and private financing.

Cameron is also expanding school “academies,” first started by Labour Prime Minister Tony Blair, that rely on corporate sponsors. They expect a financial return on their investment and have input into curriculum.

Students have led the opposition to the cuts, which have resulted in an unprecedented rise in tuition. In the days preceding Parliament’s vote to increase tuition, dozens of protests and sit-ins rocked campuses across the UK.

The Universities and Colleges Union, which represents professors, voiced immediate support and had a strong presence at the national demonstration against tuition hikes.

Unison, the largest public sector union, released a detailed “no-cut recovery budget” to challenge the widespread belief that there is no alternative to the cuts. It included a proposal to tax incomes over $156,000 at 50 percent—but was virtually ignored in the mainstream press.

Other unions are restless and say they are looking for ways to support the student demonstrations, which are expected to continue. According to Len McCluskey, the leader of Unite—the largest union in the UK, with members from every industrial, occupational, and professional sector—the student protests refreshed politics in a way that “a hundred debates, conferences, and resolutions could not reach.”

McCluskey has called for unions to unite with students in “an alliance of resistance.” Early this year, the Trades Union Congress (the federation of UK labor unions) will hold a special meeting to discuss coordinated industrial action to protest the austerity program and to analyze possibilities for a broader strike movement.

How broad this might be is not yet clear. There is no history of private sector unions walking out in support of public sector unions in the UK. The unions have done little to create the expectation of serious action along the lines of the one-day strikes that shook Greece, Portugal, Spain, and France.

It is hard to escape the sense that the unions are still behind the curve—calling for action rather than taking it. Part of the problem is that many unions continue to give financial support to the Labour Party, despite its transformation by Tony Blair into a “third way” party that no longer challenges the neoliberal consensus.

There is widespread dissatisfaction with the austerity cuts but also a belief that there is no alternative. At present, it’s not clear the unions will do anything beyond verbal condemnation.

Maria Ryan teaches at the University of Nottingham.

I can't fault the general analysis of Maria Ryan's piece and the link betweeb New Labour and the trade unions. However the scale of the cuts and the savage impact they will have on jobs was a wake-up call to the unions. I was at the TUC Congress in Manchester in September 2010 and the change in the attitude towards a campaign to challenge the cuts and present alternatives, was clear. Unison and the PCS, two of the biggest public sector unions, agreed to coordinate action where possible.

But the most noticeable gap in Maria's piece is it doesn't mention the massive mobilisation for the march called by the TUC in London on Saturday 26 March: http://marchforthealternative.org.uk/

She also points out the TUC is looking at possibilities of a broader strike movement and notes 'How broad this might be is not yet clear. There is no history of private sector unions walking out in support of public sector unions in the UK'. Well there is, but it predates the assault on the trades unions and the antil trade union laws introduced under Thatcher (thirteen pieces of anti-trade union legislation). The real condemnation of New Labour is that - apart from the Fairness at Work at Act which gave unions limited rights to organise in work places (legislation which Tony Blair was unhappy about) - the rest of the THatcher anti-union legislation remained in force.

This is the 25th anniversary of the Wapping dispute when Murdoch sacked 5,500 printworkers in Fleet Street, London. At one stage the anti-union laws meant that the whole of the funds of one of the unions, SOGAT, were sequestrated by the courts.