Fighting a Co-Worker's Deportation at Our Hospital 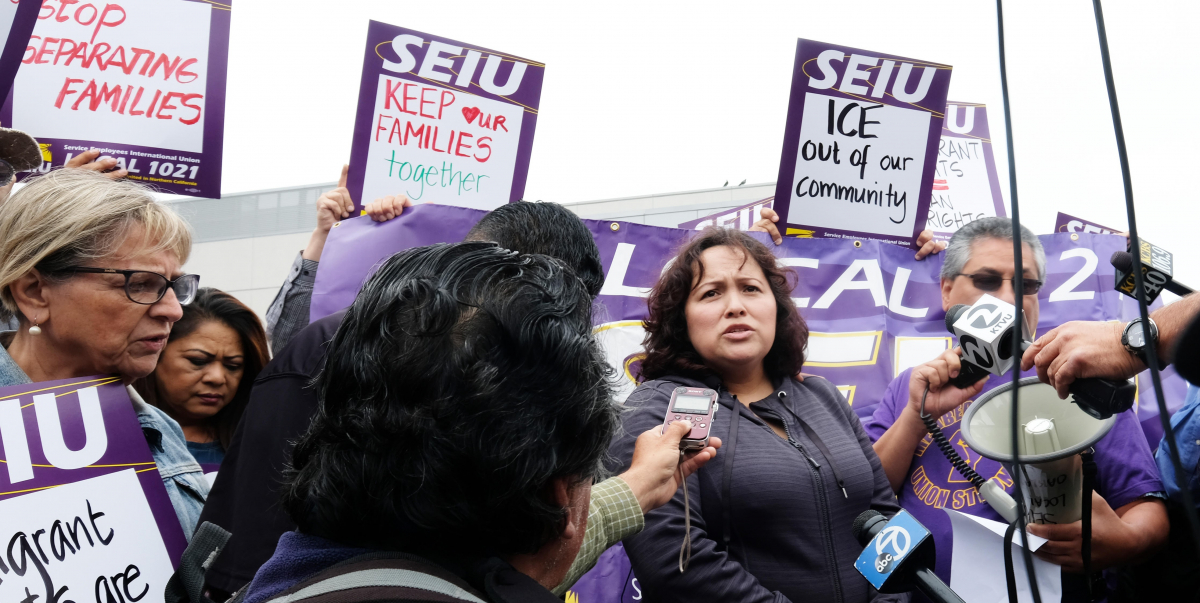 Union members at an Oakland Hospital mobilized in solidarity with Maria Mendoza Sanchez over the summer. While they were unable to stop her deportation, the union got management to agree that members could donate their own vacation time in support. Photo: SEIU Local 1021

When our hospital bargaining team learned that our co-worker Maria Mendoza Sanchez and her family were to be deported in less than a week, we were shocked. Though we knew it might be too late to act, we decided we had to do something.

In the end we weren’t able to stop Mendoza Sanchez’s deportation. But through collective action we were able to soften the blow, negotiating an agreement that allows union members to donate their own vacation time to support Mendoza Sanchez and her family after her own leave time runs out. And we learned how quickly we could mobilize wide support in a case like this.

Until her deportation in August, Mendoza Sanchez was a nurse in the telemetry/oncology unit at Highland Hospital in Oakland, California. Highland is a typical public hospital—a place where people can go for care if they don’t have insurance, a last resort in a health care system designed to generate profit.

Highland is no exception to the industry norms of short staffing, high workload, and lack of proper equipment. Nurses on Mendoza Sanchez’s unit often work without breaks for entire 12-hour shifts, because they are forced to choose: Do I leave my patients without a nurse so I can get a drink of water or use the bathroom, or do I continue providing care and suppress my own needs?

Union members knew Mendoza Sanchez as someone you could depend on. “She was one of those people that helped everybody,” says Harold Woodard, a nurse and member of the bargaining team. So you can imagine how upset we were to hear that she was going to be deported in days, under the Trump administration’s accelerated deportation program.

Mendoza Sanchez came to the U.S. in 1994 from Mexico. Starting out as a housekeeper in a nursing home, she put herself through nursing school, working the overnight shift. She and her husband Eusebio, a truck driver, were able to save enough money to put a down payment on a home, where their three daughters, ages 16, 21, and 23, will stay. (They took their 12-year old son, a U.S. citizen, with them to Mexico.)

For years the couple pursued a green card by every avenue they could find, spending an estimated $45,000 on legal fees. Mendoza Sanchez never told her co-workers about this struggle. “I just kept it to myself,” she says. “Not everyone is sympathetic to immigrants... I kept quiet because I didn’t know what else to do, and I didn’t want to burden others.” But when word got out about her deportation, all you heard from co-workers was concern and support for Mendoza Sanchez.

Despite the short notice, we organized ourselves quickly. A member of our bargaining team texted the local president and got an immediate response (“How barbaric!”) and a pledge of robust support and resources. Rank-and-file members, elected leaders, and union staff worked through the weekend to plan a rally to support Mendoza Sanchez and her family. Word travelled quickly in the hospital as stewards passed the word and circulated flyers. We also reached out to other unions, community groups, the media, and the county labor council.

Hundreds of people showed up for the rally in front of the hospital—so many that the crowd spilled over the sidewalk into the street. Many hospital workers who came didn’t know Mendoza Sanchez personally, but empathized with the injustice of her situation. Some wore buttons proclaiming “No One Is Illegal” in English and Spanish.

Bargaining team member Veronica Palacios called the huge rally turnout “a display of overwhelming support and camaraderie.” A group of retired nuns came. Nurses from another union, the California Nurses, showed up in their red T-shirts. A group of doctors showed up with a banner and announced they’d raised thousands of dollars in online donations for Mendoza Sanchez’s family. We even got the hospital system CEO to speak on camera in front of our union banner.

Mendoza Sanchez choked back tears when she took the bullhorn, to applause and cheers from the crowd. Veronica Palacios, an eligibility specialist in the emergency room, spoke too. “Instead of Maria it could have been me,” she said. “It could have been any of us.”

In bargaining, we got management to agree that members could donate their own vacation time to provide Mendoza Sanchez and her family with benefits and income after her deportation.

Our organizing didn’t prevent Mendoza Sanchez’s deportation. She and her husband had to leave behind three children, a home, secure jobs, and their network of friends and family. But we did send a message to members that no one is alone—and the swift response we were able to mobilize this time gives us hope that through solidarity we can accomplish more and more.