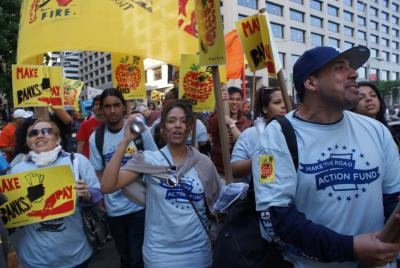 As unions' member rolls—and relevance—dwindle, Mark Brenner argues, we should take a note from these Wall Street protesters and make every fight about the 1%. Required reading on your way to L.A.! Photo: Michael London.

It’s Labor Day again, and some union stalwarts are packing their bags for the AFL-CIO’s quadrennial convention September 8-11. Whether you’re a rank-and-filer or among labor's top brass, the convention is an important time to discuss strategies for reviving labor's sagging fortunes. We combed through our coverage and chose ten of the sharpest, most timely articles we’ve published in recent years.

Here they are: required reading as you fly, ride, or hitchhike your way to L.A.

The last few years have created some uncomfortable arithmetic for unions. Mark Brenner asks the frank question: Are we at a tipping point, where labor is no longer able to influence conditions and create a shared working-class common sense? If we are, where should we focus?

2. How Chicago Teachers Got Organized to Strike

The seven-day Chicago Teachers Union strike last September didn’t just beat back a mayor bent on imposing some very bad education “reforms.” Their win was possible because of several years of patient organizing, focused on getting members to step up. Organizing Director Norine Gutekanst explains exactly how they did it.

Common wisdom says you can't raise taxes. Even people who should know better believe this—while the public sector slides further down the tubes. But a California vote raised $6 billion a year for schools and services, mostly from an income tax hike on rich people. Fred Glass reveals just how it was done.

Organizing has fallen off the map in most conversations about labor’s future, Hetty Rosenstein observes. Every day we shrink further and further. Every organizing drive is more difficult to win. What—if anything—is refreshing about our organizing?

5. The Corporations Have Two Parties, Now What?

Lately you may have heard a co-worker, or even yourself, muttering “We need our own political party.” Former leaders of the Labor Party are encouraging a discussion of the idea, writes Jenny Brown.

If we want to recover labor’s lost tools of workplace-based solidarity, Joe Burns argues, we have to hit employers at multiple points in production and distribution chains—with secondary and industry-wide strikes. Hopefully striking fast-food workers are just the start of a welcome trend.

7. Home Is Where the Fight Is

Union revival requires moving beyond bread-and-butter issues, and Alexandra Bradbury reports on one great example, unions pitching in to stop evictions. “Anyone who’s facing a housing crisis will also have a job crisis story to tell you,” says Tony Romano, part of a coalition that fights foreclosures.

President Obama's policies have cost thousands of immigrant workers their jobs. But Eduardo Soriano-Castillo reveals how SEIU Local 26 fought alongside immigrant members and communities, used the contract to win protections, and extended the gains to non-members.

9. How Can We Solve the Jobs Crisis?

Three years into a staggering recession, Washington finally started talking about jobs. But unfortunately for 25 million people who couldn’t find full-time work or had given up looking, Mark Brenner points out, Congress stayed stuck on pea-sized proposals. Where are new engines of economic growth?

The country is in a bad mood, and legitimately so. Our task, according to Gordon Lafer, is to help people find the clarity and courage to direct their anger at those responsible for their misery.

Related
Viewpoint: Two Contrasting Visions of the Labor Movement Were on Display in June »
We Can't Just Keep Saying 'Pass the PRO Act.' We Have to Organize. »
Steward's Corner: Making Rallies Look and Feel Powerful »
The Strike Wave Shows the Tight Labor Market Is Ready to Pop »
Richard Trumka, 1949-2021 »