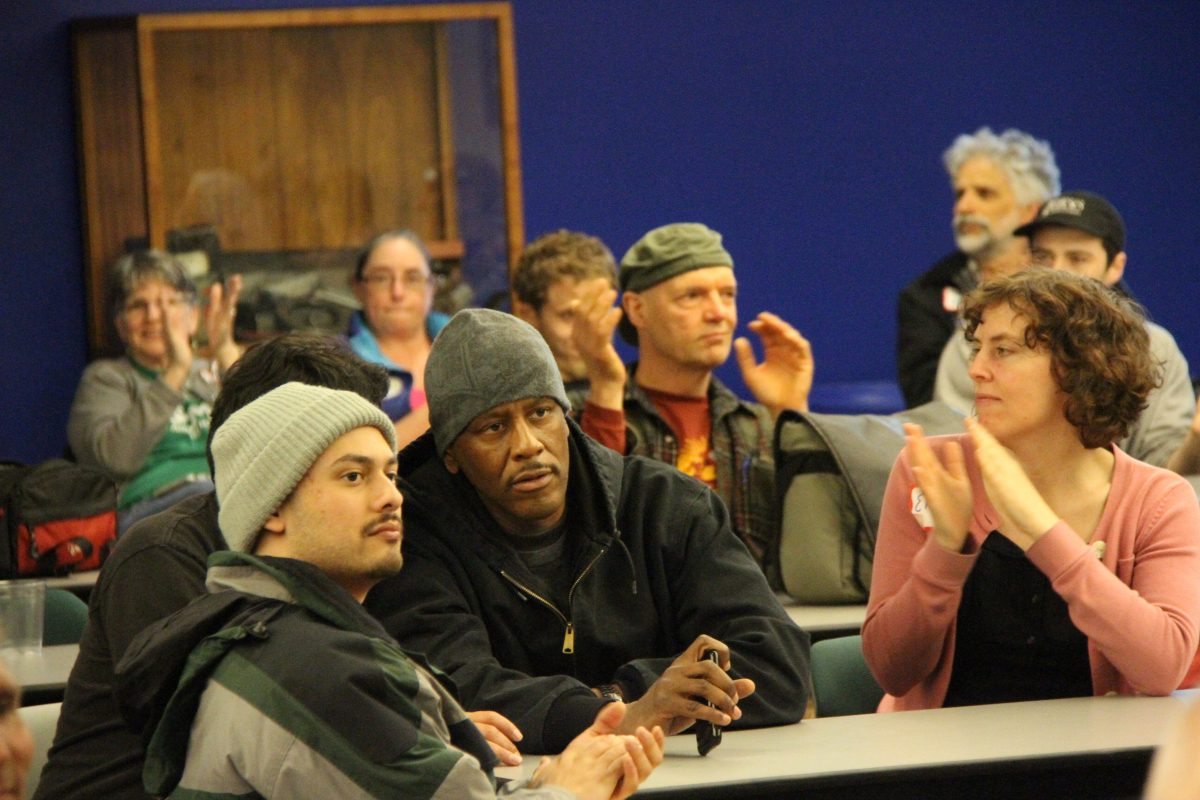 Attendees from 50 local unions and community organizations spent the day together at the Portland Troublemakers School, learning and organizing for the future of the Northwest labor movement. Photo: Peter Parks and May Wallace.

Attendees from 50 local unions and community organizations spent the day together learning, discussing, and organizing for the future of the Northwest labor movement. Some dedicated state workers and bus drivers traveled in from five hours away to participate in the one-day organizing school.

Sara Chambers from the Chicago Teachers Union led a workshop on lessons learned. Joe Burns, author of Reviving the Strike, was joined by workers and retirees from key strikes in the region, including Boilermakers and UNITE HERE.

Walmart workers active in the Food and Commercial Workers’ OUR Walmart campaign told how their confidence had grown to the point that they felt safe striking for better working conditions.

Learning about each other’s struggles “builds solidarity, teaches new tactics, and inspires us,” said Wesley Buchholz, a Laborers Local 483 activist. “Troublemakers Schools and the Labor Notes publication are two of the best tools we have.”

The key to success was the organizing committee’s wide network of connections—from the Laborers, Plumbers and Pipefitters, and Service Employees, to the Industrial Workers of the World, day laborer organization VOZ, homeless direct action group Right2Survive, and Oregon Fair Trade Campaign.

We were amazed by the range of people in the room—it seemed that every job and industry imaginable was represented. In the workshops, day laborers, janitors, bus drivers, pipefitters, nurses, and teachers found issues in common and learned to appreciate each others’ struggles.

Although the conference itself was only one day long, the weekend was filled with Labor Notes-related social and educational events to encourage networking and discussion. Many new friends were made and connections strengthened. A spark has been lit in Portland.

Conference organizers plan to keep it burning by organizing follow-up social activities and other events. We discovered a hunger to rebuild a union culture in Oregon founded on friendship, solidarity, and a desire to wage a united fight.

We strongly encourage other Labor Notes readers to organize their own regional or city conferences for a truly memorable experience. To inquire what’s needed, email Samantha Winslow at Samantha[at]labornotes[dot]org.

Meanwhile, check out these links to listen to recorded sessions from the 2013 Portland Troublemakers School:

The next Troublemakers School is in New York City May 18, 9 am to 4 pm, at 345 E. 15th St. Workshops include Beating Apathy, Dealing with Difficult Supervisors, After Bloomberg: A Union Agenda for New York City, and Labor-Community Alliances Done Right. Find more details and register online here.

Related
Swarming Solidarity: How Contract Negotiations in 2021 Could Be Flashpoints in the U.S. Class Struggle »
Cleveland Heights Teachers Strike in the Snow, Beating Austerity with Solidarity »
When You're Winning in the Streets, Don't Lose at the Bargaining Table »
Understaffed and Unsafe, Bay Area Hospital Workers Strike »
Lessons from the NBA Strike for Black Lives »