Graduate students at the University of California Santa Cruz launched a wildcat grading strike in December and are now organizing for a full strike. They're fighting for a cost-of-living adjustment in one of the most unaffordable cities in the country.
Photo: Stephen Louis Marino

Protesting low wages in one of the most unaffordable cities in the country, graduate students at the University of California Santa Cruz (UCSC) went on a wildcat grading strike in December and are now organizing for a full strike, beginning February 10.

Graduate student workers at the 10 UC campuses across the state receive the same wages—$2,434 a month, which after taxes amounts to just over $18,000 a year, given that we are only paid for nine months.

Most UCSC grads spend more than half of their wages on rent: a bedroom in a shared apartment in graduate student housing on campus costs $1,200, similar to the median rent for a bedroom in shared housing off campus.

The full strike is the latest escalation in the campaign for a cost-of-living adjustment (COLA)—an additional $1,412 a month for all graduate students, to cope with the cost of rent. 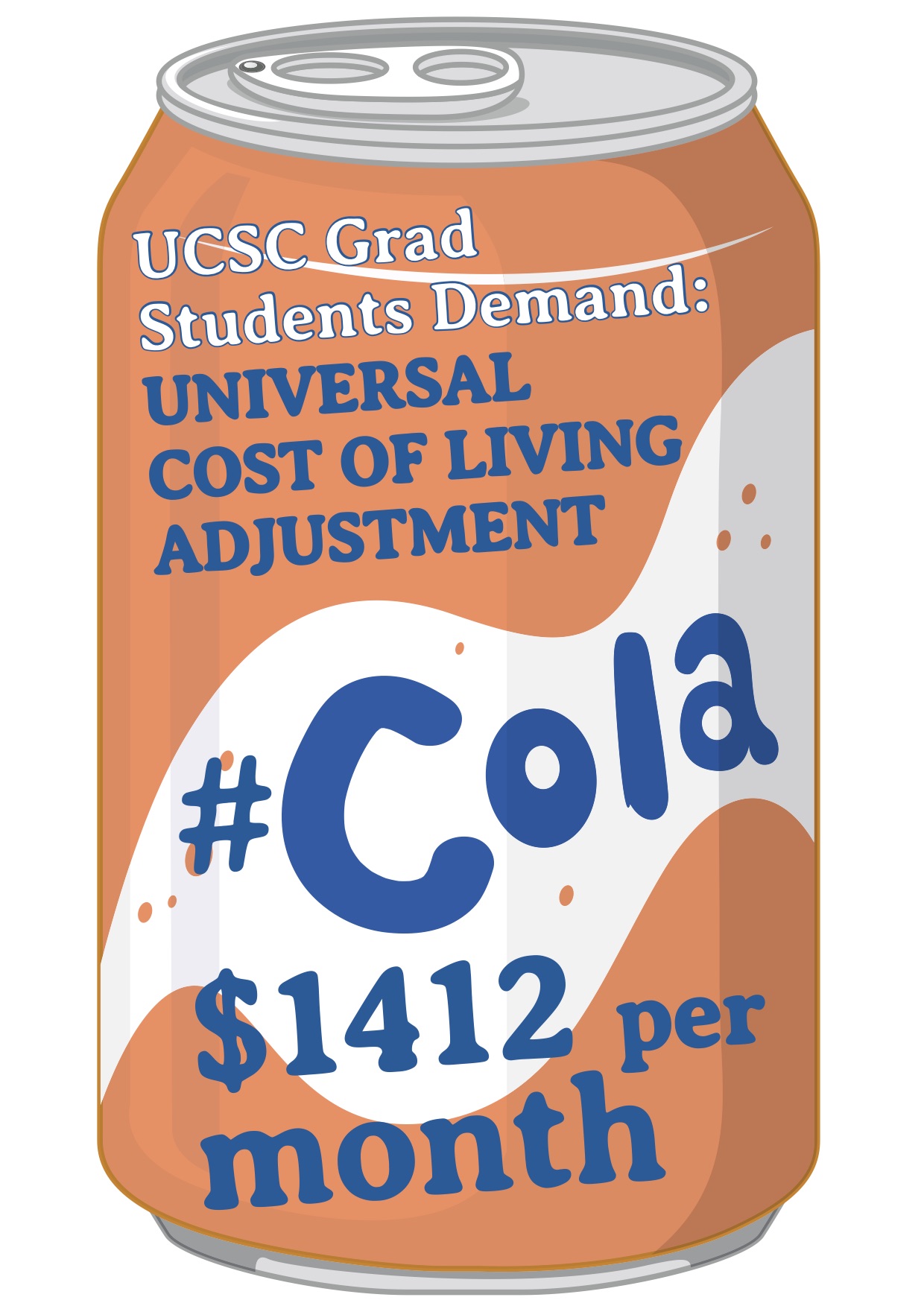 Graduate students are demanding a $1,412 a month cost-of-living adjustment to cope with the area's exorbitant rents.

Graduate students provide indispensable labor, accounting for the vast majority of teaching, grading, mentoring, tutoring, running labs, and research that happens at the university. For a typical graduate student our labor amounts to 60 to 80 hours a week, yet we are not compensated enough to live where we work.

Many commute to Santa Cruz from hours away. Others sleep in their cars and sometimes in motels. Many skip meals and forego medical procedures to make rent. International students who do not have university jobs for the summer have to sublet their apartments and leave the U.S. because their visas prohibit off-campus employment. Student parents consider dropping out because they anticipate not being able to afford the new privatized childcare that is meant to replace a university-subsidized childcare center in May of this year.

Since our grading strike began, graduate students at five other UC campuses—Los Angeles, Santa Barbara, San Diego, Davis, and Berkeley—have also launched cost of living adjustment campaigns in solidarity with UCSC and to respond to the rising cost of rent in their communities.

Santa Cruz grad students were frustrated with the contract that was settled by our statewide union, Auto Workers (UAW) Local 2865, in the summer of 2018. It included a 3 percent annual wage increase, but that amount fell far short of addressing the skyrocketing cost of housing, which members across the state had identified as a top bargaining goal.

Although UCSC members voted overwhelmingly against the contract, it was ratified by 58.6 percent of members statewide, though many members were frustrated that the ratification vote was held over the summer, when students are not on campus. UCSC graduate students felt we could not wait for the next round of bargaining in 2022 and had to address our rent issues immediately.

Last year, the statewide union cut the Santa Cruz chapter’s funding for meetings and campus organizers and took away our ability to email local members directly. That’s when a group of us decided to use the resources of the student government to organize for the COLA campaign.

Twelve people ran on a COLA slate last May and filled all elected positions of the UCSC Graduate Student Association (GSA). Both GSA and UAW chapter resources and infrastructure were used to advance the campaign.

On January 27, for the first time since the strike began, Chancellor Cynthia Larive—who receives a $6,700-a-month housing stipend on top of her salary—addressed the UCSC community in an email. She announced two programs “to support graduate students.”

One program is a $2,500-a-year needs-based housing supplement, which does not offset the rent burden of UCSC grads. The second program guarantees five years of funding for PhD students and two years for MFAs—which is welcome but insufficient, as long as it only guarantees years of poverty wages.

In the same email, the chancellor notified us that all student workers withholding grades “will receive a written disciplinary warning,” and students who deleted grades from a university grade-management portal “will receive a student conduct summons.”

Incensed by the threats, graduate students decided to escalate to a full strike. Alongside teaching assistants, instructors, readers, and graders who participated in the grading strike, graduate research assistants will also be withholding their labor in this escalation.

The strike has drawn support from Santa Cruz councilmembers, the local and national labor and academic community, students on other UC campuses, and most importantly, workers, faculty and undergraduate students on our own campus.

Many undergrads wrote “Give them COLA” on their final papers and exams—the grades for which they are yet to receive.

At the time of writing, more than 1,400 undergrads have signed a petition in solidarity refuting the chancellor’s claim that they are “harmed” by the strike. Hundreds of faculty members and entire departments came out with statements of support for the striking graduate students, and promised not to retaliate against strikers, despite the pressure from the administration. Other unions and workers on campus have vocally supported and endorsed our strike.

The UCSC administration has mostly been quiet since the strike began, except for a few emails. Despite the repeated attempts by the students, admin has continuously refused to come to the table, arguing that any negotiation would be illegal while student workers have a union contract that is in effect until 2022.

Yet after the statewide UAW 2865 leaders issued a letter demanding that the UC bargain over the cost of living, a meeting between management and the statewide union was called for February 5. The situation in Santa Cruz was discussed at length, but no COLA offer has been made.

Flight Attendants Tell Airlines: Don't Even Think About Concessions
Full Steam Ahead on Reopening Schools? No Way, Say Teachers
Maine Shipbuilders Bring the Hammer Down to Reject Concessions
In the Face of Mass Unemployment, We Need a 21st Century WPA