Labor for Bernie Activists Take the Political Revolution into Their Unions 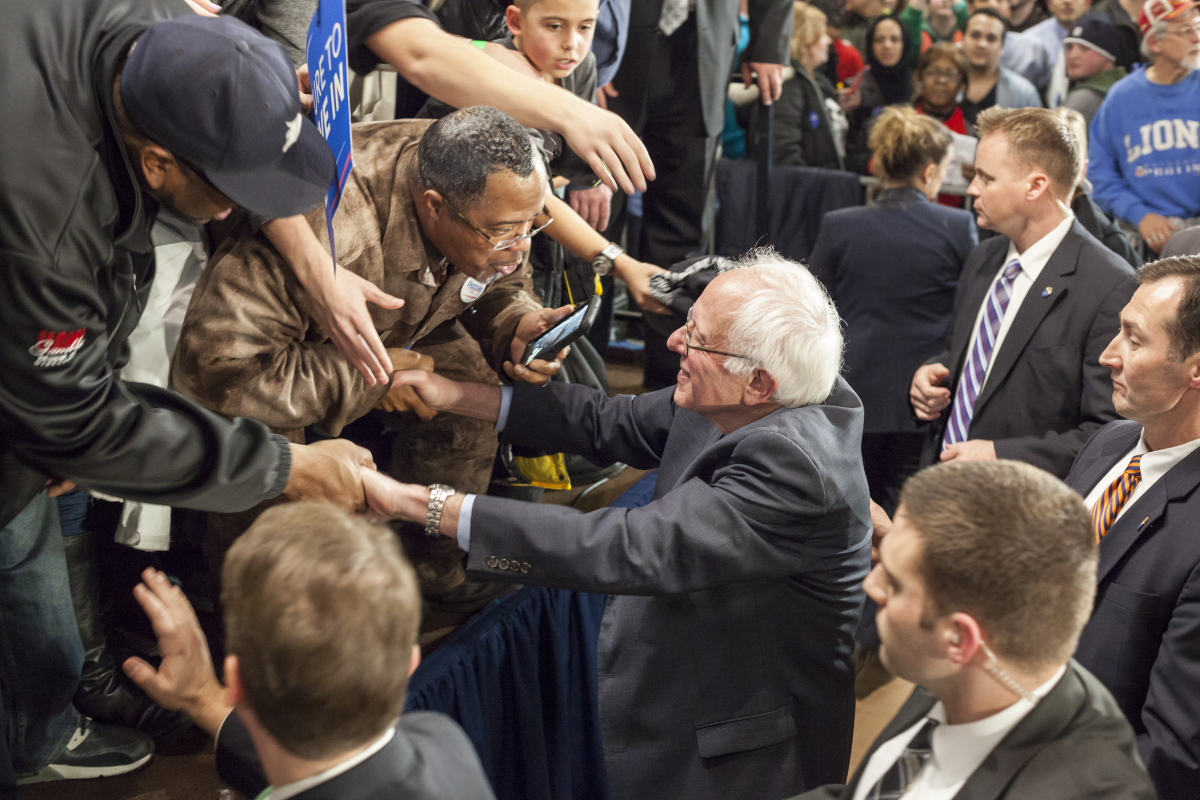 Last June a small group of volunteers kicked off a network called “Labor for Bernie.” Their goal was to build support inside their unions for Senator Bernie Sanders’ presidential campaign.

Since then, Sanders has come a long way—racking up primary wins in nine states, including a major upset in Michigan. The all-volunteer Labor for Bernie operation has come a long way too, growing to include tens of thousands of union members.

CWA made its endorsement after polling its members online—and after Sanders rallied with Verizon workers who are battling for a contract. The candidate is a longtime advocate for postal services, which impressed the Postal Workers. He’s also a lifelong proponent of single-payer health care, NNU’s signature issue. Nurses have crisscrossed the country on their union’s “Bernie Bus,” talking to voters.

The latest big union to endorse Sanders was the Amalgamated Transit Union. In a March 14 press release, President Larry Hanley cited the senator’s “longstanding fidelity to the issues that are so important to working people.”

One of Labor for Bernie’s top achievements has been to block an AFL-CIO endorsement, once presumed to be in the bag for Hillary Clinton. President Richard Trumka announced in February that there would be no endorsement at the federation’s winter executive council meeting.

Labor for Bernie had submitted 5,000 signatures last summer urging the executive council not to make an early endorsement. While many international unions have endorsed Clinton since then, Labor for Bernie has helped publicize opposition in the ranks and push local endorsements for Sanders.

The lack of a primary endorsement “means that union members and other working Americans are not going to be facing a coordinated campaign from the AFL-CIO for the other candidate,” said former CWA President Larry Cohen, who has campaigned for Sanders across the country. “It’s a green light for people to do what moves them, and that’s what democracy looks like.”

Labor for Bernie has been a central clearinghouse for members campaigning for their local unions to endorse Sanders. Its website offers a model endorsement resolution, workplace leaflet, and sign-up sheets for supporters. It’s also using social media to promote the Sanders campaign with union members, garnering 25,000 “likes.”

Ariana Eakle, a third-year apprentice with Electrical Workers (IBEW) Local 124 in Kansas City, tailored a version of the resolution for her local. She estimates she’s had members of 15 IBEW locals around the country contact her to get a copy.

After hundreds of IBEW members signed a Labor for Bernie petition last year, new President Lonnie Stephenson announced the International would not make an early endorsement. More than 30 IBEW locals have since endorsed Bernie, thanks to grassroots organizing by members like Eakle.

In every case, said Local 153 member Carl Shaffer, “it’s been a part of a democratic process. None of these endorsements represent a top-down action by a couple of leaders on their own.”

Some Sanders supporters whose national unions endorsed Clinton have taken to social media and the press to challenge top-down, undemocratic decisions.

The Food and Commercial Workers came out for Clinton in January. But a month later, Northern California UFCW Local 5, whose 28,000 members work in grocery and food processing, endorsed Sanders.

The executive board vote was 30 to 2, according to Mike Henneberry, the local’s director of communications and politics. He said the local hasn’t gotten any pushback from the International. “For us, it was not a very difficult decision,” he said. “Compare an individual who’s been supporting workers since he was mayor of Burlington with someone who’s been on the board of Walmart.”

Some Service Employees members too have struggled to reconcile their union’s strong support for a $15-an-hour minimum wage with their International’s endorsement of Clinton, who only backs $12.

“I never thought I would see involvement like there was when Obama ran,” said Vice President Ken Roos, who works as a Medicaid administrator for the state. “But people were stopping me in the hall at work, or even in the street—they would say, ‘Bernie’s the man, we gotta go for Bernie.”

The campaign has collected tens of thousands of email addresses and other contact info for union members who pledge to support Sanders. A recently created workplace flyer includes a tearoff pledge card. Info from the cards is entered into a database so that supporters can be reminded to go out and vote.

Local “Labor for Bernie” groups have sprung up in dozens of states and cities, bringing together members of various unions to strategize about how to expand support for Sanders in their local labor movements.

In Seattle, hundreds of union members—including Machinists, teachers, and public employees—turned out to a February kickoff where they heard reports from Cohen and local union leaders about the campaign.

Metro Detroit Labor for Bernie formed a speakers bureau that sends members to local union meetings to talk about the campaign.

“We understood that, in order to have conversations with people, we had to talk about more than Bernie,” said Asar Amen-Ra, a member of Auto Workers Local 1248 who got involved with the group last fall. “We had to talk about the principles he represented—a living wage, universal education, universal health care.”

Amen-Ra’s local represents workers at Chrysler’s Mopar facility in Centerline, Michigan. He and his co-workers built on the organizing they had done for a “no” vote on the recent Chrysler contract. A core group of six original organizers grew to 20.

“We just said, ‘Hey, we’re going to have a conversation at lunchtime about politics, about this presidential campaign,’” he said. “And we would get anywhere from two to 10 people at a time.”

There’s nothing wrong with traditional canvassing and phonebanking, Amen-Ra argues, but unions should go further. He’s taking the time to have detailed one-on-one conversations with co-workers about politics “because we want to organize beyond these elections,” he said.

“We want to build a political transformation, and that means building a community—and you can have that community in the workplace.”

Another place to find community is where you live. Kevin Mack, who’s active in IBEW Local 58’s Minority Caucus, helped get a dozen members from his local to knock on doors in their own Detroit neighborhoods.

“When you stick at home, people can relate to you,” he said. “They see you at the grocery store, or with your kids. You can say, ‘Hey, I live right down the street. That’s my mom’s house over there.’”

Mack is 28. Pundits are largely crediting young voters’ high turnout and pro-Bernie enthusiasm for the surprise win in Michigan. Sanders won 81 percent of the 18-to-29 vote there.

Labor for Bernie’s focus now is on the Democratic primaries. The network is trying to mobilize support among union members in the remaining primary states. Supporters in states that already voted are phonebanking to get out the vote.

Meanwhile, Labor for Bernie organizers are also trying to chart their next steps. This is the first time in decades that a national movement of this scale has come together around a candidate with an unapologetic allegiance to working class concerns and aspirations.

It’s evident that there’s broad support in unions for Bernie’s platform—and that many members, fed up with their unions’ legacy of “blank check” support for corporate Democrats, want a more inclusive, democratic process for deciding endorsements.

Can the unions backing Bernie agree on an ongoing strategy to build working-class political power? Once the presidential nomination is wrapped up, will they opt to carry this “political revolution” into contests for elected office in thousands of municipal and state-level races?

Those questions will be on activists’ minds at a national meeting of Labor for Bernie activists, part of the upcoming Labor Notes Conference.

“Our endorsement for Sanders is the best that we’ve ever made,” said Myles Calvey, business manager of IBEW Local 2222 in Boston, “and most certainly the most enthusiastic one for our membership.”

Rand Wilson is a staff member at SEIU Local 888 in Boston and a volunteer with Labor for Bernie 2016, a volunteer effort that’s neither funded nor directed by the Sanders campaign. Dan DiMaggio is the assistant editor of Labor Notes. Learn more at laborforbernie.org.

This probally had more of an effect changing the mind of the afl cio leadership. Started by a rank and file IATSE member. Myself actually.... The bernie sanders subreddit allowed me to reach the most people. labor for bernie particapated of course, they did post the petiton once i believe.

No question, your petition was really important! Labor for Bernie shared it widely.