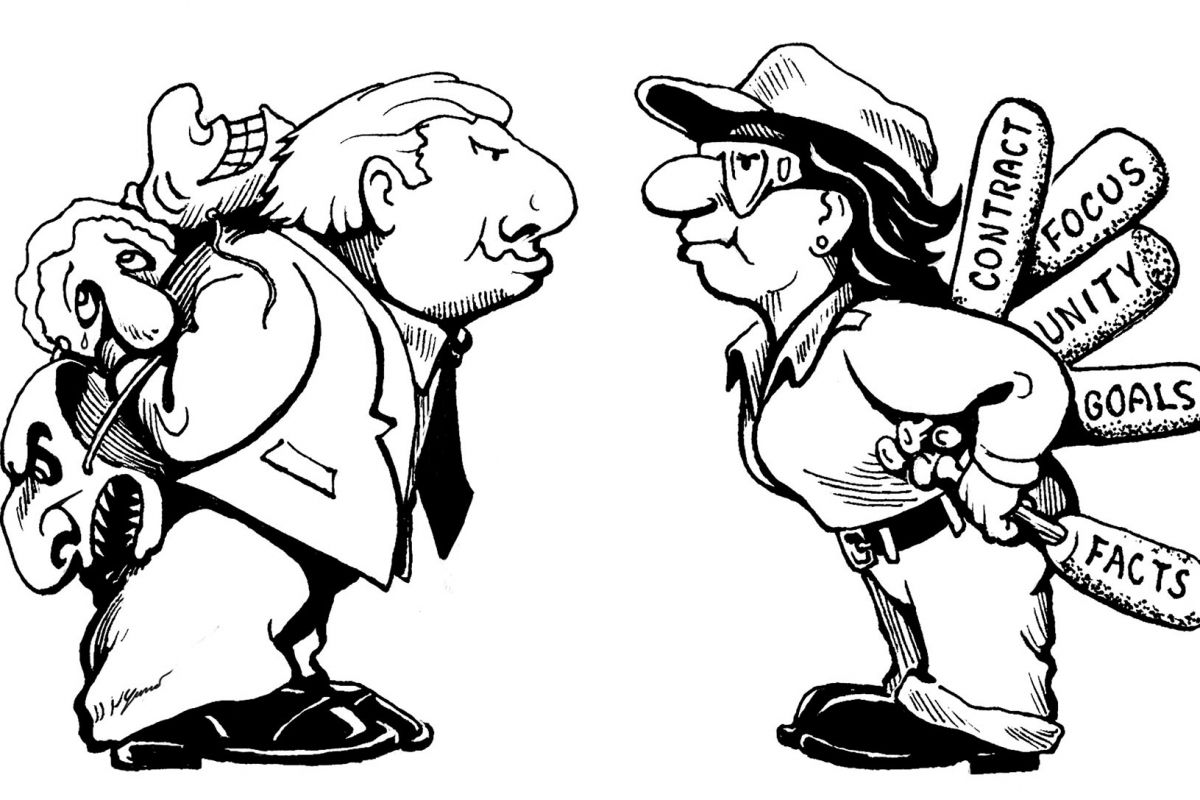 This article, adapted from the author’s popular workshop, first appeared in Teamster Voice, the newspaper of Teamsters for a Democratic Union.

Supervisors have various strategies to try to put stewards off, trip you up, or get around the contract.

There’s no one-size-fits-all strategy for dealing with difficult supervisors. But being prepared can help you feel more confident, be more effective, and avoid getting caught off guard.

Before approaching the supervisor, write down the relevant facts and keep your goal in mind. What is the problem? What is the remedy you want? What is a reasonable timeline for getting the problem resolved?

Before a hearing, prepare enough so you’re comfortable presenting your case and can back it up with copies of the contract language, supporting documentation, witness testimony, and other relevant facts.

These are the “Don’t know” or “Do-nothing” sups. They’ll do anything to avoid the steward, pass the buck or postpone action.

“Don’t let a supervisor blow you off,” says Teamsters Local 804 UPS Alternate Steward Domenick DeDomenico. “If they say they can’t meet, set a specific date and time when they can.

“If they say ‘It’s out of my hands’ or they can’t do anything, ask whose hands it’s in, and bring your issue to the next level in the chain of command.”

Some supervisors use threats and intimidation. If your supervisor is abusive, take notes and document the threats. File a harassment grievance if necessary.

Sometimes group action can back a supervisor off. A group of custodial workers, members of my union, Teamsters Local 805, were being yelled at and insulted in public by their supervisor.

Workers met with their steward. Together we brought a group grievance to human resources. The workers felt they were being discriminated against, and we told management we were prepared to file an Equal Employment Opportunity Commission charge.

We got an agreement that the supervisor would talk to employees about their work performance only in his office—not publicly embarrass them.

Sweet-talkers are difficult because they might be friendly, even well-intentioned, and you might not want to offend them if you confront them.

But you need to—otherwise you’ll continue to get vague promises and no actual change. “Get supervisors to commit to a concrete remedy and get it in writing,” says Teamsters Local 206 Union Representative Leonard Stoehr.

“Don’t give them forever to implement it. If you’ve already given them a chance to resolve an issue, you may need to escalate by filing a grievance or taking your complaint to a higher up.”

Supervisors don’t like having stewards pin them down on problems. A common tactic is to change the subject or bring up unrelated problems.

Don’t take the bait. Stay focused on the problem or incident and what you want done about it. Refocus them on the issue by saying, “We’re not here to discuss that, we’re here to discuss X.”

“When I see a member get frustrated or thrown off-subject, I suggest a break and bring the member outside for a few minutes to caucus,” says Bill O’Bayley, a Teamsters Local 805 steward at White Rose Foods.

“We make a plan to refocus the meeting and get back on track.”

Flamethrowers will yell, scream, or curse at you to try to push your buttons.

Try to keep your cool and stick to the issues. Use the grievance procedure instead of getting into shouting matches.

“The thing I’ve learned works best with supervisors is being knowledgeable of the contract and dealing with them in a calm, controlled tone,” said Ralph Merideth, a Teamsters Local 150 steward at UPS in Sacramento.

“The key is to be firm, be willing to listen, and be able to present a reasonable solution based on the contract.”

If a steward finds that he or she has to fire back against a flamethrower, make sure that it’s done in front of a group, and that it’s planned. Stewards are allowed to confront management—including yelling back—when they are performing their duties as stewards, under the “Equality Rule.”

The rule doesn’t permit everything, though. Read Bob Schwartz’s book The Legal Rights of Union Stewards for more info on the rule and other rights of stewards.

Sandy Pope is president of Teamsters Local 805 in New York, and was a 2011 candidate for the union’s international president. Visit tdu.org for more advice and news from Teamsters for a Democratic Union.