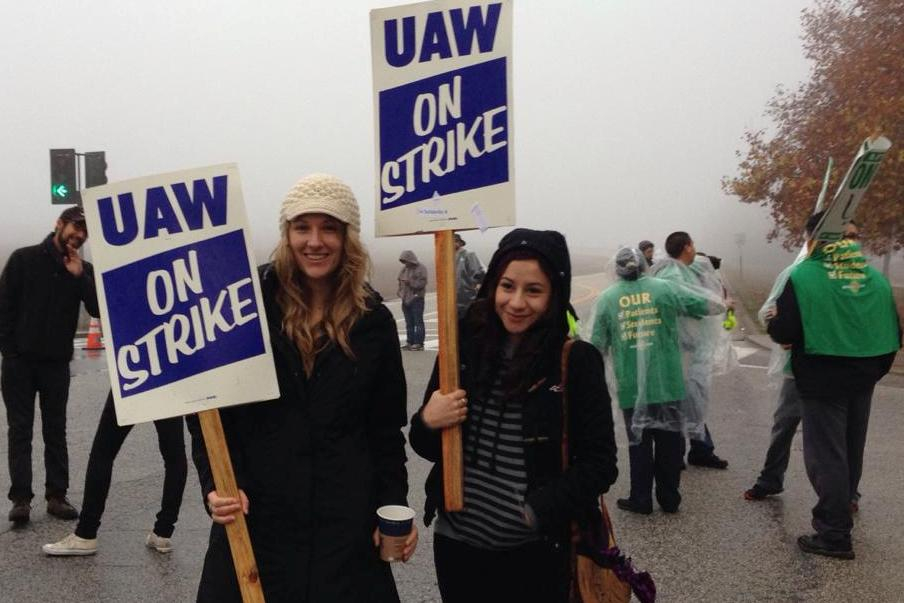 University of California graduate employees struck in sympathy with UC service workers in AFSCME. A reform caucus in their UAW local created a vigorous contract campaign that made gains this year. Photo: Brian Malone.

This week 13,000 teaching assistants, readers, and tutors at the University of California ratified a new four-year contract.

We made big gains on both bread-and-butter and social justice issues, with a 17 percent wage increase over four years, new language on class size, longer paid parental leaves, a larger child care subsidy with expanded coverage, a new committee to equalize opportunities for undocumented students, and a mandate to create lactation stations and all-gender bathrooms. (See box.)

It’s a good moment to look back on how we got here. This is the first contract since our reform caucus, Academic Workers for a Democratic Union, took the helm of our union, UAW Local 2865, in the spring of 2011.

Caucus Agitated from Below

AWDU was formed in 2010 by a small group of graduate students from Berkeley and Santa Cruz, who soon linked up with fellow grads at other campuses across the state. We’d been active in the 2009 student movement to save California public higher education, and we were critical of our union leaders for sitting out that fight.

Some of the caucus’s founders had even been on the bargaining team, but had grown disenchanted with the local’s top-down functioning. They felt that our union was giving too much away, and that winning a decent contract would require mobilizing the rank and file.

Class size: Management agreed to two labor-management meetings per year on class size, and a mechanism for members to get information about section sizes and student-teaching assistant ratios. This will allow our members to track changes to the ratios, and intervene.

Childbearing leave, which was four weeks paid, will increase to six weeks paid plus two weeks unpaid. New language ensures that members will not face retaliation following such a leave.

We intend to use these protections and meetings to push for the establishment of at least one all-gender restroom in each campus building.

So our first campaign was pressuring the bargaining team and local leaders to push for real gains in the 2010 contract.

At Berkeley, we held weekly meetings to discuss the latest developments in bargaining, develop educational materials for co-workers, and plan the organizing we each did in our own departments.

Outside of official union channels, we organized a “grade-in” at Berkeley’s administration building, to show our work and unity. We also used our strength at Berkeley to pass a resolution in our campus’ membership meeting, setting our “bottom-line” demands for the new contract.

Negotiations were closed-door, with very little communication to members. So we showed up en masse to demand entry, which pressured both the union and management.

Sit-In to Count the Votes

Still, the final agreement was far from acceptable. The annual pay raise, 2 percent, was less than the projected rate of inflation. Except for an increase in the childcare subsidy, the union made little progress. We organized for a statewide “no” vote.

We lost—but a record 40 percent voted no, and turnout was the highest in recent memory. Plus, the vote-no effort was a great way to get AWDU’s message out. We gained a lot of momentum across the nine UC campuses our union represents.

The following spring we ran a full slate of candidates to lead the local. The election was hard-fought and acrimonious.

We had a thin majority in our favor, but we were stunned when the incumbents’ allies on the elections committee decided to stop counting the ballots half-way through. Their plan was to delay the count for two months, and refer the ultimate decision to the incumbent officers!

Faced with what we felt was an attempt to steal the election, we occupied our union offices at UCLA and UC Berkeley for several days, demanding a complete count. By the end of the week, the count resumed. We swept all 10 seats on the statewide executive board and a majority of the seats on the statewide council.

Once in office, we began recruiting stewards in each department. At Berkeley, we established a stewards’ council. We opened all union meetings, including those of the Executive Board, to all members. And we ran the Executive Board more collectively, ending the president’s special powers.

We agreed that any information that could be shared with members, without creating legal problems or compromising the local, should be shared, so we increased communications through frequent emails, social media, union meetings, and department-based organizing.

We also encouraged moving decision-making power from the Executive Board to more local bodies, whenever possible.

The next academic year we organized with the Occupy movement and the movement to re-fund California’s social services and public education. Union officers, members, students, and other workers faced off against police—and dealt with police brutality and arrests.

The experience brought in a whole new group of rank-and-file activists. After ten years of increases, we won a UC tuition freeze. Through a ballot initiative, we also partially restored state funding of higher education.

Though we were not in contract negotiations at the time, we got the university to improve student health insurance, which benefited all UC students, not just our members.

In preparation for the 2013 negotiations, we circulated an in-depth survey about what we should prioritize. Rather than just mail or email it, we made it an “in-person” tool as much as possible, so that stewards and activists would have conversations with members.

We took the survey results to our first-ever statewide bargaining convention, which generated a preliminary set of bargaining demands. Then we made a big push to get out a vote on the demands.

Our statewide Anti-Oppression Committee, which works on issues of racism, sexism, xenophobia, and homophobia/transphobia, helped shape the demands. This is easily our most active and dynamic committee.

Lactation stations will provide clean and secure facilities for new mothers to breastfeed and refrigerate breast milk, while all-gender bathrooms will help alleviate the stress and discomfort that many transgender and genderqueer students have experienced using single-gender bathrooms at work.

We put all of our demands into a document we circulated to members and posted around our workplaces as an organizing tool. Packaged together in this way, the list of demands represented our vision for the type of workplace we are fighting to create. The list was a tool to argue that we did not have to make a trade-off between bread-and-butter issues and social justice issues, but that we could fight for—and win—both, if we ran a strong campaign.

Our wins on these issues will benefit not only our members, but our whole campus community.

We also spent money to hire rank-and-file members as internal organizers. These staff organizers, elected reps, and stewards worked together to identify and recruit new activists through department meetings and door-knocking. The hiring took a large financial outlay, but it paid off in contract gains.

Democracy at the Table

Previously, bargaining had been run by our international union’s representative, with elected leaders playing only a small role. Bargaining sessions had always been closed.

This time, with an AWDU majority on the bargaining team, we made clear that the international rep would not only not be running bargaining, but that he would be there only in an advisory capacity. Rather than having a chief negotiator, we decided we wanted everyone on the team to get experience leading negotiations.

Most important, we fought for and won “open bargaining,” meaning that rank-and-file members were able to attend all sessions, except those with a mediator. We also sent members regular, detailed bargaining updates.

It was obvious that our employer preferred dealing with our international rep. Instead, we forced them to deal with several elected leaders at the table, and with members who came in and explained what the demands meant to their lives. We also hired an experienced outside advisor to help us forge our own path.

Another way we broke with the past is that we were willing to let the contract expire so that we could legally strike. The only real thing we lost was binding arbitration, and we gained the right to strike over grievances.

We did strike, twice. One of these strikes was in solidarity with our fellow workers in AFSCME 3299, the statewide local that represents service workers at the UC. Two additional planned strikes, one over a grievance and the other over unfair labor practices, were called off when the university capitulated.

We are very proud of the contract we’ve negotiated, but we didn’t win our full list of demands, so we hope to make further gains away from the table.

In particular, there’s strong interest in fighting for dependent health care coverage, for affordable housing at the university, and against the so-called “18-quarter rule,” which limits the number of quarters that graduate students are eligible to work as teaching assistants. Of course, we’ll also be organizing to enforce the new contract provisions.

Last month, members made clear their commitment to this model of unionism by re-electing an AWDU majority in our 2014 election. We’re looking forward to three more years of rank-and-file-led troublemaking at the UC.

Katy Fox-Hodess is a doctoral student in Sociology at the University of California, Berkeley, and currently serves as Guide on the UAW 2865 statewide Executive Board.

The article has been slightly updated to clarify that AWDU is a statewide caucus, and to correct that only one of the called-off strikes was over a grievance (the other was over unfair labor practices).