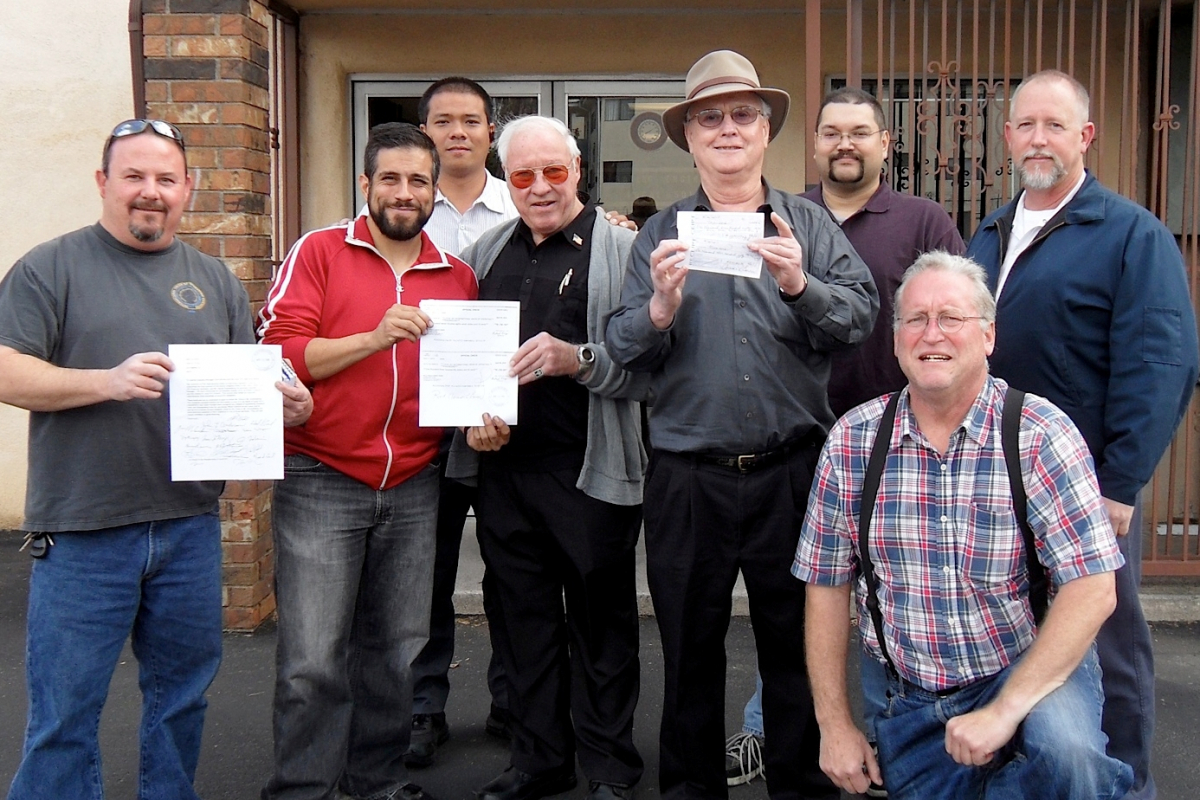 Reformers in the Operating Engineers union have attracted a national following among members by daring to sue their international officers for corruption, while also running to take over their southern California local.

They call themselves The Resistance.

In the 400,000-member union of skilled crane, bulldozer and boiler operators, mechanics, and surveyors, dissent is uncommon, and union staffers have hiring influence with employers.

But Finn Pette, an engineer and longtime member of IUOE Local 501 from Los Angeles, said his group is working day and night: leafleting worksites, holding meetings, and hosting barbecues with supporters in southern California and southern Nevada.

The IUOE has seen past local reform efforts in different parts of the U.S., but officials’ control over hiring has made insurgency easy to repress, said Herman Benson of the Association for Union Democracy, which has advised the reformers about their rights.

“Pette is taking the lead to link together opposition people across the country,” Benson said. “It could be a real encouragement to others in the Operating Engineers.”

The international has never had a contested election for president. Current President James Callahan was the chosen successor of Vincent Giblin, who, Pette says, removed his group from office in order to protect a corrupt Local 501 crony.

Both men are named in the lawsuits, along with the entire international executive board and several employers.

An unintended consequence of the campaign has been to create a network across the country, as more and more people subscribed to the email list of an anonymous member blogger: Johnny, the Man in Black.

Pette and the Resistance slate, along with the other plaintiffs in the suits, are among few critics willing to go public—but the email list has grown, said Pette, to more than 5,000 members.

“This is what a union should be: people sticking together for the right reasons for the right thing,” Pette said. The local election takes place in August.

Pette’s conflict with local and international officers began in 2007, when he was Local 501 financial secretary. Together with business manager James McLaughlin and assistant business manager Dan Himmelberg, he investigated improper spending by apprentice manager Dennis Lundy.

They brought in an outside auditor, who backed up their claim that Lundy—by then promoted to Western Regional Director—had embezzled almost $30,000.

Giblin pressured the three officers to drop their investigation of his friend Lundy, according to Pette. When they refused, the international filed counter-accusations against them and told them to resign—or else the local would be trusteed or split in two.

Forced out of office, the three were barred from running in 2010 local elections because of the charges against them. But the Department of Labor finally overturned that election in October 2011, saying their rights had been violated, and ordered a re-run in the next election cycle.

The DOL took no action on the embezzlement allegations.

As the former officers’ investigations continued, the findings of corruption multiplied. They found that money had been embezzled from their local benefit funds, so members of California Locals 501 and 12 filed two civil class-action suits under the federal Racketeer Influenced and Corrupt Organizations (RICO) statute.

The DOL defines labor racketeering as “infiltration, domination, and/or use of a union or employee benefit plan for personal benefit by illegal, violent, or fraudulent means.”

The plaintiffs claim union officers including Lundy—and their relatives—received kickbacks as part of the scheme.

The list of complaints in the suits is staggering: they range from underfunding or misusing the union’s pensions and training funds, to threatening members, using union money and resources—including a private jet—for personal use and profit, making union deals with their own, friends’, and relatives’ businesses, and double-breasting (when a union lets an employer expand an operation with nonunion workers).

The plaintiffs claim all this violates both their contracts and the law. The alleged financial crimes add up to millions of dollars. They are confident they have documented illegal activity.

“Everything we’ve got is all in writing,” said Jay Brophy, a retiree plaintiff. “It’s all stuff sent between them.”

Their proposed remedy includes putting the international union in receivership and repaying money that was taken or misused.

International spokesman Jay Lederer would not comment on the suits. He said the international has no involvement in local elections and does not think the election and the lawsuits are related.

Pette had hoped, when he originally contacted the Department of Labor after being prevented from running for office, that the agency would also take action on the illegal activity.

Instead, after ordering a new election, the DOL closed the case.

Now, after years of trying to get action on Pette’s case, two Congressional Republicans are investigating the DOL’s actions—or lack thereof.

Further complicating the issue, named in one of the RICO suits is former IUOE general counsel Richard Griffin, a recent Labor Board recess appointee by President Obama. (The president withdrew the nomination Tuesday as part of a deal with Senate Republicans over his nominees to various executive posts.)

The plaintiffs say Griffin was involved in forcing them out of office. They suspect he was aware of, if not complicit in, the cover-up of Lundy’s corruption.

The idea that Republican lawmakers would be eager to capitalize on corruption scandals within politically connected labor unions is not lost on Pette, who calls himself a staunch Democrat—but sees limited avenues to clean up his local.

“It’s not political for us. We love our union,” Pette said. “We have systems of government that are supposed to help us. We do expect help from politicians.”

Though he has documented criminal activity for the DOL for years, Pette says, he has no knowledge of either department investigating the Operating Engineers.

The Resistance slate faces many obstacles. Pette said he worries members won’t know that this election came about because of a federal investigation: the DOL has not properly notified members about what the local and international union did wrong, nor that it has stepped in to monitor this election.

Current officers are listed as incumbents on the ballot—even though the government ruled they had rigged the previous election. And Pette accuses the incumbents of intimidating members and limiting his access to worksites and union meetings.

Though Pette is confident the three suits will have serious consequences for the union, he is skeptical what would happen with a government takeover.

With few exceptions, he said, unions taken over in similar cases have not seen power restored to members’ hands: “It doesn’t do us any good to win the RICO case and lose the war.”

So he is putting all of his energy into winning the election in August.

“You’ve got the Cinderella story,” Pette said. “We lost the first round; we are hoping we can win this one.”

A version of this article appeared in Labor Notes #412, July 2013. Don't miss an issue, subscribe today.