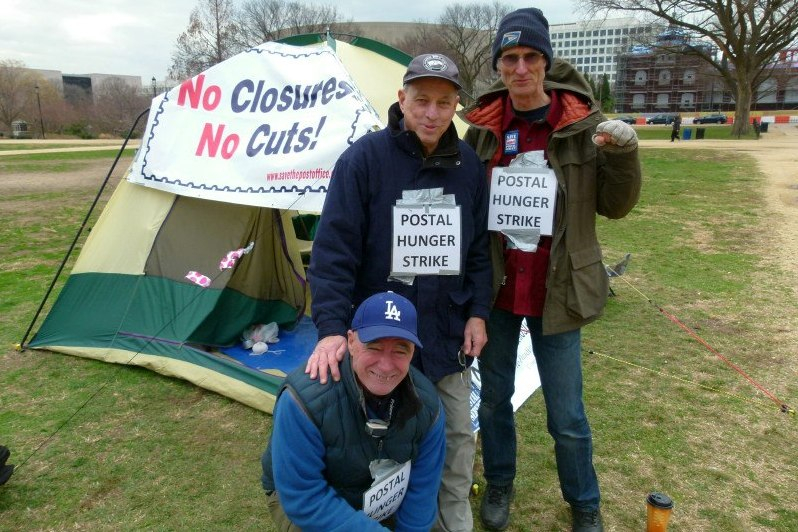 Letter Carriers across the country will rally March 24 to save Saturday mail delivery. Activists in the rank-and-file network Communities and Postal Workers United, who staged a December hunger strike on the National Mall, are highlighting the many-faceted attack on postal services. Photo: Joe Piette.

The National Association of Letter Carriers is calling for a national day of action March 24 to save six-day delivery. Hundreds of actions, in every state, are being organized to persuade Congress, which must vote by March 27, to keep Saturday delivery. Find out here about events in your area.

But the rank-and-file network Communities and Postal Workers United (CPWU) is urging unions and the public to mobilize for the March 24 rallies and raise other demands as well: save door-to-door delivery; reverse the closures of mail plants and offices; stop the privatization of trucking; and stop the sale of post offices and the delay of the mail.

One-third of the nation's post offices are up for sale, many of them historic buildings with Depression-era murals by Works Progress Administration artists.

The Postal Service is attempting to contract out thousands of union trucking jobs to private firms. In February, 99 more sorting facilities began the process of closing. More than 100,000 postal jobs will be eliminated, and half of all processing plants are scheduled to close by the end of the year.

Postal customers are already experiencing delays in mail delivery and workers in the “consolidated” plants face mandatory overtime and speed-up.

And on February 6, Donahoe announced the August 10 elimination of Saturday delivery, which will lead to the loss of another 80,000 postal jobs, mainly city and rural letter carriers.

Downgrading for a Reason

The Postmaster General’s latest moves to downgrade service reinforce the conservative talking point that the private sector would be more efficient.

Piecemeal privatization has been ongoing since the 1971 Postal Reorganization Act took the Post Office out of the federal budget and established the non-profit U.S. Postal Service. It includes postage rate subsidies for bulk business mailers who pre-sort their mail through private mailhouses; attempts to contract out delivery to new housing developments; a “village post office” option where small-town convenience stories sell stamps and collect mail; and even subsidizing competitors UPS and FedEx by having letter carriers do some of their “last mile” deliveries.

Leaders of the Letter Carriers (NALC), who represent 200,000 city postal carriers, have insisted that the March 24 rallies focus on saving Saturday delivery, to the exclusion of all the other attacks on postal workers, facilities, and service to customers.

The other letter carriers' union, the 100,000-strong National Rural Letter Carriers Association, is supporting the day of action. However, the American Postal Workers Union (which represents 200,000 inside clerks, maintenance workers, and truck drivers) and the National Postal Mail Handlers (which represents 35,000 inside laborers) have remained silent about it to date.

Facing the inaction of their national leaders—and prompted by CPWU activists—the APWU's twice-yearly gathering of local union presidents passed a resolution in February calling on their union's locals and state bodies to join the day of action.

The postal union leaders' focus on electing politicians and lobbying Congress has produced no solution to USPS's "financial crisis."

The Postal Service deficit was created by Congress itself in a 2006 mandate that drains 10 percent of the USPS annual budget into a pre-fund for retiree health benefits—75 years in advance. This was not the first time Congress has used the USPS as a “cash cow” for the U.S. Treasury, but this time, with the Great Recession, it’s bankrupting the service.

Despite electing hundreds of "allies" to seats in Congress, for years the unions have been unable to secure any positive postal legislation. A bill passed by the Democratic-controlled Senate last year ensured the elimination of Saturday delivery and door-to-door delivery (forcing customers to use corner “cluster” mailboxes), without ending the onerous pre-fund mandate.

Together, the four postal unions are the nation's largest unionized workforce. Postal workers brought commerce to its knees in 1970 with a wildcat strike that catapulted their wages and benefits from poverty level to some of the best-compensated blue-collar jobs in the country.

In the first decades after the historic strike, the four postal unions bargained and lobbied together. Although they grew apart, they did stage a unified national day of action in September 2011, to support legislation that would have fixed postal finances. Since that time, however, the APWU and NALC have been divided on legislative strategy, supporting competing amendments to postal legislation, and even calling different days of action in April 2012.

Each postal union still maintains the right to strike in its constitution, however. The kind of unity and power wielded by postal workers during the 1970 strike may be the only way to stop the death spiral of cuts and closures that is leading the USPS into union-free privatization.

Jamie Partridge is a retired letter carrier and an organizer for Communities and Postal Workers United.