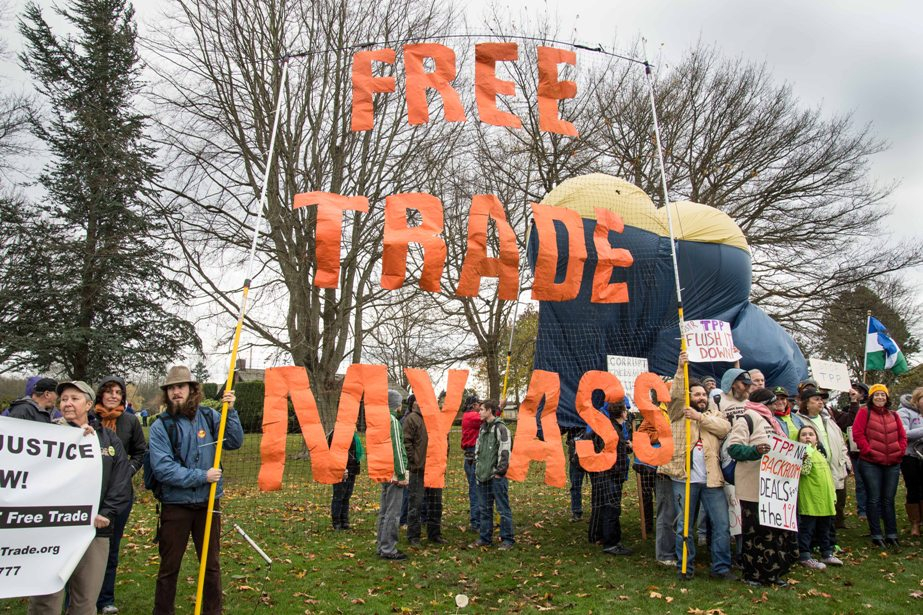 Hundreds of activists from both sides of the border rallied against the Trans-Pacific Partnership, which would expand NAFTA-like rules to 11 countries around the Pacific Rim. Photo: Citizens Trade Campaign.

Several hundred activists raised the alarm about the Trans-Pacific Partnership, also known as “NAFTA on steroids,” December 1, as they rallied in the rain at the border crossing between Washington state and British Columbia.

The TPP, backed by the three NAFTA governments, would include 11 countries around the Pacific Rim. John Hively, a bus driver and Amalgamated Transit Union member from Portland, Oregon, called it “an income redistribution plan—to transfer income away from the 99% to the 1%.

NAFTA gave corporations in the U.S., Mexico, and Canada the power to sue governments for legislation or policies, such as environmental regulations, that they claim harm their profits. These cases are decided not in regular courts but in secretive “investor rights” arbitrations.

For instance, the American oil and gas company Lone Pine Resources is suing the Canadian government for $250 million over Quebec’s moratorium on fracking in the St. Lawrence Valley.

By removing tariffs on imports and weakening governments’ regulatory power, the TPP would make it even easier for corporations to move their operations to countries with cheaper labor. Shoe manufacturer New Balance has warned that the 3,000 remaining U.S. jobs in its industry are at risk if shoe tariffs with Vietnam are eliminated, Hively said.

“Once those jobs leave the community,” he added, “it reduces the tax base for teachers and firefighters, which in turn means more job loss.”

Tina Turner-Morfitt, an AFSCME member in the Department of Corrections in Salem, Oregon, said the flight of jobs overseas also puts downward pressure on wages and standards in the jobs that remain. “We should be improving human rights and working conditions,” she said, “not lowering them through the TPP.”

The Washington State Fair Trade Coalition led the action at the Peace Arch, dubbed “The People’s Round on the Trans-Pacific Partnership.” The Council of Canadians, Canada’s largest citizen organization, did the organizing on the Canadian side.

Joe Fleetwood, president of the Maritime Union of New Zealand, joined the rally by Skype. A trinational unity statement was read. Organizers aim to get 1,000 groups in Mexico, Canada, and the U.S. to sign on to the statement.

University of Washington student Teresita Bazan-Beltran, who is from Mexico City, spoke at the rally and performed as part of the artist-activist group Seattle Fandango Project. In Mexico, she said, the influx of genetically modified seeds encouraged by NAFTA has damaged native corn and depleted the soil, making Mexican farming less sustainable.

These changes, combined with subsidized corn imports from the U.S., have spurred “mass migration away from rural communities.” She is concerned the TPP will mean even more genetically modified products.

Meanwhile, the big drug companies are already seeking longer patents in the TPP negotiations. That will mean higher prices for consumers, including those with life-threatening illnesses, said Celeste Drake, a trade policy specialist with the AFL-CIO in Washington, D.C. “Whether government is able to regulate for things like food safety matters to families,” she said.

After rallying in the park, the activists moved indoors for learning sessions and to plan future work. The 15th round of TPP negotiations took place in Auckland, New Zealand, in early December. The negotiations could finish as soon as 2013. Then it will be up to each country to ratify the treaty.

Colleen Garbe, president of Public Employees Local 116, which represents support workers at the University of British Columbia, said Canada lost a lot of good local jobs after NAFTA. She is concerned they will lose even more to the TPP.

Canada is also in the process of negotiating pro-corporate treaties with China and the European Union, her husband Greg Garbe pointed out.

Under these proposed deals, too, secretive arbitration panels will make decisions about any legislation investors don’t like. And while any party to NAFTA can withdraw from the agreement on six months’ notice, the notice period for withdrawal from the Canada/China investment treaty is 15 years.

“Through these investment treaties, decisions about environmental and labor rights get made by the corporations,” Greg Garbe said. “Our democracy will be gone if our vote means nothing.”

Blair Redlin is a union researcher, recently retired from the staff of the Canadian Union of Public Employees in Vancouver, B.C. To read more about the Trans-Pacific Partnership and what activists are doing, see tppxborder.org and Citizen’s Trade Campaign.

Related
Gearing Up for Bargaining, Canadian Union Pushes for a Greener, Better Postal Service »
Don’t Compromise on Farmworker Rights »
Viewpoint: Will Your Local Union Sign On to Ask the WTO to Waive Patents on Covid Vaccines? »
General Motors Returns to Oshawa—But Offers Only Second-Tier Jobs in a ‘Pop-Up’ Plant »
‘No Increase? No Work!’ Toronto Health Care Workers Save Pandemic Premium via Job Action »