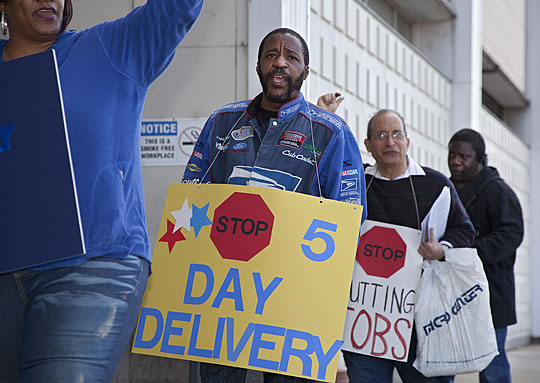 Postal workers are asking for your help to save the vital services they provide, along with their jobs and unions. Postal Service management is planning to close more than 100 local post offices, consolidate others, and end Saturday delivery.

Management says these changes will “improve competitiveness” and respond to gaping budget shortfalls. The Letter Carriers (NALC) are calling these the most dramatic changes in the Postal Service’s 230 years and say the changes will slow deliveries throughout the week, drive away more customers, and open the door to further cuts. The move would eliminate the equivalent of 49,000 full-time jobs.

According to Cora Haywood, a Memphis postal worker campaigning against the cuts, moving to a five-day delivery cycle would hurt the elderly especially, who receive medicines via the mail.

Along with several other locals nationwide, Postal Workers (APWU) Local 72 in Cleveland is taking action, hosting informational pickets to save local offices. According to local president Danny Pride, East Cleveland’s population is more than 95 percent people of color and closing their post office would both harm both the city’s tax base and the community. “Our job is to inform the public and our officials: everyone is entitled to universal mail service,” Pride says. He criticized the USPS for deciding to close offices without input from residents or representatives.

Actions in the streets and pressure on elected officials to “Save Our Stations” have saved some, but more action is needed. Last May, the Postal Service announced that more than 3,200 stations could be closed, but thanks to the postal workers, letter carriers, and their allies, that list shrank to 162 as of January.

Visit apwu.org to learn about the campaign to keep Saturday delivery, write your representative in support, and learn about local actions to save neighborhood post offices.

A version of this article appeared in Labor Notes #376, July 2010. Don't miss an issue, subscribe today.
Related
How Postal Workers Saved the Election »
Your Letters and Parcels Are Piling Up Thanks to the New Privatizer General »
Milwaukee-Area Letter Carriers Are Refusing to Go Along with Mail Delays »
‘Postmaster DeLay’ Takes One Step Back amid Media Scrutiny, Public Protest, and Worker Resistance »
Postal Day of Action: "We Need the Postal Service!" »