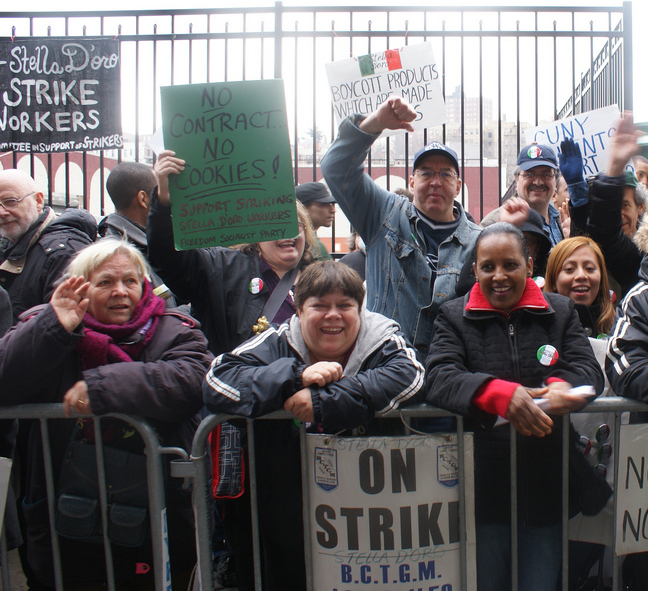 Not a single member crossed the picket line during the 11-month strike at Stella D'oro's New York cookie factory. The company wanted to cut wages to $13, from $18-$22. Photo: Micah Landau

After a grueling 11 months on strike, workers at the Stella D’oro cookie factory in New York returned to their jobs victorious in early July. But the win may be short-lived: they were greeted by a notice from the company that it intends to close the plant in 90 days.

Workers and strike supporters savored the triumphant march back into the factory, a rarity in an era of few strikes and fewer clear-cut wins for union workers. None of the 134 strikers, members of Bakery Workers (BCTGM) Local 50, had crossed the picket line.

Surviving on $100-a-week strike pay and unemployment benefits, they fought off the company’s demands for dramatic cuts to wages, vacations, and health care. Workers are paid between $18 and $22 an hour, and the company’s owner, private equity firm Brynwood Partners, wanted $13.

“They wanted to take everything from us, change our entire way of life,” said Mike Filippou, a steward.

Management claimed the concessions were necessary to bring the company back to profitability. When union officials asked to see the financial records, however, the company refused to turn them over. The union filed complaints with the National Labor Relations Board, which were upheld June 30.

The ruling mandated that strikers be reinstated immediately under their original contract terms, and ordered back pay for loss of earnings and health benefits incurred since May. The union is still calculating how much each worker is owed.

The union was also given rights to the 2007 company financial report, a crucial step in its next task, finding a buyer to keep the factory doors open.

The NLRB issued its decision after a three-day hearing in May where Stella D’oro workers packed the courtroom each day with up to 100 workers, supporters, and their families.

“We won because first, we were right, and second, we were united,” Fillipou said.

In a too-rare display of active community support, other union members and community allies formed a strike support committee that bolstered picket lines, planned increasingly large rallies, and raised money for the strike fund. The committee also set up a boycott drive, focusing on local grocers. Workers said the effects of scab production were clear.

“The factory used to be hundreds of experienced people who knew what to do from A to Z. After the scabs took over, it took them two months to produce their first cookie,” Filippou said. “And they were terrible.”

Joyce Alston, Local 50’s president, said the company’s shutdown might be illegal. Workers added that they think the plant-closing threat is a negotiating tactic. It came as no surprise, regardless.

“We see they’re trying to scare people,” said George Kahssay, leader of the strike, “but we know how to fight.”

Having succeeded at forcing their employer to obey the law, Stella D’oro workers now must take on a newer and tougher struggle to keep their factory open. They are learning from other union workers facing shutdown threats—like Quad City die casting workers and HartMarx apparel-makers in Illinois—that the fight relies on building political and community pressure.

Workers say their goal is to keep Stella D’oro producing cookies in the Bronx. So far, the company has not expressed any interest in selling, but Local 50 and its supporters are seeking a responsible buyer who will respect the union and keep the factory open.

“The company works in low blows,” Filippou said. “We didn’t strike 11 months for nothing. Our position isn’t going to change.”

Related
Employers Are Using the Crisis to Push Concessions They Don't Need »
Turn the Tables: Demand Concessions from Your Employer »
Maine Shipbuilders Bring the Hammer Down, Reject Concessions »
Akron Professors Vote No on 'Hit List' Layoffs that Would Tear Up Contract »
Viewpoint: Concessions Are Back. So Are the Flashbacks. »